Xbox One or PS4: Which Current-Gen Console to Buy?

The eternal battle between Microsoft and Sony consoles will continue for at least another generation. But while Scarlet and PlayStation 5 don't arrive, which video game from the current wave should you buy: Xbox One or PS4?

In this article we are going to show you the pros and cons of each console. We will then issue our impartial and impartial opinion to assist you in this difficult decision. Look! 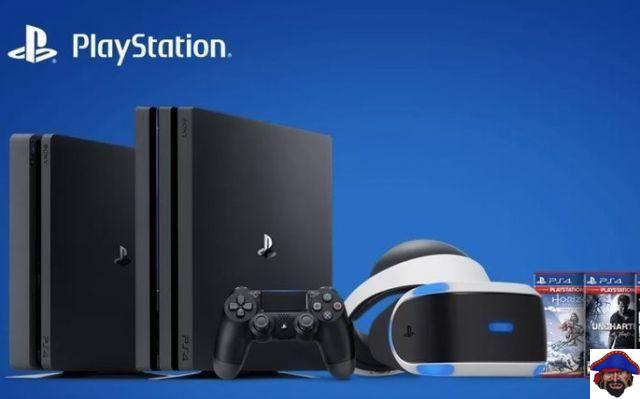 Everyone knows that the PlayStation 4 sold more units than the Xbox One. But sales don't mean everything. That's why you need to evaluate all the points before opening your wallet. In the case of Sony, we have to decide between the PlayStation 4 Slim and the PS4 Pro, since the original model you will hardly find on sale new.

If you have a television with 4K technology, the PS4 Pro is definitely the best choice. The processor is much more powerful, which means improved performance over the Slim. The graphics look beautiful on a proper TV, especially if the HDR effect is turned on. Today the Pro is a little below R$ 3.000,00.

If you don't have a 4K TV or simply don't have the financial means to purchase the Pro model, the Slim is more than satisfactory. Today you can find a new Slim starting at R$2.100,00, but if you buy it in a Sony Bundle, the price is close to R$2,500,00.

All Sony models have only one HDMI input. There is a USB port on the back and two on the front, as well as an Ethernet cable port. The Pro has an optical output that the Slim doesn't. In both models you can replace the hard drive with one of your choice, which can be an advantage.

In terms of internet connectivity, there is nothing to worry about. All models have 802.11 ac Wi-Fi plus the possibility of connecting a cable.

You need to take the size of the console into account. The Slim is the smallest of all the major consoles of the current generation. Despite not running 4K, it has the same library of games as the Pro and runs all of them at their highest quality. The Pro is much larger, so you have to keep in mind the space in which you will place the video game in your home.

As stated above, the PlayStation 4 Pro runs 4K and HDR, but it's not native. In addition, it cannot reach 60 FPS in practically any game.

The Pro's 4.2 TERAFLOPs guarantee an absurd performance compared to Sony's two previous consoles. The Slim itself is pretty powerful, at least more powerful than the first two Xbox Ones.

In terms of memory, there is not much to evaluate. 3.5GB of RAM on every PS4 is believed to go into the operating system, while the rest is given to developers for games. In the end, the graphics and even the performance in games itself will depend on the way each studio creates its games.

See below the technical specifications of Sony consoles:

Something that is certainly decisive at the time of purchase is the games that you will have at your disposal. Many titles are made for all platforms, but certain games are exclusive to their consoles. And the PS4 exclusives are just too much. Here are the top 12 in our opinion:

While Sony exclusives are often rated superior to Microsoft's, we point out that the PS4 is not backwards compatible with the PS3. Something the Xbox One has over the 360.

See in detail which PS4 to buy.

Find out what ALL the next PlayStation 4 releases will be!

The Xbox One is Microsoft's favorite child and has gained a lot of space after the X Scorpio version. It managed to come very close to the PlayStation family in terms of quality and even surpassed Sony's consoles in many respects.

Just as we recommend that you buy the PS4 Pro only if you have a 4K TV, the same advice is valid with the Xbox One S or X. Especially if you are going to buy the S. It is far inferior to Scorpio in everything, having a worse GPU than the S. of the PS4 Slim. If you can't or don't want to pay for a super TV, but want an Xbox One, stick with S.

All Xbox Ones have two HDMI cable inputs. There are 3 USB ports, Ethernet cable input. As Kinect has practically been discontinued by Microsoft, you need an adapter to use it. Also, there is no way to remove and replace the hard drive of any of the models.

The Xbox One S is smaller than the original model and came with Ultra HD Blu-Ray support. In addition, it has HDR and 4K, as long as your TV has the corresponding technology to do so. The X is a little bigger than the S, but it's in the Scorpio's power that we notice its greatness.

Let's be honest: it is much better than the PS4 Pro. Its 6 TERAFLOPs and its native 4K make some games run at 60 FPS without any performance loss. In addition, the 12 GB memory, 9 of which are dedicated to games and only 3 to the operating system, makes games run smoother and more agile.

Remember, however, that Scorpio's maximum power will depend on several factors. TV and the way the developers created the game are some of the main ones.

Below you can check the technical specifications of each Xbox One:

Just as Sony has its exclusives, so does Microsoft. And they are not far behind in terms of quality! We've also broken down the Xbox One exclusives you need to play:

Important to say that Xbox One is backwards compatible with previous generation games. Something the PS4 doesn't have.

Which console to buy: Xbox One or PlayStation 4?

From the analysis we did, you've certainly come to a conclusion. If not, let's get to it: if you don't have or can't have a 4K television, go with the PlayStation 4 Slim. If you already have a TV or are going to buy one, buy the Xbox One X. Its performance is better, and there is no comparison in terms of graphics and resolution it achieves.

But of course: exclusive games are also important. You won't be able to enjoy classics like God of War if you opt for an Xbox One. If you like racing games, Forza is the best, and it will never be available on Sony consoles. That's why you need to weigh which titles you want to play above all else.

And finally, the price. Today the Xbox One is worth more in terms of spending. The Scorpio is a little more expensive than the PS4 Pro overall, although I find it in some places for less. It's a matter of weighing the cost-benefit, if you haven't decided whether it's Team Sony or Team Microsoft.

add a comment of Xbox One or PS4: Which Current-Gen Console to Buy?