Sony has unveiled the PlayStation 5 controller, officially called DualSense, and fans around the world now know what the next controller for the new generation of consoles will look like.

While we still don't know when the DualSense will be in our hands, we do know a lot about the PlayStation hardware history. From the original analogue-less PlayStation controller to the never-released “Boomerang”, Sony has repeated its designs in successful – and not-so-successful ways.

Check out the article below (courtesy of IGN) for the history and evolution of PlayStation platform controllers, including the brand new DualSense. 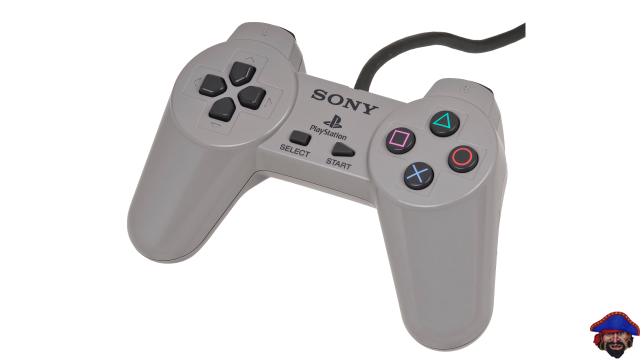 “The Super NES was a big hit at the time and naturally we wanted SNES players to upgrade to our system. That's why the management department doesn't want the controller to be a radical game - they said it had to be a standard type of design, or players wouldn't accept it."

While Sony wanted to copy the SNES controller, it did innovate in some areas, like the second pair of shoulder buttons that would help navigate 3D worlds. As gamers had to switch their hands from the L1+R1 buttons to the L2+R2 buttons, Sony also decided to add the grips to the controller to make the transition easier.

The buttons on the PlayStation controller were supposed to represent what actions they represented. According to Goto, the blue cross (or X?) and red circle represented “yes” and “no”, the triangle was the point of view, and the square was similar to a piece of paper that informed players that this button it was made for menus. 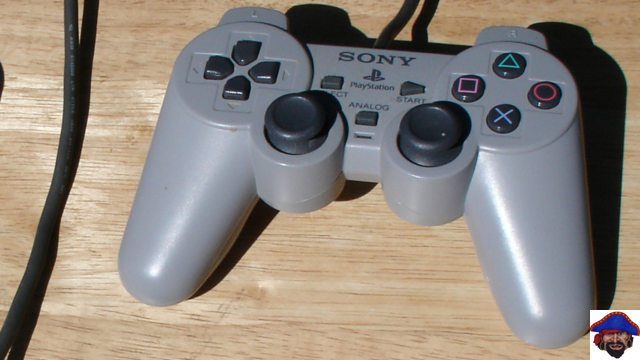 The PlayStation Dual Analog Controller was a predecessor to the DualShock and introduced the two analog sticks for the first time.

It was released in Japan in 1997 alongside Tobal 2 and Bushido Blade and included a vibration feature that would initially be dropped from the North American and European versions.

“We evaluated all the features and decided, for manufacturing reasons, that the most important thing for gamers was the analog feature”, a Sony spokesperson said regarding its removal, which wouldn't matter too much as the DualShock would add it back and replace this controller the following year.

Finally, the Dual Analog controller had a “Flightstick Mode” that would work with games like MechWarrior 2, Ace Combat 2 and Colony Wars and was an alternative to the FlightStick Analog Joystick. 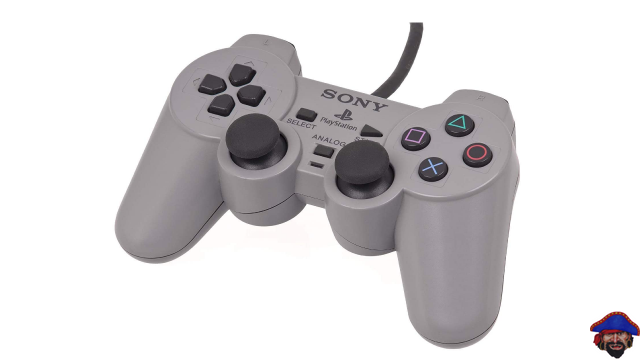 The DualShock replaced the PlayStation Dual Analog controller in 1997 in Japan and North America and elsewhere in 1998 and beyond.

The DualShock sported a vibration feature and its name was derived from the two vibration motors that were housed inside the controller's handles. In 1999, Ape Escape was the first game that required the use of DualShock.

The PlayStation 2 would be released in 2000, and the original DualShock would be compatible with most games except those that needed the DualShock 2's analog sticks. 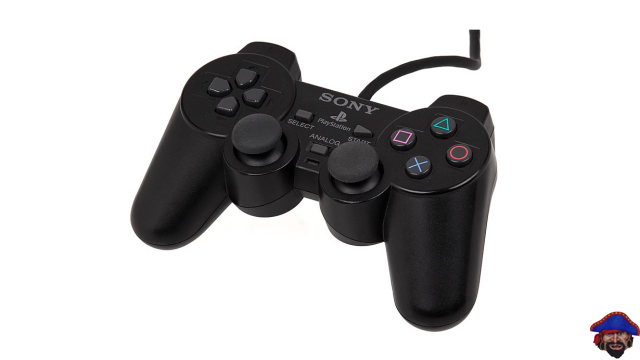 The DualShock 2 was released alongside the PlayStation 2 in 2000 and was similar to the original DualShock bar: some cosmetic changes, a squarer connector, and pressure-sensitive analog sticks.

The DualShock 2 could be used on the original PlayStation and would work on the PlayStation 3 with third-party accessories, although certain games that used Sixaxis functionality would not always work correctly. 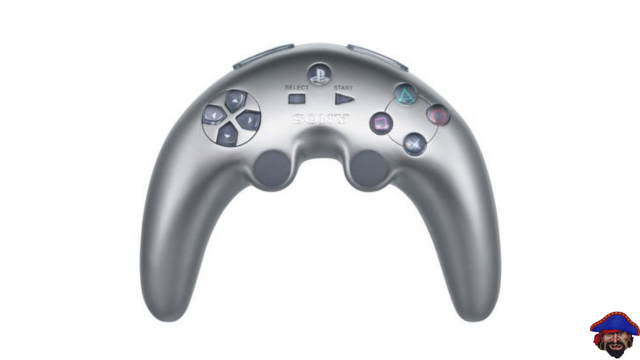 While the PlayStation 3's "Boomerang" controller was never released, it stunned the world with its radical design that looks... well... a boomerang.

It was shown at E3 2005 during the PlayStation 3 reveal, but interestingly, it wasn't highlighted or focused during the main presentation. It was simply displayed in windows in the event hall.

The Sixaxis would replace this wild design, but the Legendary Boomerang would live on for many years to come.

Sony finally commented on the controller, saying it was a model they wanted to have ready for the PS3 reveal. After its first showing, the design team took the feedback seriously and decided to go with the much more familiar DualShock controller. 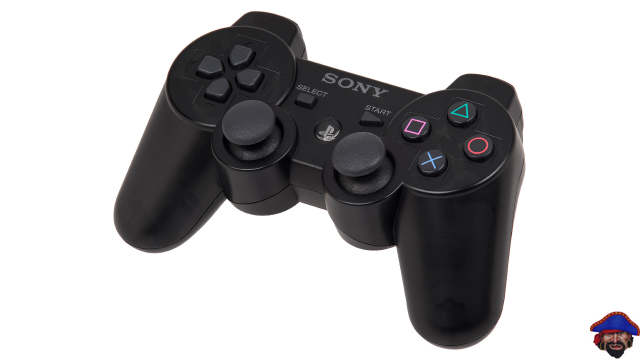 Sixaxis was included in the PlayStation 3 when it was released in 2006. It was the first wireless controller official Sony and was able to detect motion with “six degrees of freedom” but lacked a vibration feature.


Games like Warhawk and Lair were designed around Sixaxis, which was a much lighter controller due to the lack of noise.

The DualShock 3 launched with the PlayStation 3, but a 2004 lawsuit by Immersion caused Sony to remove the vibration features while it was in the appeals process.

Immersion sued Sony and Microsoft for patent infringement relating to vibration functionality. Microsoft eventually settled down, but Sony decided to continue the fight in court. Sony ended up losing and the verdict forced Sony to pay $90,7 million to Immersion and it ended up stopping sales of the controllers in question. Sony immediately appealed, which meant it could keep selling the controllers in the process, but lost. In 2007, Sony and Immersion agreed to settle the litigation and would work together to "explore the inclusion of Immersion technology in PlayStation format products".

Finally, this would allow Sony to launch the DualShock 3, as was originally planned in 2007. 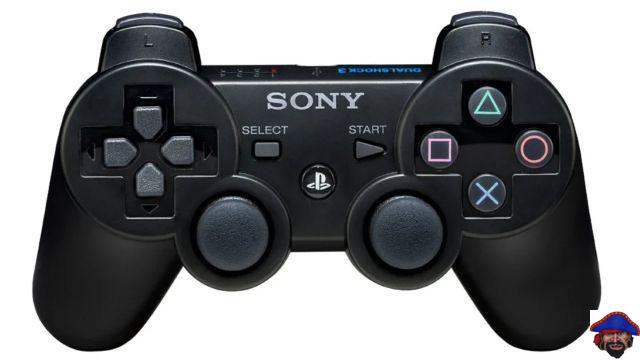 In 2007, a year after the launch of the PlayStation 3 and the Sixaxis controller, Sony announced the DualShock 3 at the Tokyo Game Show. It would eventually replace Sixaxis and finally bring back much-requested haptic feedback.

Also, the DualShock 3 wasn't much different from the Sixaxis, despite weighing about 40% more because of the new vibration motors.

Sixaxis would be discontinued in 2008, making the DualShock 3 the standard PlayStation 3 controller. 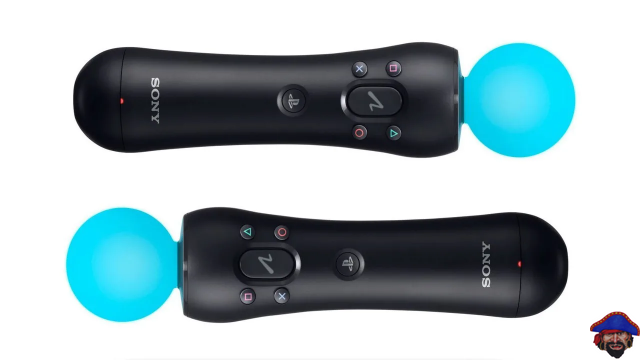 PlayStation Move controllers were originally released in 2009 for use with the PlayStation 3 and were available during the movement's renaissance, which also featured the Nintendo Wii Remote and Microsoft Kinect.

After launch, Move support was included in major titles like Killzone 3, Dead Space: Extraction, Gran Turismo 5, and more. Many of them used various other accessories, such as the navigation controller that would add another analog stick, the PlayStation Move Sharp Shooter, which was a weapons controller with a slot for the Move and the PlayStation Move Racing Wheel. 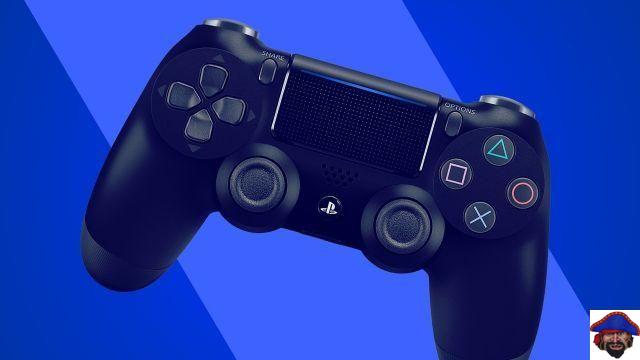 The DualShock 4 launched alongside the PlayStation 4 in 2022 and featured not only a capacitive front touchpad and motion detection, but also a light bar on top of the controller that could illuminate in many different colors.

The light bar, flashing red and blue when the cops were chasing you in GTA V or mimicking Alien Isolation's motion tracker, was also designed with PlayStation VR in mind. This caused problems before the release of the PlayStation BR, because no one really understood why this light bar was needed and Sony still wasn't willing to reveal all its secrets.

“The tracking light… it was our department that said we need it”, said SCEE Senior Designer Jed Ashforth. “It was for tracking VR, and when all this stuff came out six months ago and everyone was 'reflecting on my TV', we were going 'oh no' because we couldn't tell anyone what it was for.”

The START and SELECT buttons seen on all previous PlayStation controllers have been replaced by the OPTIONS and SHARE buttons, respectively. The SHARE button allows players to upload screenshots, videos and more quickly.

The dual joysticks have been tweaked and, like the Dual Analog controller, have built-in grooves. The L2 and R2 buttons were more curved and facing outward than the Dualshock 3 style.

Around the time the PlayStation 4 Pro was released in 2022, Sony released an updated version of the DualShock 4 that allowed you to play games with it while connected to a USB cable. And the ability to see the lighbar at the top of the touchpad. 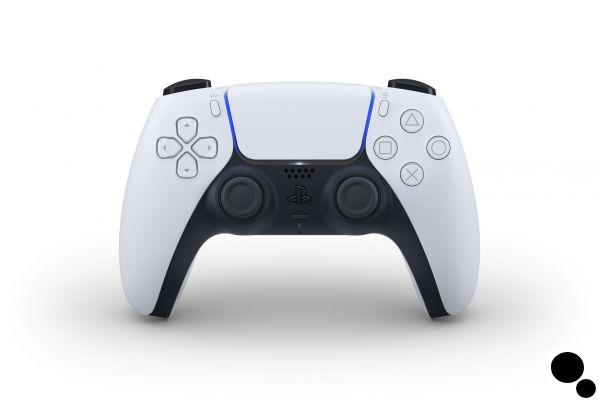 The PlayStation 5 controller has been revealed and it is called the DualSense. It was said that he “brings a sense of touch to PS5 gameplay” and will retain many of the DualShock 4's features while adding new functionality and a refined design.

The DualSense will have much more advanced haptic feedback and adaptive triggers for the L2 and R2 buttons.

Tactile feedback will add "a variety of powerful sensations you'll feel when you play, like the slow hardness of driving a car through mud." Adaptive triggers, meanwhile, will help you to “feel the tension of your actions, as when you draw a bow to shoot an arrow”.

Additionally, the DualShock 4's SHARE button will be replaced by the CREATE button, though Sony isn't ready to fully detail what this change means.

The DualSense also has a two-tone design, unlike previous controllers. The light bar will also be found on either side of the touchpad.

add a comment of The evolution of PlayStation controllers