The 20 best Atari games for those who are just nostalgia!

The classic Atari console (also called the Atari 2600) featured several heavyweight titles that are still remembered today. Several of its games debuted entire genres, started franchises that last to this day, or still serve as a model for current games. If you're nostalgic or just curious to see the best games from the 80's, check out the 20 best games on the Atari console below! 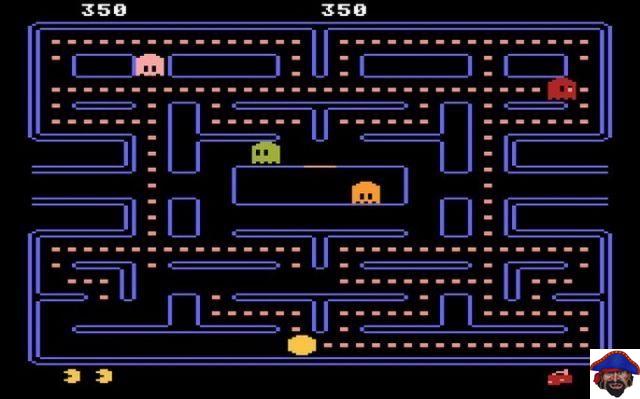 The classic of classics. Pac-Man needs no introduction. The little yellow monster made its first appearance in Atari where it had to collect small coins while avoiding being hit by ghosts. Long life! 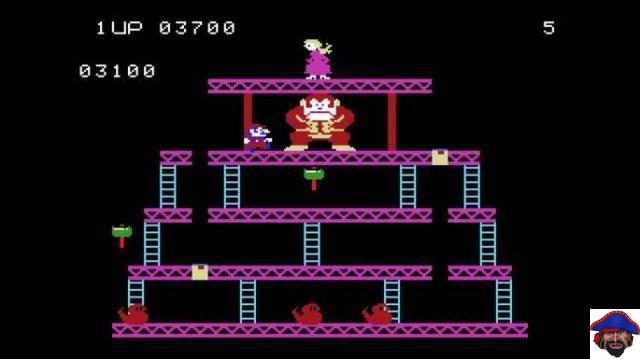 Nintendo's most famous monkey didn't start his career as a good guy. In his first Atari game, Donkey Kong was actually a villain who tried in every way to prevent Mario from reaching Princess Peach on top of a building. 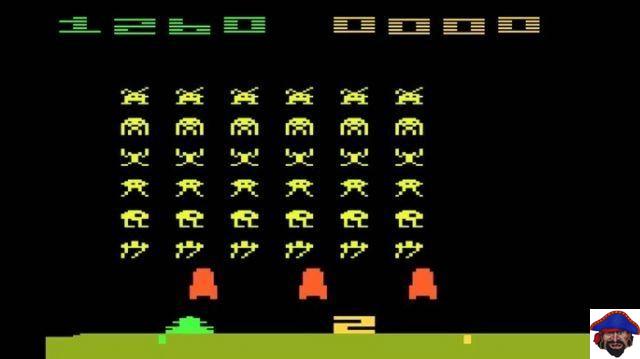 Yet another game that is basically the face of the Atari platform. Within its genre, Space Invaders was the most successful title at the time, and it put you in control of a little spaceship with the objective of destroying all the aliens. The stages became more and more difficult and a lot of reflex was needed to avoid the opponent's attacks. 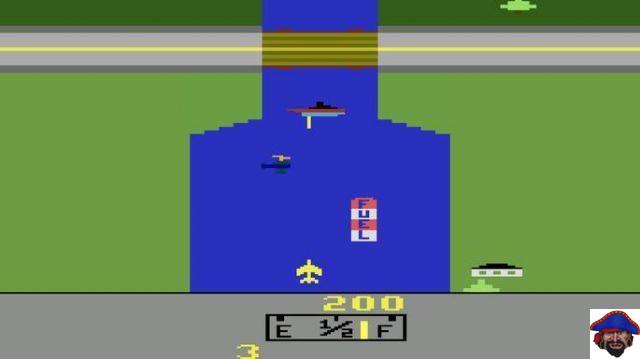 River Raid was one of Atari's most innovative games. Unlike most other plane/ship games, here the screen wasn't fixed, and you had to fly over a river with a moving screen that always presented more obstacles ahead. The game also innovated with the possibility of controlling the speed of the plane and with a fueling system. The game sold over 1 million copies. 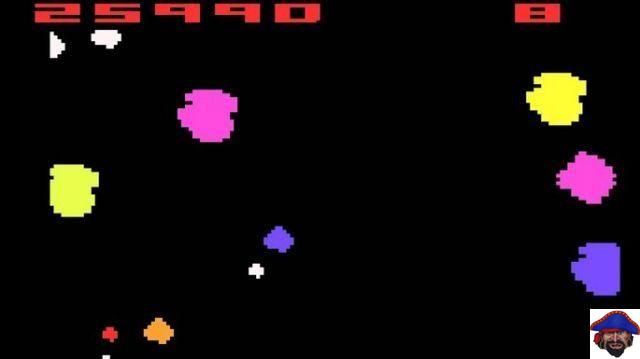 Another extremely successful spaceship game, Asteroids put you in control of a spaceship that needed to destroy asteroids that were coming from all sides. Upon destroying one, it fell apart into smaller pieces that also needed to be destroyed or avoided. 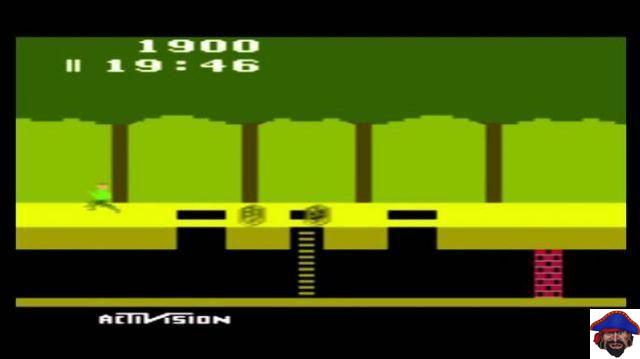 Maybe you don't think about Pitfall! as one of Atari's most famous games, but it was the second best-selling game in the console's history, second only to Pac-Man. The game was a platform adventure, and you had to collect treasures in a forest within 20 minutes. For that, you needed to avoid all kinds of obstacles, whether it was climbing, jumping, hanging from ropes, etc. 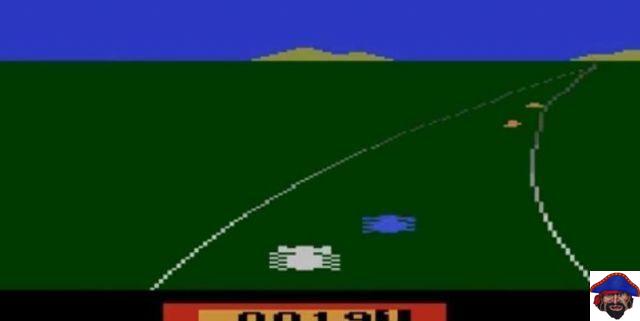 Enduro was a racing game where your objective was to overtake a specific number of cars per day within the game. There was no finish line, so to move to the next stage you had to beat the next stage's goal. The game had some very innovative mechanics for the time, such as a day and night cycle that affected the visibility of the route, in addition to a climate that also varied, which could affect the control of the car on snowy days, for example. 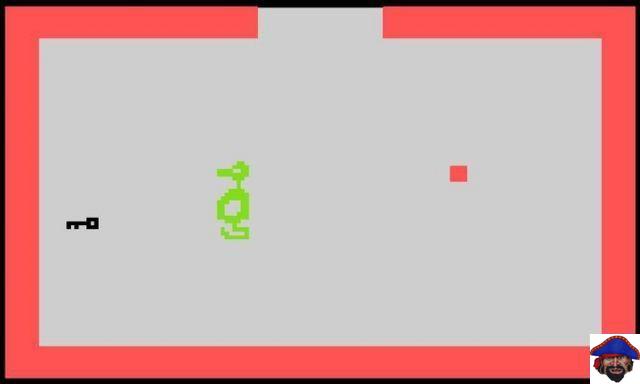 Adventure was an adventure game (as you may have suspected) with extremely minimalist graphics. It was a much worse 8-bit Zeldinha kind of thing and required us to use our imagination to complete the scenario. Here, his character was represented by a square and his sword was an arrow. The objective was to retrieve a chalice and return it to a castle, defeating dragons and using items along the way. The game also featured the first easter egg in video game history. 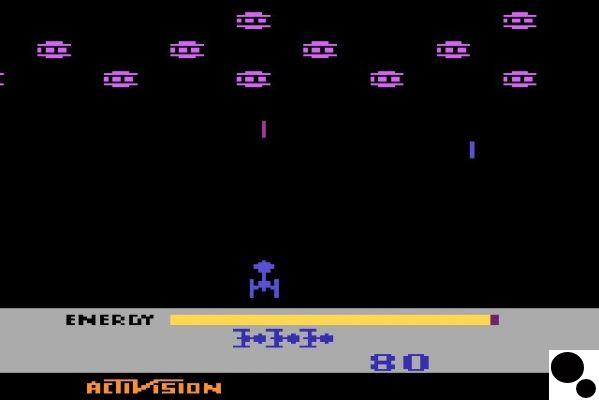 Megamania was a game extremely similar to Space Invaders. With a fixed screen, you controlled a little spaceship that had to destroy waves and waves of strange objects like hamburgers, irons and even bow ties. Despite having few stages, whenever you had to repeat one, it became more difficult and objects became much faster. 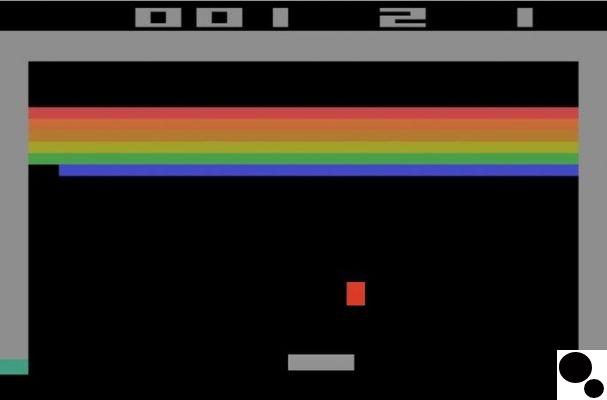 Breakout was the first game of the "breakout-game" or "block-breaking" genre. Here you controlled a bar with the objective of hitting a ball until it destroyed all the blocks above. A very outdated concept these days, but that's where it all started. 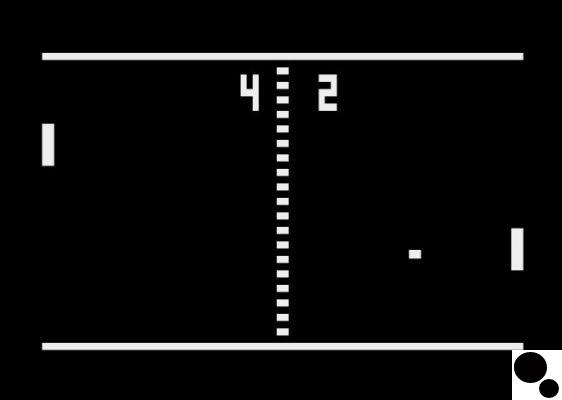 One of the simplest games ever invented, but also one of the most fun (maybe even today). Pong was the first profitable video game IN HISTORY and allowed up to 2 players to compete in a virtual table tennis. An elder of video games. 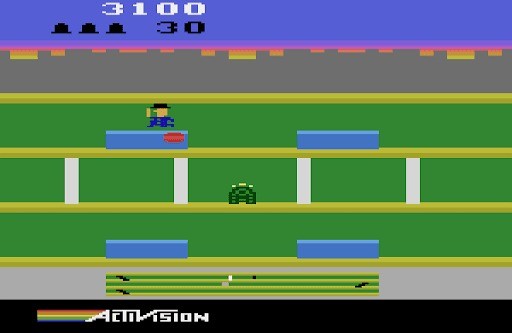 Keystone Kapers was a platform game in which you controlled a policeman chasing a thief inside a store. The scenery was 8 times bigger than it appeared on the screen, so you had to run to a corner to access a new part. During the chase, you had to dodge obstacles, take elevators, go up and down stairs, and everything else you needed to reach the thief. 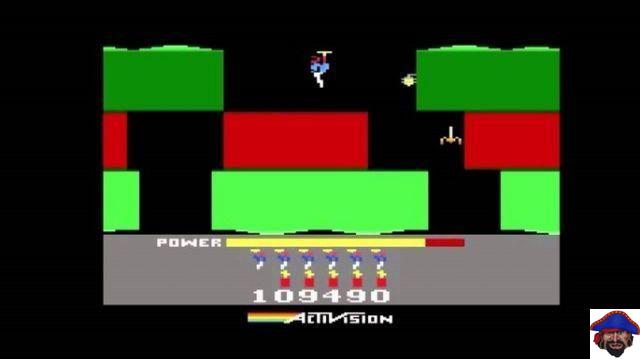 HERO was one of the most beautiful games in terms of graphics on Atari. The game was a platform adventure and put you in the role of a hero who had to rescue survivors. Despite the limitation of Atari's controls, the game had several mechanics and allowed you to use a jetpack and a laser beam, in addition to the movement controls, of course. 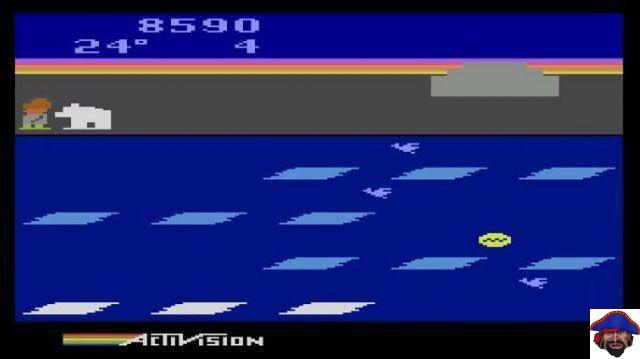 In Frostbite you controlled an Eskimo who had to keep jumping on ice sheets while dodging animals. The more time you spent jumping and dodging enemies, an igloo would slowly form at the top of the screen. Once the shelter was ready, you could go to it to pass the level, but first you had to run away from a polar bear. 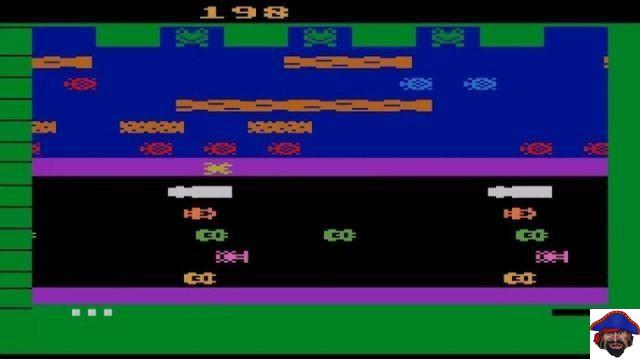 Frogger was one of the first games that would later serve as a model for many others. In it you controlled small frogs with the sole objective of crossing the street. For that, you had to avoid cars that were traveling on the track at different speeds, as well as jumping on boards and turtles to cross a river. The game only had a few different stages, but the goal was always to get to the other side with 5 frogs. 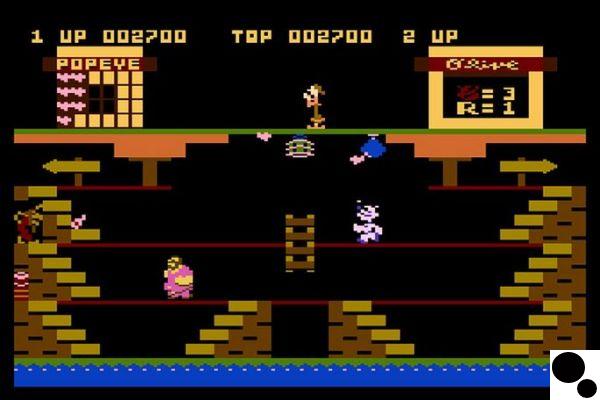 The first game of the famous sailor Popeye. Your objective was to collect various items thrown by Olivia Toothpick while avoiding Brutus' attacks. Unlike most Atari games, in Popeye it was not possible to jump, and the only command besides movement was a punch. Of course, it was also possible to eat spinach to get stronger. 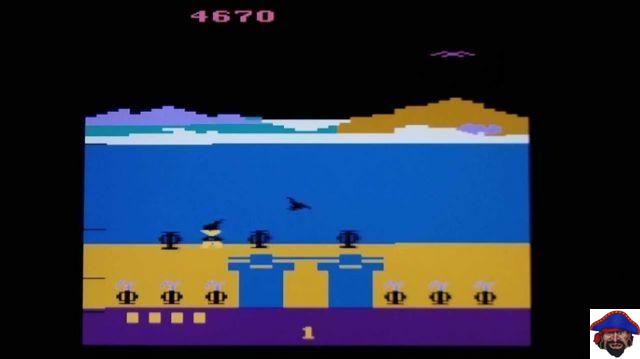 Boby is Going Home was another blockbuster Atari title. To pass the level, it was only necessary to take Boby to his house. On the way, of course, it was necessary to avoid all kinds of obstacles. The game also had one of Atari's most detailed graphics. 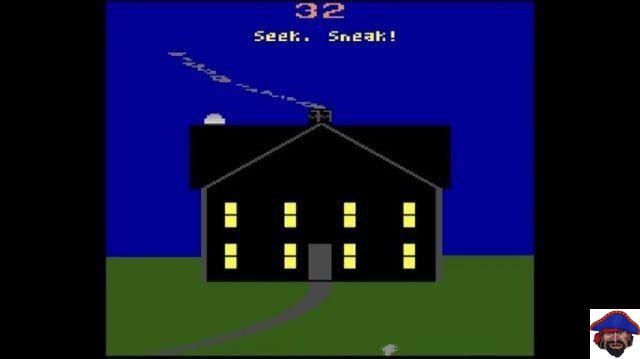 Sneak'N Peek offered a great hide and seek experience on Atari. Here, one of the players could take their time to hide (as long as the other player wasn't looking), at various points in the house or even outside it. After that, the other player was responsible for finding him. Very simple, but also very innovative for the time. 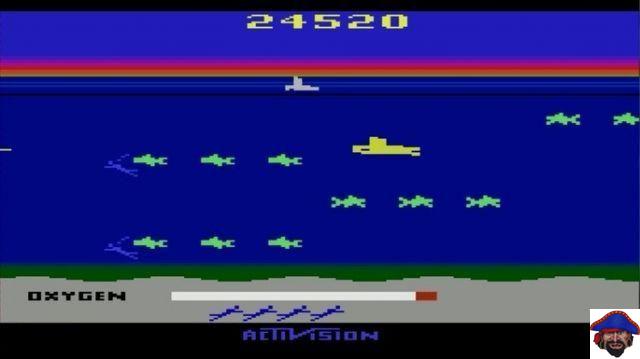 Seaquest put you in control of a submarine with the objective of rescuing people at the bottom of the sea. For that, you had to destroy the aquatic beings that attacked you at the same time you had to manage your oxygen. Whenever you were about to run out of air, it was necessary to go to the surface and retrieve the oxygen bar. 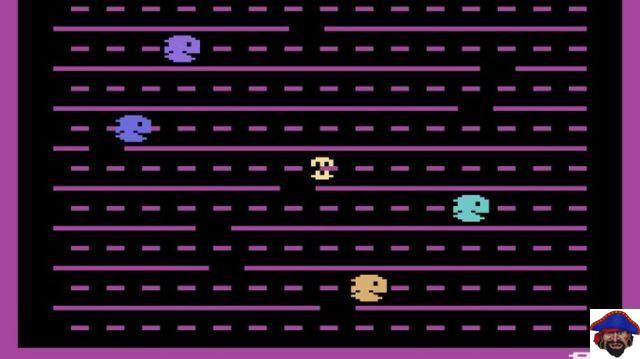 Jawbreaker was a kind of clone of Pac-Man very successful in the 80s. The game was a little more limited since most of the time you only moved to the sides, but the idea was exactly the same as the famous "Come-Come": collect points while trying to run away from little ghosts.

add a comment of The 20 best Atari games for those who are just nostalgia!