The 12 best superhero games on all platforms

Every real superhero fan needs to play a superhero game at least once in their life. And there are a lot of good titles across all generations of consoles and for PC. We've compiled the best of the best, either for you to remember or to play today! Check out! 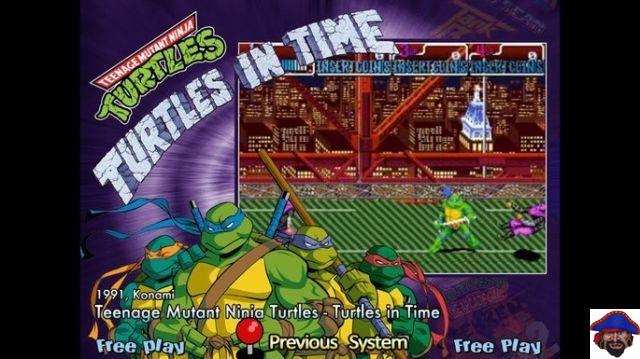 The game is undoubtedly one of the greatest classics in the world of Arcades. The title's 10 stages were a mix of hack n' slash with Street Fighter II, with a 2D and 3D environment at the same time. In other words: it was perfect for the most diverse types of players of the 90s.

The premise was that the 4 most famous mutant turtles in the world had been lost in time, and to return home they needed to defeat a series of enemies in each of the scenarios. The gameplay was focused on fighting, and it was a lot of fun to be able to choose between the different fighting styles of the characters. 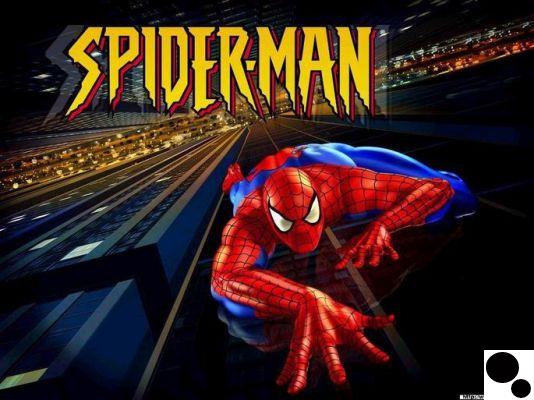 Anyone who owned a PS1 was very happy if they were able to play this game. The game was developed with Tony Hawk's Pro Skater engine, which in itself made the title very well received. Also, the gameplay was great compared to previous superhero games, which made this a classic game in the genre.

In addition to Spider-Man and his infinite skins, we had the presence of allies and villains from the Spider-Man universe. Venom, Daredevil, Captain America and Punisher are some famous player allies. And the list of villains is even longer, including Octopus, Mysterio, Carnage and Lizard.

The game alone was worth it just for the constant references to the comics, not to mention its dozens of missions, including the main and secondary ones. 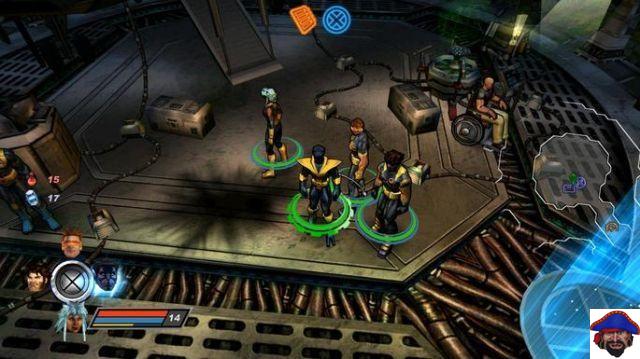 X-Men was a pleasant surprise for fans of Marvel's mutants, as it wasn't included in any of the House of Ideas narratives. You controlled Alison Crestmere, a character with geothermal powers, who controlled volcanic activity and caused earthquakes.

Of course, you will find several characters from the X-Men universe, especially those trained by Professor Xavier. By the way, there are 15 characters that you can team up with, and all of them can evolve their skills and powers. By the way, this is a high quality RPG that should be played by all superhero fans. 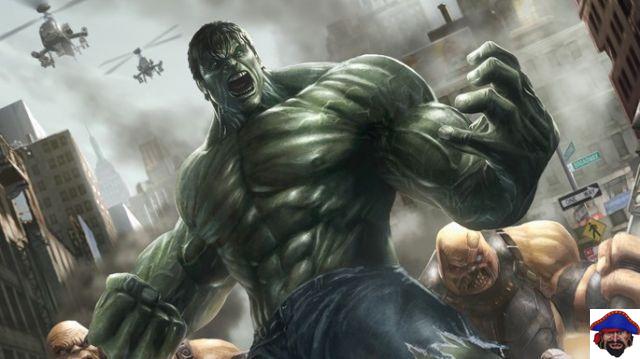 For example: when not engaged in a mission you could destroy cars and buildings as much as you wanted, in the best Hulk smash style. The Emerald Giant had 5 destructive attacks and a lot of rage in his heart.

The narrative was even interesting, based on the comics, but the really cool thing was to go around distributing blows to everything and everyone. 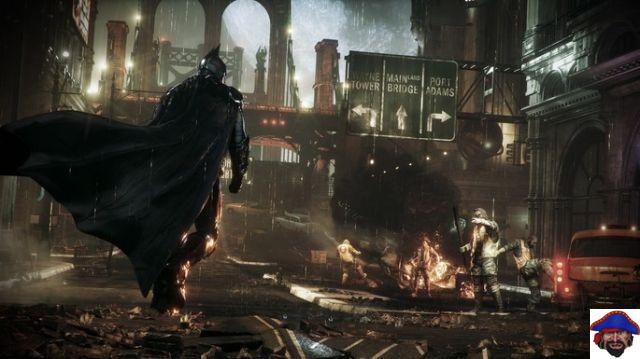 No one denies that the Arkham franchise revolutionized the history of superhero games. The deep narrative involving Batman, his allies and his enemies is simply unforgettable. Continuing with each game made the experience even more interesting, especially with the evolution of the Dark Knight in terms of combat and accessories.

Anyone who had the opportunity to play all the titles in the franchise was certainly surprised by the ending. Joker is impeccable, Riddler challenging and Batman with features that are the envy of any other DC hero.

And if you like the open world, Gotham is a full plate! The map grew so much until the last game that the Batmobile was needed to move around the city. Anyway: it's a super game! 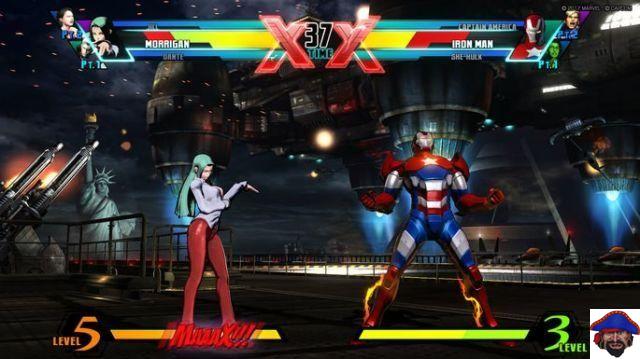 At least once in their lives everyone needs to play one of Marvel's crossovers with Capcom. And if you can if Ultimate Marvel vs. Capcom 3, even better! There are 48 playables in this version, including Nemesis and Jill Valentine from The Resident Evil.

The gameplay is fantastic, where you choose 3 characters and your opponent as well. You can switch between them in the middle of the fight, winning whoever defeats all the opponent's fighters. Each fighter has their own unique powers and combos, which makes each match unique.


There are several game modes, including Arcade, which pits the player against a series of enemies until reaching the Final Boss, Galactus. But if you prefer to play with friends, versus is another good option! 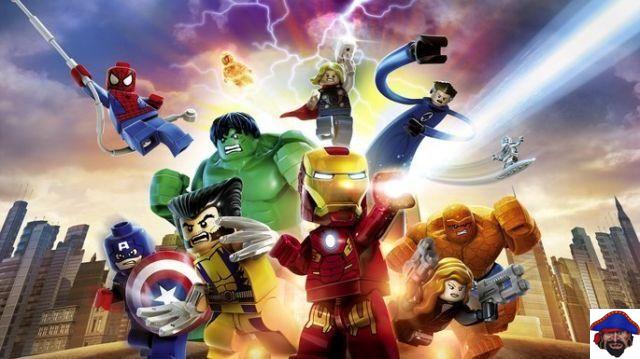 LEGO games all have the same base, with a very intuitive and easy to master gameplay. In this case, you can control up to 130 Marvel characters in missions full of personality and puzzles to solve. Even the late master Stan Lee appears in the adventures of these heroes.

New York and Asgard have been completely portrayed in LEGO bricks, and the voice acting of actors from the Marvel Cinematic Universe films is another strong point. Galactus is the main antagonist of the game, and each mission tells a piece of the narrative that leads to the final battle against him.

If you're one of those people who likes to completely beat a game, you'll have a challenge in this one, because it's really hard to unlock all the characters! 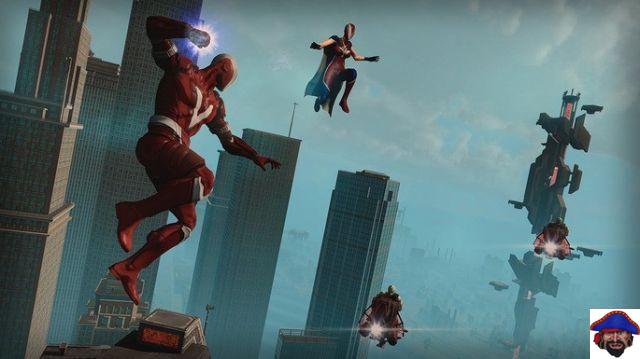 One of the most controversial hero games ever as it puts the player in control of the President of the United States. The fourth adventure of the franchise brings the clash between this super politician and a fierce and unprecedented alien threat.

It's a third-person game, with shooter elements and set in an open world. You must roam the streets of a dystopian city, which is very reminiscent of Washington DC

As for character powers, you can do just about anything. From jumping off buildings, flying, using mind power and releasing fireballs or ice balls at enemies. Super speed, super strength, and the ability to cause earthquakes are other very useful abilities.

For those who like RPG elements, the title has a skill tree, which can be completed as you progress through the missions. 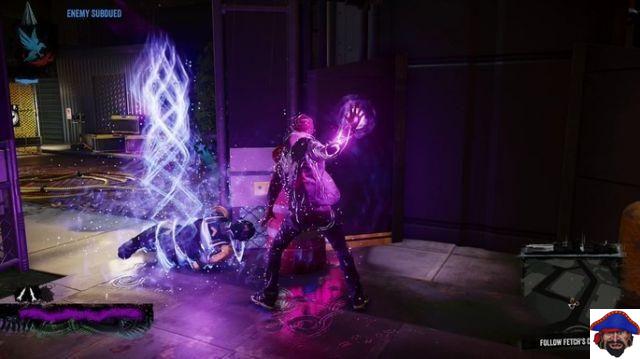 This Sony exclusive features a 24-year-old who receives the ability to absorb the powers of others. The player can turn into smoke and pass through pipes and other openings, as well as slow down time. This character carries a chain, used to attack his opponents.

The game is open world and resembles, in a way, Saints Row, for its political tone. The main character is a young graffiti artist who fights against the government and the threats of capitalism.

One of the coolest things about game mechanics is the character's parkour ability, which can be facilitated by controlling some natural elements that appear in the environments. 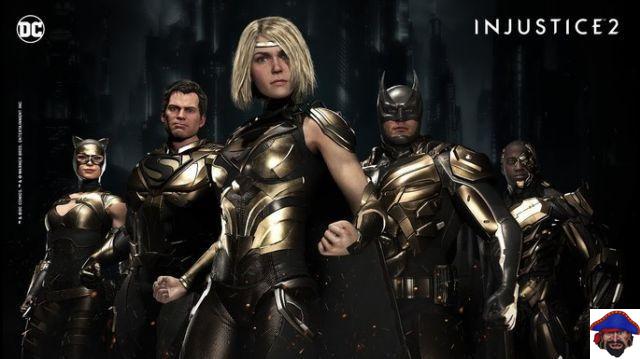 Injustice 2 we all already know. It's a fighting game made up of DC heroes and villains. Each fighter has his signature moves, which makes each fight unique and worthy of the best moments in the comics.

This title has evolved and improved on some of the most successful elements of Injustice: Gods Among Us, making it one of the best fighting games ever made. Mainly because of the deep interaction with the scenario and the fact that we can customize the look of the characters. 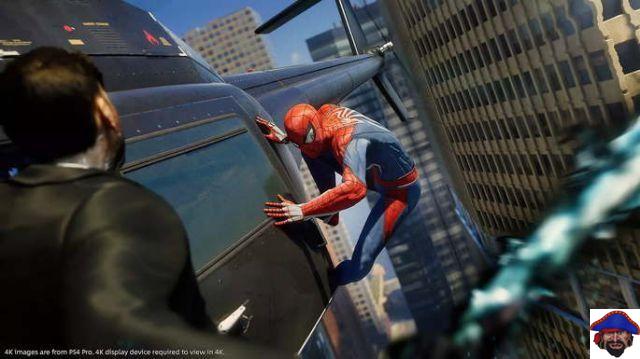 This is considered today the best superhero game ever made. The graphics are drooling and jaw-dropping, with an entire New York at your feet to explore. The open world is huge, the amount of missions is absurd and you can spend months venturing into the Spider-Man universe if you want.

The game excites in everything, but mainly in the references to other Marvel characters. Apart from that you can have several versions of Teioso, with clothes from practically every movie and from various times in the comics. Even the one used by the cult Tobey Maguire in the first Spider trilogy.

In terms of game mechanics, there is nothing to criticize. The strikes are fluid, fast and allow a mixture of Spider Sense, webs, punches and kicks of the most varied styles. All in all, it's an essential game for any Spider-Man fan and any superhero fan. 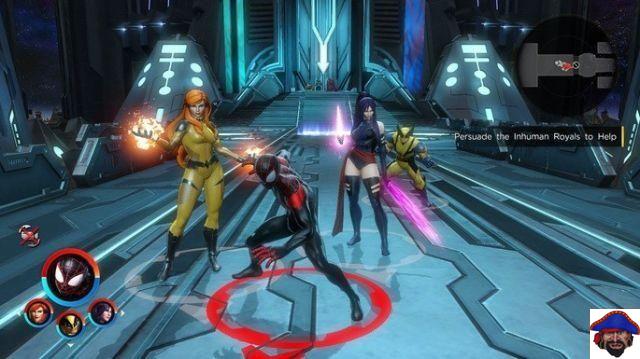 Surprisingly this game was only released for Nintendo Switch. In it you and up to 3 other players choose a Marvel hero and advance through linear stages, while defeating enemies and Bosses. You have several types of physical and elemental attacks, as well as a special one, which can be used in conjunction with the other companions.

In narrative terms, the game follows Thanos' quest for the Infinity Gauntlet. His mission, of course, is to stop him at any cost, with the Mad Titan being his ultimate enemy.

It's a game that doesn't surprise so much for its mechanics, as it hasn't brought much evolution in relation to previous games in the series. However, it brings a narrative very close to what Marvel has been telling in the movies, in addition to being a lot of fun to play with several friends on Switch.

Audio Video The 12 best superhero games on all platforms
The 12 best VR games for Android! ❯