Everyone knows the amount of content present in Minecraft. Even after many (MANY) hours of play, it is always possible to find unknown mechanics and items and, often, we don't even know what they are for. Some can be drops from rare monsters, others only appear under specific circumstances, others seem to be of no use at all. Anyway, check below 10 super rare items in Minecraft and how to get them! 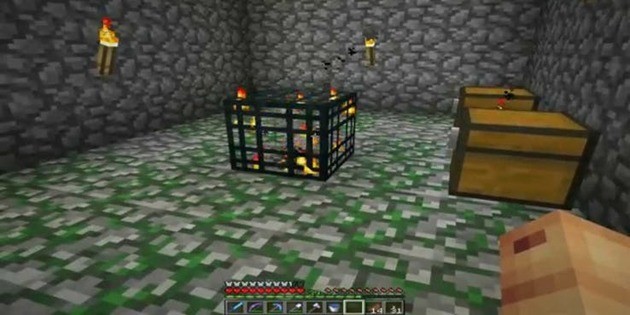 Have you ever thought about having an infinite supply of skeletons, zombies and other monsters for you to farm the drops you want? That's what the Monster Spawner does. The item has the appearance of a cage and can be found from time to time during mining.

The dungeons where the Monster Spawn is usually found are dark and dangerous to enter, but once you've cleared the place and lit it with torches, you can easily adopt it as your own. Unfortunately, Monster Spawners cannot be collected for the inventory, meaning any farming room you want should be exactly where you found the item.

2. Pearls of the End 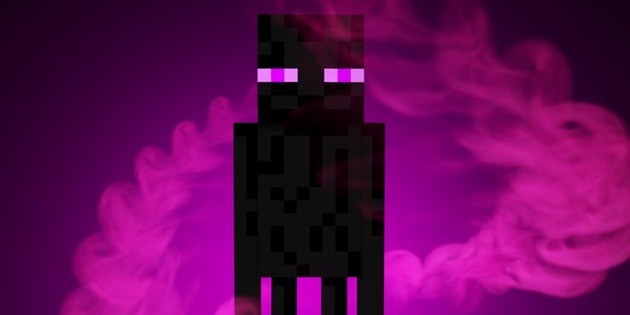 Pearls of the End are dropped by the Enderman (satire of the Slenderman), a shadowy creature that appears at night to steal blocks. Unlike other Minecraft creatures like skeletons and zombies, the Enderman is a relatively rare creature that will only show up to you once in a while. Also, the monster teleports everywhere once you find it.

A good tip for fighting the Enderman is to equip a pumpkin on its head, which causes the creature to stop attacking until you attack first. By collecting the Ender Pearls, you will be able to throw them to teleport to the point where they landed. This can make your wanderings a lot more fun. 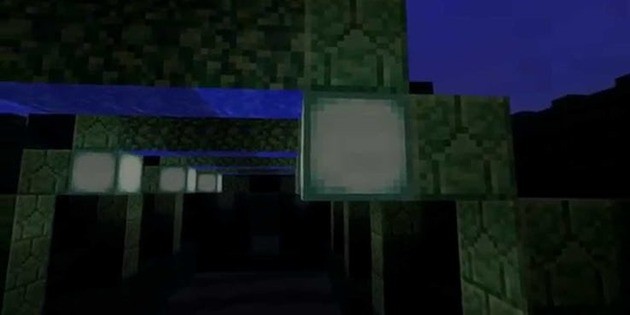 Sea Lanterns are glowing blocks that emit a light of 15, capable of helping you a lot when exploring castles, dungeons or any dark location. To find them, it is necessary to hold your breath and explore underwater monuments and ruins, since Sea Lanterns are only generated in these places to serve as lighting.

Because they are found in few situations, whenever you get the chance, collect as many Sea Lanterns as possible. 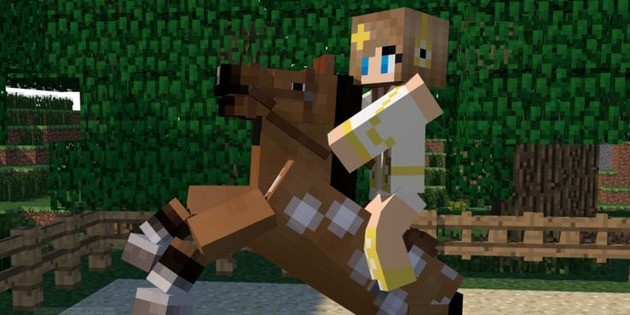 Roaming around the world of Minecraft is much more fun on top of a mount. However, this is only possible if you use a Saddle. This item allows you to ride and control a horse, donkey, mule and even a pig. Without the saddle you can ride the creatures but they will move on their own.

Saddles cannot be crafted and can only be found in chests inside strongholds, temple villages, End City and Nether Fortress. Although the range of places is wide, the percentage of a chest that drops a Saddle is quite low. 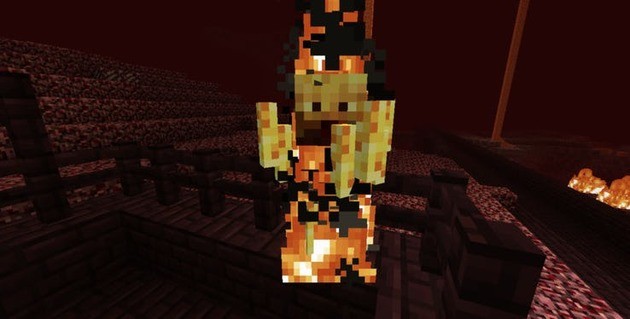 Glowing Sticks are essential items for alchemy in Minecraft as they are used in crafting Potions Support. However, the item is not found in the Overworld (scenario where you spawn), but only in the Nether dimension.

To get to the Nether dimension, you need to collect enough obsidian (which can only be mined with a diamond pickaxe) to assemble a frame (4 wide and 5 tall minimum) and activate it with fire inside. This will form the Nether Portal structure, which allows you to travel between worlds. Once in the Nether, just defeat a mob called Blaze, who will then drop the Glowing Rod. 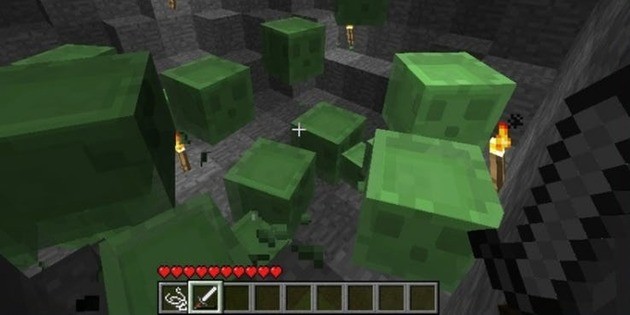 Slime Slime is the kind of item you don't miss at all, but when you have it in your inventory, it opens up a world of possibilities. To get Slime Slime you need to find some swamp biome and kill mobs called Slime. These creatures multiply into smaller versions when you attack them, so be careful. Upon defeating them, the Slime Slime item will be dropped.

Slime Slime's greatest utility is that it serves in the crafting of the Sticky Piston item, which has the ability to push most blocks and help control your world. 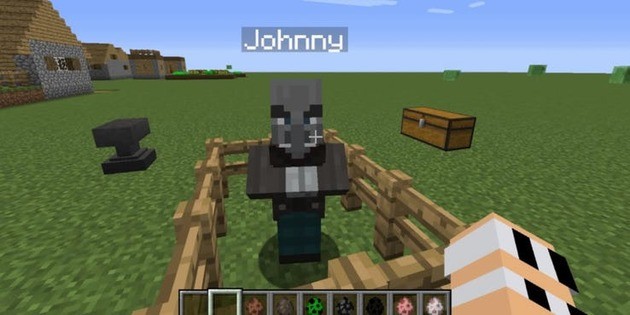 Have you ever thought about naming your animals, items and weapons with whatever name you want? Tags may not be any fun for new players who want to worry about more useful gear and items. However, the item is well liked by more experienced players who want to label their stuff and finally name their pig Zezin and their sword Bread Knife or something like that.

Tags cannot be crafted and can only be obtained from chests in dungeons, fishing or trading with villagers. 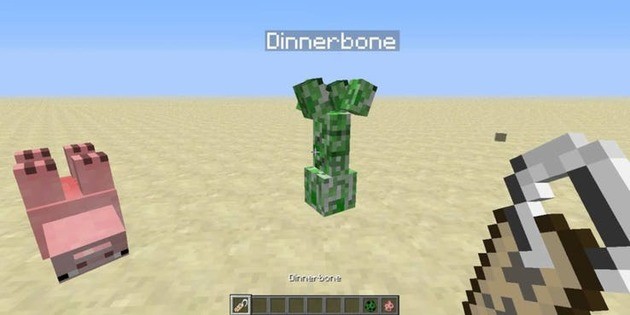 Speaking of Tags, know that they can provide two hilarious and very random easter eggs. One of them is the Sheep “Jeb” (nickname of one of the Minecraft developers), which occurs when you use a Tag named “jeb_,” and place it on a sheep. As you do this, the sheep's wool will alternate between the colors of the rainbow over and over again.

The second easter egg happens when you use a Tag tagged “Dinnerbone” or “Grumm” and place it on any animal, which will then be upside down. 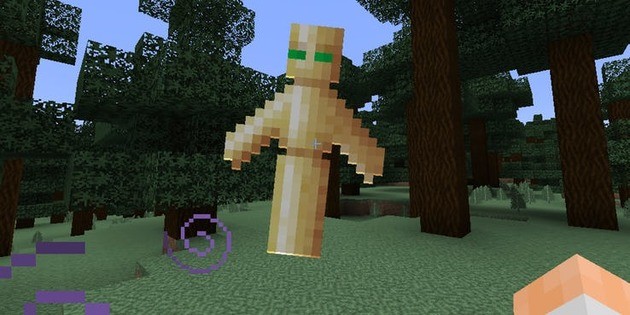 The Totem of Immortality is able to prevent the death of a player who has the item equipped in one of their hands. If the player takes fatal damage, they will have 1 HP instead of dying. Additionally, the item can remove effects and provide Regeneration II for 40 seconds and Absorption II for 5 seconds.

To obtain the Totem of Immortality you need to venture into the Forest Mansions that spawn randomly in the worlds. There you can find a mob called Summoner that, when defeated, drops the Totem. 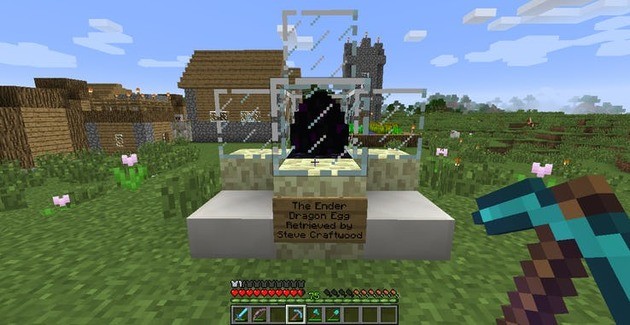 The Dragon Egg is one of the rarest items in the game as only one is spawned per world. To find it, the player needs to defeat an Ender Dragon. However, the Egg cannot be collected or mined, other than teleporting when you click on it. To get it, you need to stop him from teleporting using one of these tactics:

Remembering that the Dragon Egg is a purely cosmetic item that works as a kind of trophy.

Check out the guide on how to use enchantments in Minecraft!

Audio Video See 10 rare Minecraft items and how to get them!
See how to make a Shield in Minecraft and how to customize it! ❯

add a comment of See 10 rare Minecraft items and how to get them!