Roblox has millions of free games available. And you can be one of the creators of these games! Doing this, however, is quite a lot of work and requires some practice in the Roblox Studio tool. In this article we will explain how to use it, so that you can create the most varied types of games.

Roblox Studio is the only tool you can use to create a game on Roblox. That's why you can't create a game or even a map on your phone or tablet, as the Studio app is only available for computers, both Windows, Linux and Mac.

With that understood, head over to the main Roblox site. Registration is very quick and asks for nothing but birth date, login and password. It's fast and intuitive! Once the account is made, you will be able to access the games already created by you, as well as the games created by your friends or by other players.

You can now download Studio from the creation section of Roblox. Just click "Create", next to "Avatar Store", in the top menu, as you can see in the image above. Installation takes no more than a few minutes.

Once it is properly installed, we can move on to the next step! The next step will depend on your goal when creating a game and your level of experience using Roblox Studio. So you will see below:

Step 2: Creating the Game with Studio

Our tutorial is based on 3 types of game creators:

Those who don't have a lot of experience creating games and who don't know much about programming and coding should opt for the gameplay model. It is the fastest and easiest way, as the rules of the game are already established. In this case, there are only 7 models that the game offers.

Let's say you've chosen "Obby", which is a platform game: going from one place to another. All you have to do is add or change visual elements, such as objects or the avatar. The gameplay is already there, so you won't have to create a lot of stuff. It's to leave the game "more to your face" and that's it! 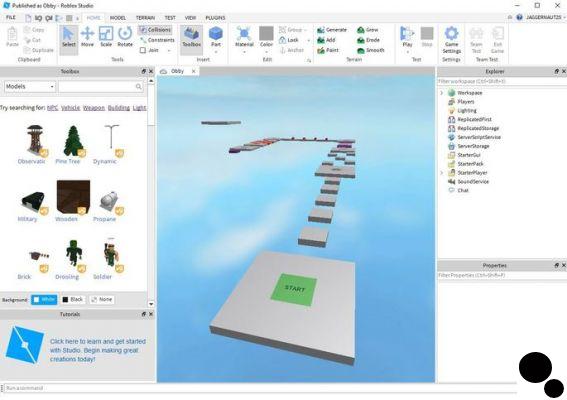 In the example above I could make some adjustments. Example: changing the colors of the bases, changing the day to night and even, if possible, changing the duration of the game. The options in Roblox Studio are many, so try to stay calm and explore little by little.

The themed base allows you to start with a ready-made terrain base. There are several themes available, like a medieval one, where you start crafting from a castle with a village. The advantage of this choice is that you spend less time making the foundations of the game. Also, you can find a theme that fits the gameplay you want to do.

Below we create a map based on the "Castle" theme and place our avatar to walk around it. As you can see, it already has several objects and constructions ready. Including the avatar itself. But if you want, you can delete all or some that you don't think are worth keeping. And, of course, it can change the appearance of your character and NPCs. 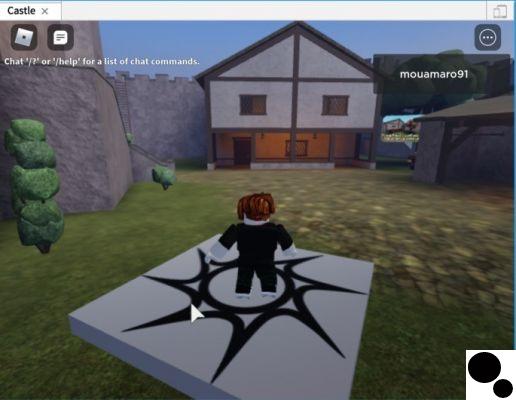 But here the mechanics of the gameplay are not defined. That is: you need a knowledge of programming and code as well. That way you will be able to create the game itself, not just the map, as it will have its own rules system.

Creating a game from scratch is the hardest, but it can be the most fun as you have 100% creative freedom. For this, we are going to use the baseplate map. This template is a "blank canvas". You already have the sky ready, but you have to build all the terrain, going through the objects, NPCs, etc.


In the image below you can see that there is really nothing on the map: 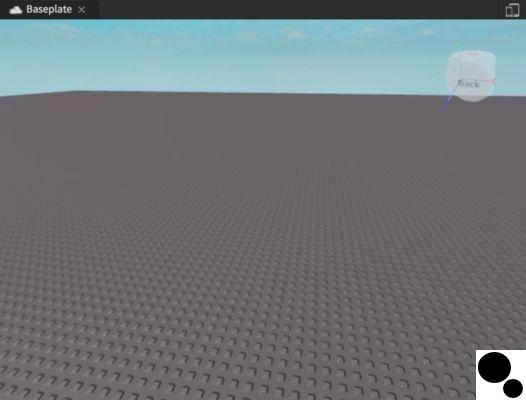 From there, the first step is to create the terrain. The terrain can be of the most varied elements. We can use wood, basalt, ice, stone, sand, water, plastic and even lava. It takes a while to find all the tools. In the terrain editor, you can select a few basic elements to generate at once: 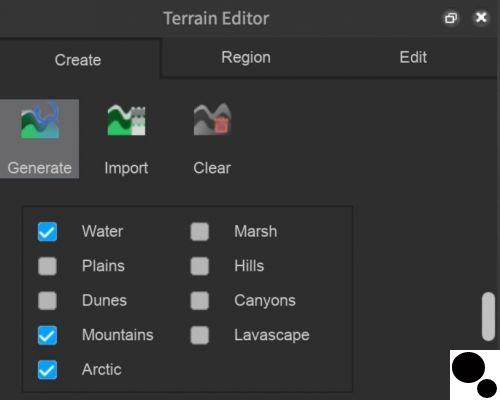 In this case, we chose to generate an arctic map. 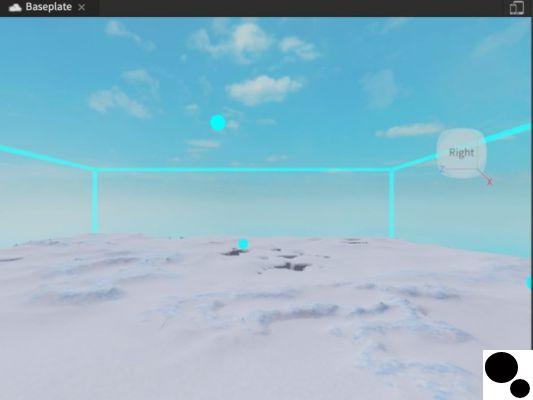 Once the terrain is created, you will start adding all the other elements:

We won't go into detail on these aspects to keep this tutorial simple. However, you will have to carefully and carefully explore the "Model" tab. This is where you'll create avatars, for example, and you'll be able to define the behavior of all the game's elements. By the way, if you created an avatar in another type of creation program, you can export it to Studio!

Once you've created all the game elements, you'll establish the gameplay mechanics. Game start, game end, rules, etc. At this point you will need to have some programming and coding knowledge, especially HTML.

This step is super important. With each change in the game's edition, you can test to see how it is doing. It's nice to check if the NPC's are doing what you want them to do or if the behavior of the whole world is as expected.

To do this, go to "Test" in the top menu and click on the "Play" symbol. Now you will be able to move around the game world freely, using the movement arrows on the keyboard. It can interact with objects that you have set to be interactive, for example, confirm that you can enter buildings or that you forgot to add anything to the map.

Step 4: Publishing a Game on Roblox

When you're sure your game is ready to play, it's time to publish it. To do this, just click "Publish to Roblox" in the top "File" menu: 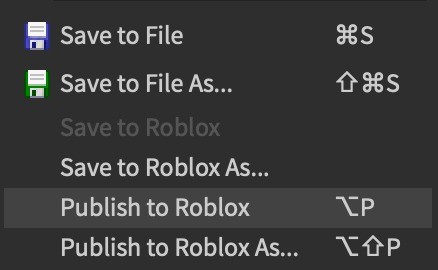 On the next screen you will have to define the game's genre, whether it will be public or private, name and the devices on which it will be available. Once you've determined all these options, just click "Create" to bring your game online!

Is creating map and game in Roblox the same thing?

No. You can use Roblox Studio to create maps and edit maps you've already created, but creating a game is different. The map is part of the creation of a game, being the first stage of it. After that, you will have to define the gameplay rules, how many players can participate, etc. All through the Studio tool.

When you create a map from scratch, for example, you need to choose whether that map is playable. If he's playable, we have a game. If it's just thematic, we'll only have a map where other players can be, visit, walk and even interact. However, there is no rules and objective component of a game.

Audio Video Roblox: How to create a game in Roblox Studio!
Roblox: All Promo Codes to redeem! ❯

add a comment of Roblox: How to create a game in Roblox Studio!