There's only one way to capture a Ditto: finding it in the wild. It turns out that it will never appear in its original form, that is, it will always be disguised as another pokemon. To find him, you must know what the possible disguises are.

The table above shows all the Pokemon that Ditto can transform into. So whenever you encounter any of these creatures, just don't let them pass. Your best chance of finding a Ditto is to capture them all whenever possible. On the other hand, this list is also for you not to create hopes that you have found it by capturing a pokémon not mentioned above.

From time to time, Ditto's list of disguises changes slightly (usually when new Pokemon are released).

If you catch one of the above pokemons and it is a Ditto, the reveal will be done as soon as the capture is complete. 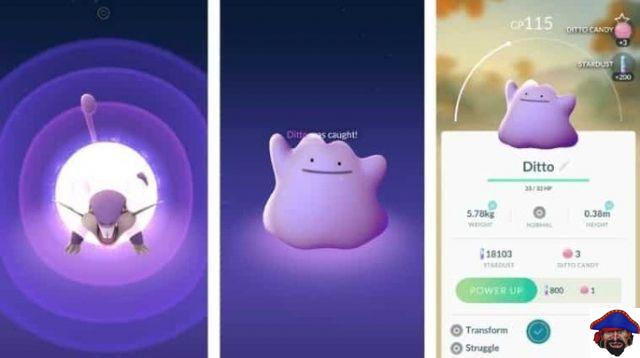 It's worth mentioning that no pre-existing Ditto in your inventory will serve to complete the "Capture a Ditto" task from the "Let's Go Meltan! (3/9)" research. It will only complete if you capture a Ditto while you have the mission open, that is, when you reach step 3/9.

Information about Ditto in Pokémon GO