Pokemon GO: How to make every Eevee evolution in 2022

Sylveon, Espeon, Umbreon, Vaporeon, Flareon, Joelton, Glaceon and Leafeon. Undoubtedly Eevee is the pokémon with the most evolution options in Pokémon GO and here you'll learn how to get all of them! Start by learning a little trick to win one of each of these pokémons in a totally guaranteed way, and then the requirements for each of these evolutions. Check out!

Change Eevee's names to evolve it! 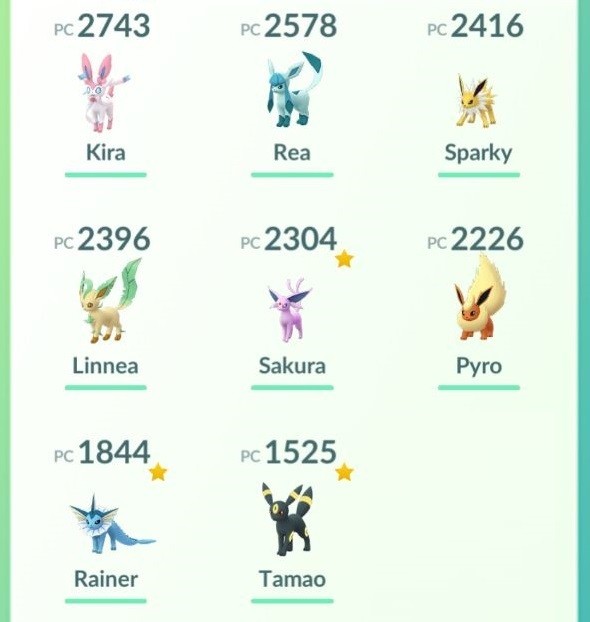 As a rule, you only need to collect 25 Eevee Candies to evolve it into Vaporeon, Jolteon e Flareon. However, as this evolution is random, you can never know which one you will get. In this sense, some players have discovered that they can interfere with Eevee's evolution by simply changing its name.

But not just any name! You may remember that in the first season of Pokémon, in the Indigo League, Ash meets the Eevee Trainer Brothers. Almost secretly the creators of GO paid homage to them. So the names should be:

Watch out for some details here. The first one is that this tactic only works ONCE with each type of Pokémon. In other words: if you used the tactic to have a Jolteon, you can't use it again to have the same Pokémon, and that goes for all Eevee evolutions.

Another thing: restart the game when you change the Eevee's name. It could be that the server goes down or has some kind of problem, invalidating the rename. In most cases this method is an absolute success. For some players, however, it didn't work out too well. This is usually due to the fact that the name change was invalidated.

How to evolve Eevee into Sylveon

Sylveon has finally arrived in Pokémon GO! To get it, you need to put an Eevee as your companion and interact with it until you get the status "great companion". For that, you need to get 70 hearts (whether walking, feeding, taking pictures, battling, etc). After that, just pay the standard cost of 25 candies to evolve your Eevee into Sylveon.

How to evolve Eevee into Umbreon and Espeon

If you've already used the name trick and want to get more Espeons and Umbreons, just put Eevee as your companion and then walk 10 km with him (getting 2 Eevee Candies in the process). Then:

The mechanic was taken from games like Pokémon Silver where there is a special way to get Umbreon and Espeon by training Eevee at different times of the day. Remember that the cost of Candy remains the same!

How to Evolve Eevee into Glaceon and Leafeon

The most guaranteed way to have these two little monsters is using a special item, called the Lure Module, the famous "lure". It should be used at a PokéStop to attract certain types of pokémon. In the case of Glaceon and Leafeon, they need, respectively, the items Glacial Attract Module e Mossy Attract Module to be obtained. Again, the cost of Candy remains the same.

What is the best Eevee evolution?

Many players wonder what exactly is the best Eevee evolution in Pokémon GO. This answer can be a little complex, as we are talking about Pokémon of different types. So the ideal is to try to have one of each element:

Even so, it's important to know that some of these Pokemon are a little more relevant than others:

Audio Video Pokemon GO: How to make every Eevee evolution in 2022
Pokémon GO: Know the best attacks in the game ❯

add a comment of Pokemon GO: How to make every Eevee evolution in 2022