Even in the era of open world games, virtual reality and 4K, 2D games are still on the market and are still great options for lovers of the style and especially for those who don't have the best PC today. So, check out the 20 best 2D games for weak PC below!

Attention: Most of the games below require, on average, Pentium IV processors (or equivalent), 2GB of RAM and an outdated graphics card. In cases where these items are higher, the others will be lower. Some games also don't require a graphics card! 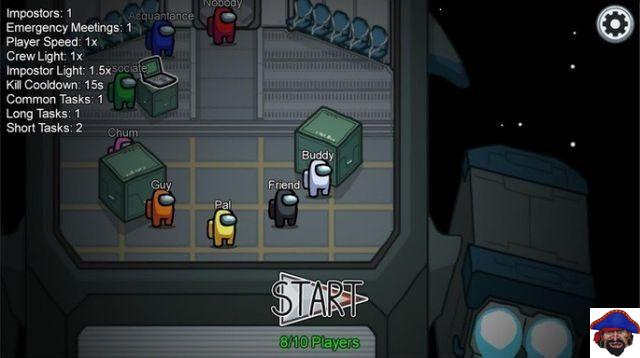 The great and absolute phenomenon of 2020. Among Us is an extremely simple, light and fun 2D game. The game is exclusively multiplayer focused and puts multiple players on a spaceship, one of them being an imposter who must assassinate everyone else. Over the course of each match, players must share their suspicions about who the villain is and vote for a player to be kicked off the ship. Meanwhile, the imposter must do his best to lie and hide his steps. 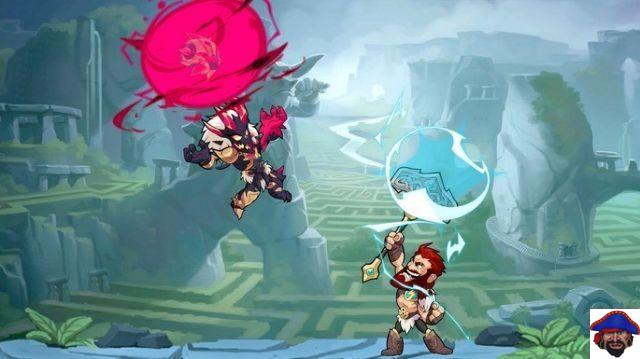 Brawhalla is one of the best fighting games you can play on your weak PC. Contrary to what its graphics suggest, Brawhalla is a complex game full of mechanics that take time to master. The game follows the same Super Smash Bros style in which there is no health bar and the objective is to throw the opponent out of the stage and prevent him from coming back.

Brawhalla has dozens of playable characters, most of them from the franchise, but it also has illustrious appearances from other famous characters such as Steven Universe, Rayman and even characters from The Walking Dead! 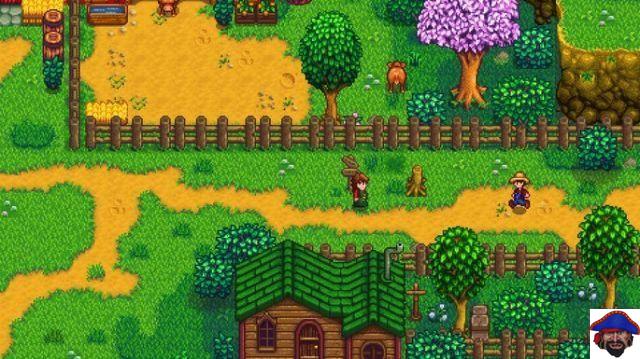 Undoubtedly one of the most recommended games on CaptainVideoGames. Stardew Valley is a farming and social relations RPG where you take on a farm inherited from your grandfather. The objective is to manage all the resources to make the business prosper while developing your relationships with the many NPCs in the village. The game has a charisma and fluid gameplay that is extremely difficult to replicate. Surprisingly addictive. 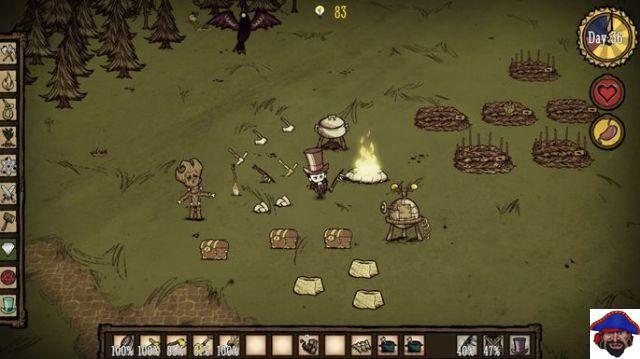 Don't Starve is one of the most successful survival games today. What catches the eye right away is the extremely captivating visual identity, with cartoonish and dark elements. Like most games of the genre, here we wake up on a desert island and we must gather resources and build tools to survive as long as possible. The biggest difference here is the complexity of the game and the relatively high level of difficulty, as there is no tutorial for anything and you should only learn from your failures.

Knights of Pen and Paper 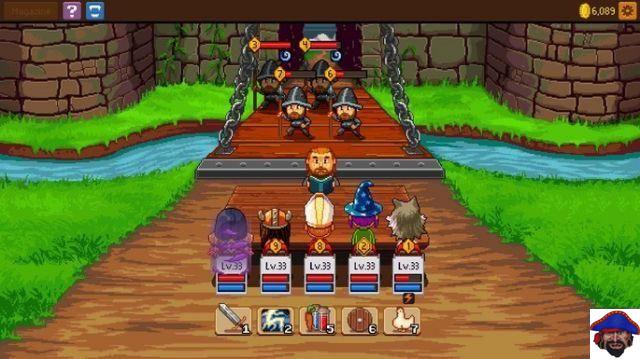 Knights of Pen and Paper is an RPG heavily inspired by the games of the 90s. With pixelated graphics and turn-based actions, the game offers a classic experience with everything you can expect from the genre, but in a very nostalgic and captivating way. 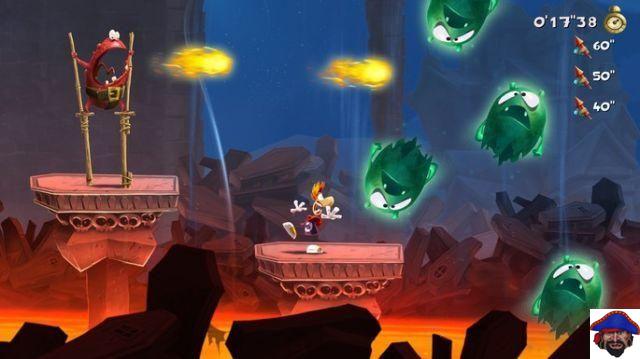 Rayman Legends is a 2.5D game, meaning most of the gameplay takes place in 2D, with a few moments taking place in three dimensions. As is already a trademark of the franchise, Rayman Legends is full of flashy visuals and extremely charismatic characters. Numerous levels, bosses, online challenges and a co-op mode for up to 4 players make Rayman Legends a must-play for any platform fan. 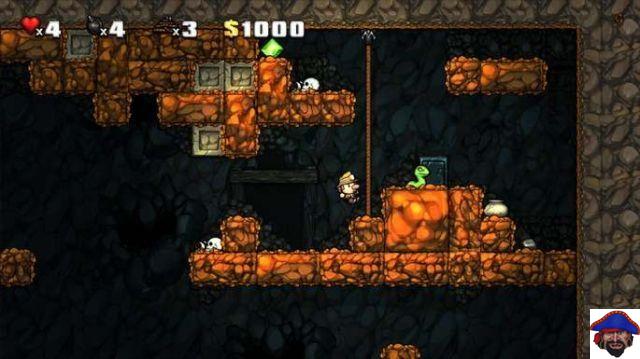 Spelunky is a 2D platform game where you have all the freedom not only to explore the landscape but also to destroy it completely. Each element on the screen can hide secrets and reveal new mechanics that you need to learn little by little to keep going. Along the way, you will die in countless ways until you understand how things work. The game has several unlockable characters, daily events and a co-op mode that allows up to 4 players to join the game. 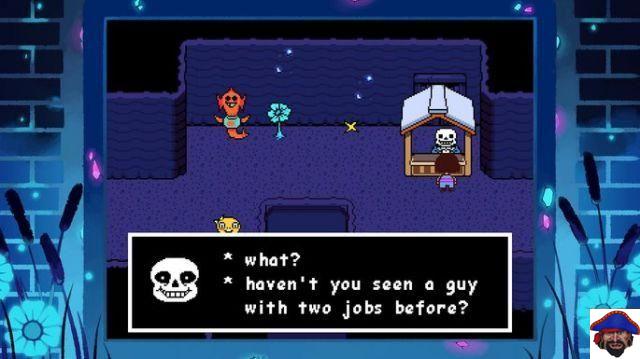 Undertale is an award-winning RPG that sets itself apart from the rest. With a very strong focus on narrative, the game offers a very high freedom of approach and allows you to advance in the story without having to fight anyone if you want. One of Undertale's differentials is the fact that it memorizes your decisions even after a game over, that is, your choices have consequences that you can't get rid of later. 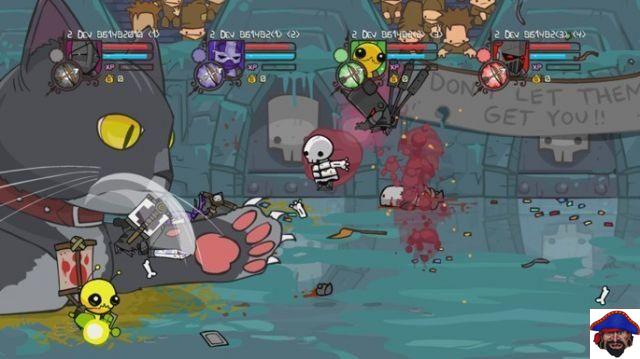 Castle Crashers is a game that mixes many elements: hack and slash, arcade, adventure, platform, action, etc. The gameplay resembles Cuphead and here we also have to go through the stages frantically defeating all the enemies that appear. With many characters to choose from, multiple modes to participate in, and the ability to play with friends cooperatively or competitively, Castle Crashers is one of the funniest and most “jolly” games on this list. 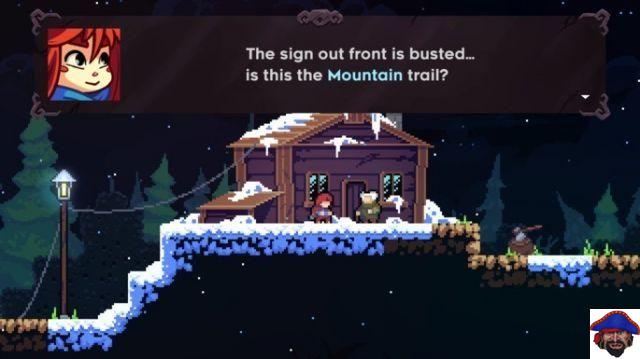 Celeste is a 2D platformer with pixelated graphics. The game has a proposal of self-discovery, focusing less on action and adventure and more on narrative and soundtrack. Even with very simple mechanics, the game presents good challenges and good content with more than 700 scenarios to overcome. It is also possible to unlock secret levels with much higher difficulty level. 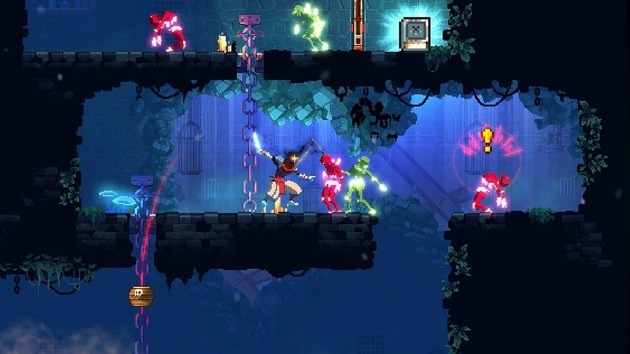 Dead Cells is a platform game in the Metroidvania genre (a mix of Metroid and Castlevania), which explains a lot. The game takes place inside a castle full of varied monsters. To deal with this, the player has access to swords, shields, daggers, grenades, traps, etc. In addition, the game has some RPG features, allowing you to improve weapons, equipment and skills. The combat mechanics are the strong point of the game, with fast and action-packed movements. 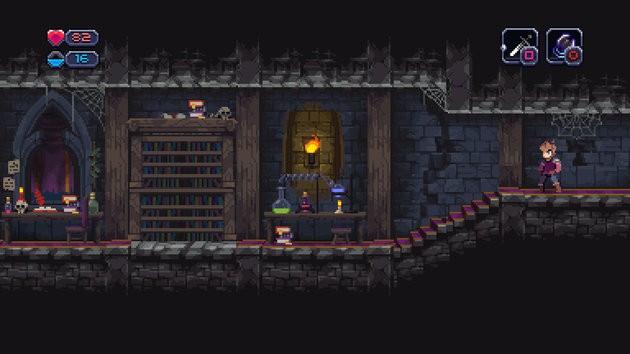 Another Metroidvania, Chasm is also a platform game that brings together RPG elements. The game's differential is that its maps are generated randomly whenever you play. So, after completing the game for the first time, don't expect that the second time will be the same. Maps are created by combining random game scenarios.

The RPG-style item system isn't the most obvious. Unlike looking for the strongest items, the player needs to choose items that give the necessary attributes for each situation, such as health, physical attack, magic attack, etc. 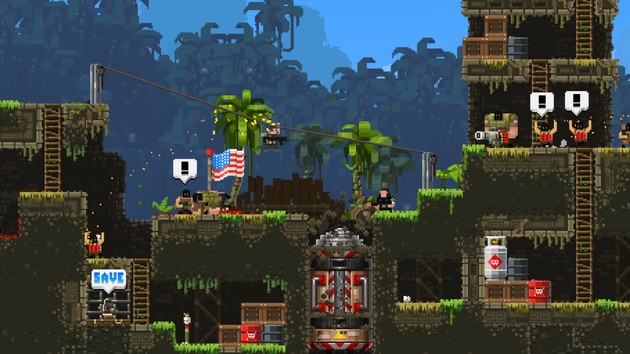 In true Contra style, Broforce is pure action from the start. The 16-bit graphics let you fully focus on the killing and the incessant gunfight. Here you control a team of soldiers with the most original names possible: Rambro, Brobocop, Bronan the Brobarian, Indiana Brones, Brommando, Bro Lee and many others.

In each level the only objective is to get to the helicopter. For that, you need to survive the army of terrorists, aliens and underworld creatures that will be in your way. All enemies will kill you with a single shot or hit, so you need to play carefully. 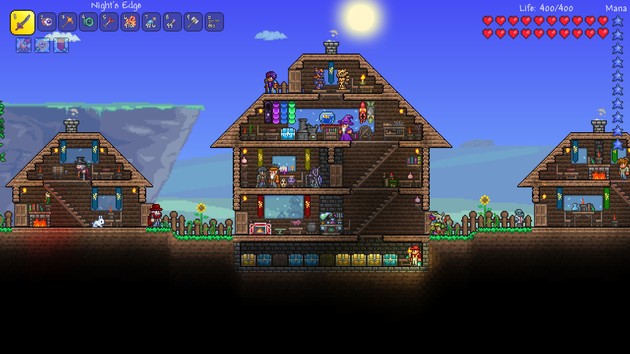 A good way to describe Terraria is: 2D platform Minecraft with a lot more things to kill and weapons to build. The game doesn't have a tutorial so players have to figure out on their own how to build things and, more importantly, which items can be built. Also, in Terraria, the entire setting can be destroyed to reveal secrets and gather material.

The game basically takes place in two scenarios, the surface and the underground. On the surface, the game follows a day/night cycle that brings different characteristics and enemies. Every moment of the day is conducive to a type of activity.

One of the graces of the game is to build your own village. As you expand and upgrade buildings, NPCs (non-player characters) appear to help with healing, item sales, and other services. But watch out! They only appear if you build rooms with enough space, furniture, and light. 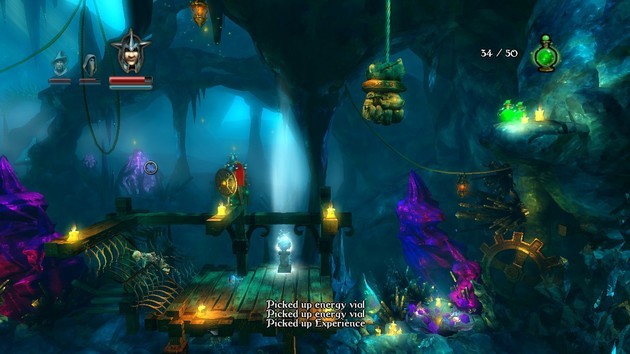 In Trine you control three characters: a thief, a mage and a warrior. Each one has different skills that are needed to complete the game's levels and puzzles.

The heroes' goal is to get rid of the curse that fused them together. During the game it is necessary to combine the skills of the characters. The warrior basically serves to fight. The mage is able to move objects with his mind and conjure new ones. The thief has a bow and arrow and a grappling hook that allows him to reach high places and jump across chasms. 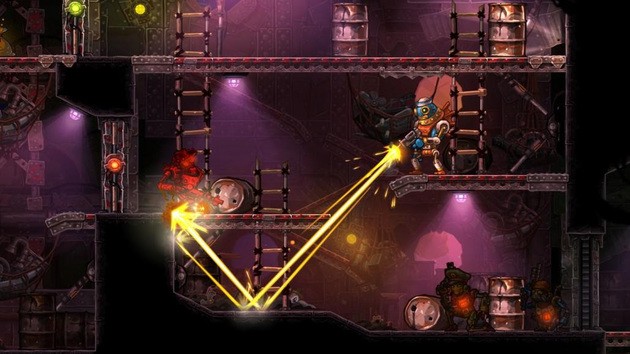 Steamworld Heist is a shooter sponsored by robots dressed as police officers, cowboys, etc. The game involves more tactics than action. In it, the player needs to combine each character's own abilities with specific weapons for each situation.

The game's actions take place in the turn system, in which each robot and enemy has its turn to move and attack. Combat is the charm of the game and requires strategy. Each death on your team can cost you dearly, as you lose experience and on top of that you don't level up the dead character.

The game also has several accessories and items to improve your characters or just decorate. 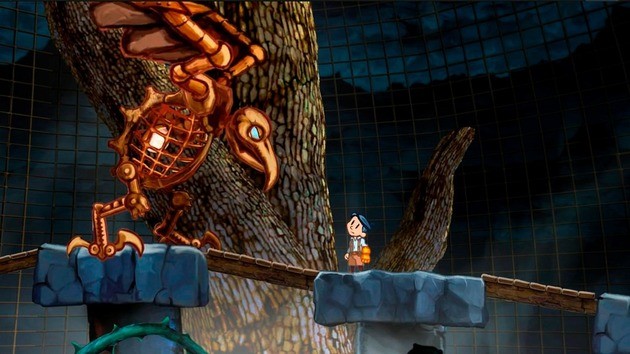 Teslagrad is an extremely fun, hand-drawn game. The adventure takes place in the tower of Tesla, the renowned Serbian engineer and inventor. The game revolves around puzzles that you have to solve with the help of items you find throughout the levels. Once you find the answers, you'll realize that executing them also requires skills like timing and speed.

The entire adventure follows the themes of electricity and electromagnetism, so everything you find along the way is related to Tesla. For those who like puzzles, action and cute graphics, Teslagrad is a great option. 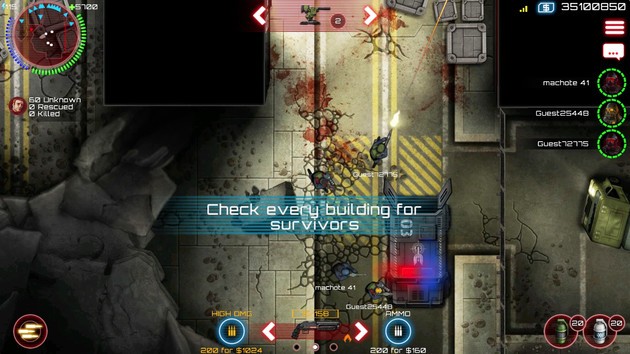 SAS 4: Zombie Assault follows the same script as basically all zombie stories: a virus has transformed everyone. But the story is not the important thing in the game. Here the action is frantic and violent and bloodthirsty.

In SAS 4: Zombie Assault you can play alone or in co-op with up to four players. One way or another, players will kill thousands of zombies while upgrading weapons and equipment, as well as using abilities specific to each character class. 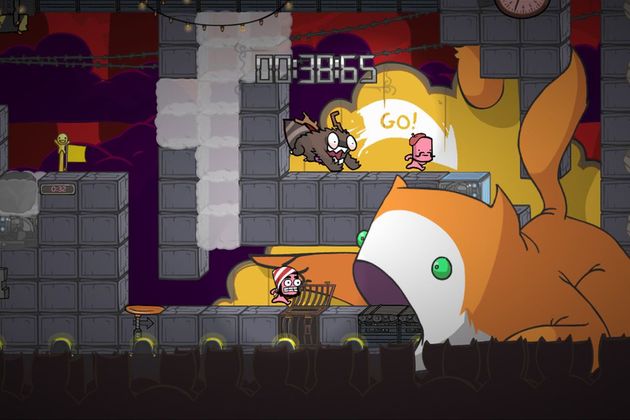 Battleblock Theater is another incredibly captivating platformer. In it, you control a kind of pad that is forced to perform in a theater dominated by technological cats.

The objective of the levels is to collect crystals to unlock the exit and for that you need to solve several mini-puzzles that are distributed throughout the game. The mechanics involve fast moving, double jumping, wall jumping, sliding, running, etc.

It's impossible not to fall in love with Battleblock Theater. The game is fun, funny, challenging and with a lot of content to unlock. On top of that, it can be played co-op or versus with other players. 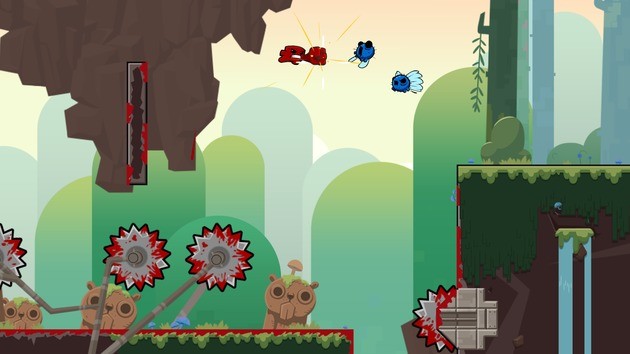 In Super Meat Boy, you're a little piece of bloody meat (that's right) who needs to save his beloved Bandage Girls (obviously made of bandages), over and over and over again.

The game's gameplay couldn't be simpler: you just walk and jump. Even so, the game is extremely difficult and each level presents new challenges, adding increasingly difficult and creative obstacles. You'll always need several tries to pass the level, and with each kill your blood trail remains on the stage to remind you of failures.

Even with the simple objective and even more gameplay, Super Meat Boy has some secret areas that unlock new characters, each with specific abilities.

Super Meat Boy is simple, frustrating and fun at the same time.

add a comment of Meet the 20 best 2D games for weak PC!