Learn how to find and open all Bunkers in COD: Warzone!

Warzone has several bunkers scattered across the Verdanks map, containing high quality loot and plenty of cash. In all, the map has 11 bunkers, one of which is different from the others and requires a real quest to open. Check below the location of these rooms and everything you need to know to open them all! 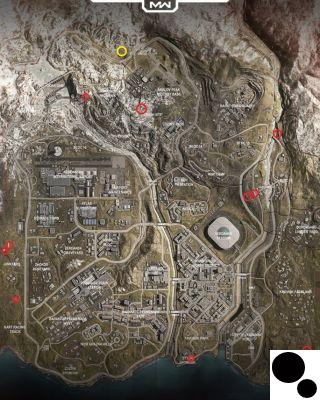 The image above reveals the location of all bunkers. Red circles point to bunkers that can be opened easily. The bunker marked in yellow is the famous nº 11, which we will talk about below.

The first 10 bunkers (red) are accessed through a Red Access Card: 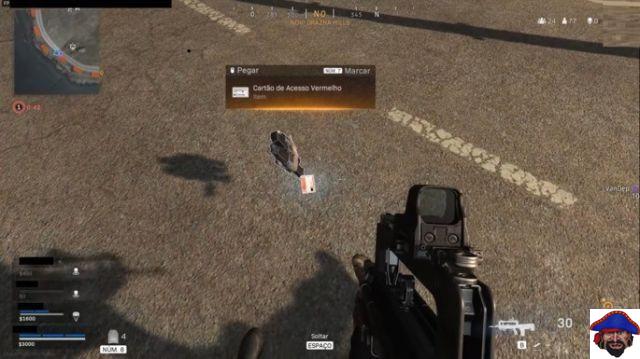 The item can usually be found through loot, either in the scenario, in crates or by killing opponents. Once you have one of them, just head to one of the bunkers marked in red and you will have access.

This is where things get complicated. Bunker 11 can only be opened after completing a long easter egg. To make it easier, we'll start with a summary and a map containing everything you'll need: 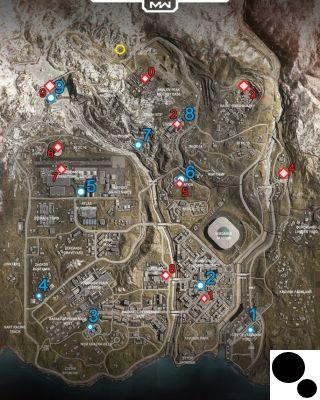 There are several phones spread across the Verdansk map that, according to the image above, we can divide into 2 groups:

Check now the exact location of ALL the phones you will need to open bunker number 11!

Part 1: Telephones that can inform the code in Russian

Using the blue numbers on the map above as a reference: 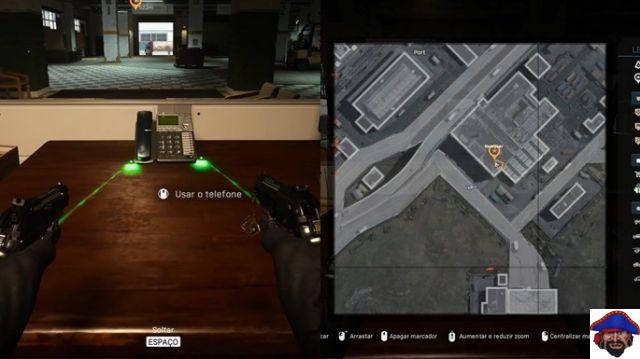 In the Porto (Port) region, enter the Vacant warehouse and find a table containing 2 phones. The right one is correct. 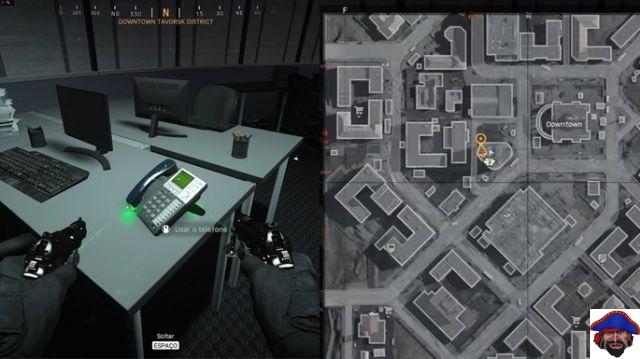 In the biggest central building in Downtown, go up to the top floor before the roof and find the desk with the phone. 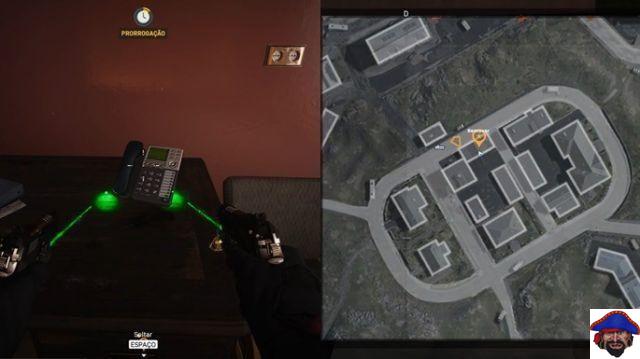 Southeast of Promenade West you will find the Novi Grazna Hills region. Look for the building with an AДBOKAT sign. 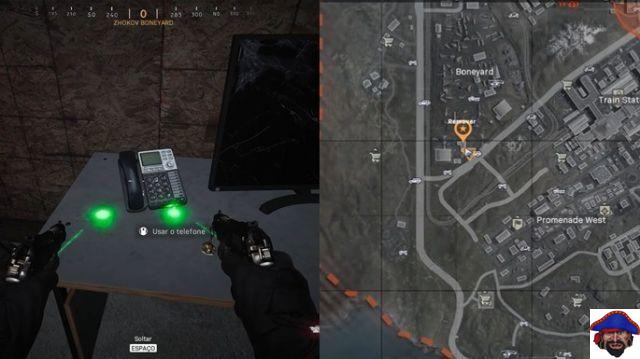 In the southern region of the Boneyard, in a building next to the road. 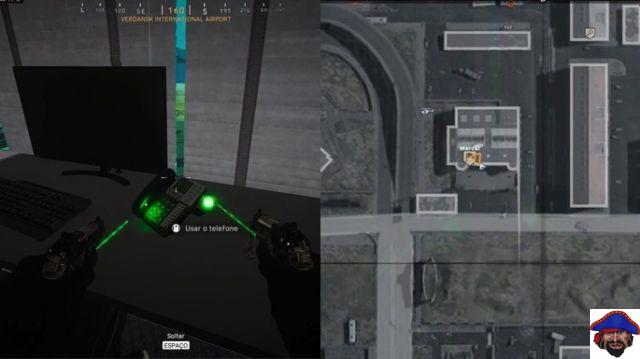 Halfway between the Airport and the Superstore, find a blue dealership and go upstairs until you find an office full of computers. The phone will be on one of the tables. 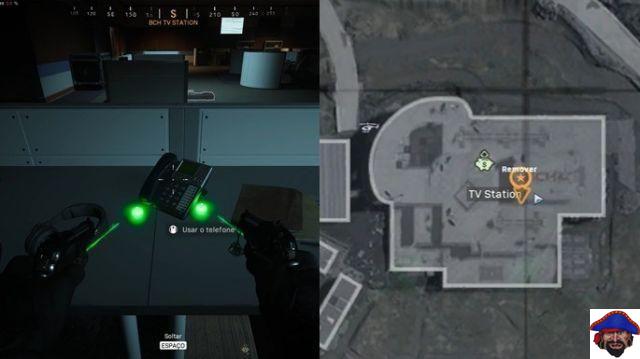 In the main room of TV Station. The place is full of tables and the phone will be on one of them. 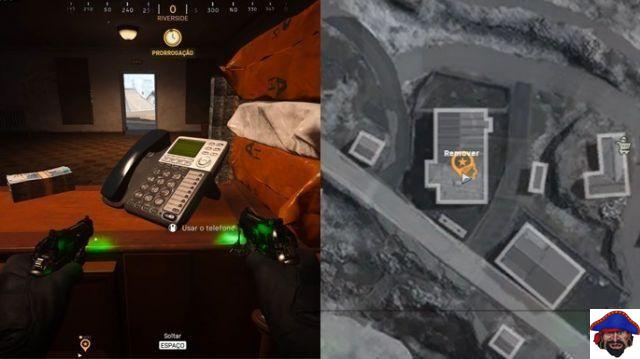 In a complex of buildings southeast of Riverside, the phone will be in a two-story building filled with rooms. 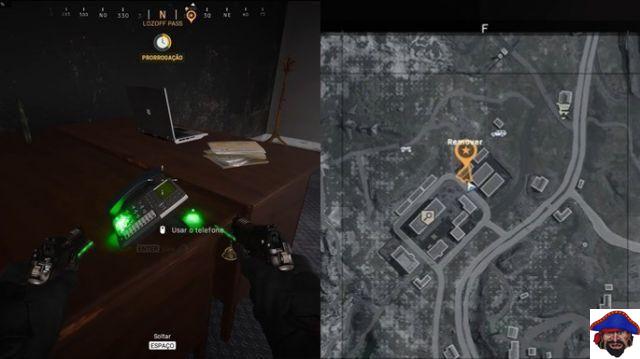 In the village of Lozoff Pass, south of the Military Base, you will find a telephone inside one of the rooms of the establishment with the sign "ABTO". 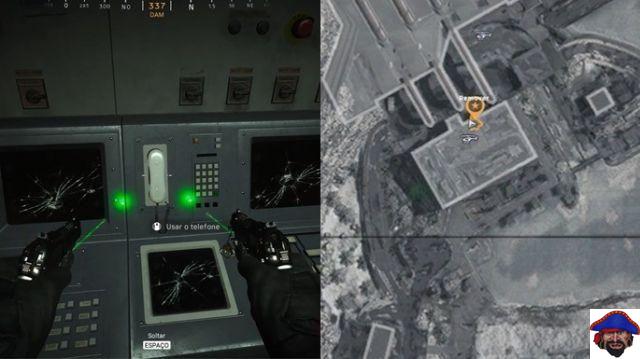 On the Dam, under the building where helicopters spawn. Find some sort of command room full of computers.

At least one of the phones above will report the 3-digit code. You'll know you got it right when you hear a little tune followed by a conversation in Russian. After translating and getting the code, it's time to look for the new phones.

Part 2: Phones that need to be triggered in Russian code order

Now let's go to the second group of phones. These here are the most important as you need to trigger them in the correct order. Think of them as numbered keys that you need to press. 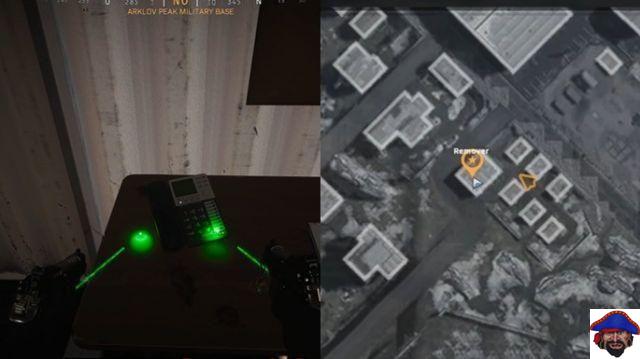 Telephone No. 0 is located at the military base, on the second floor of one of the small houses. 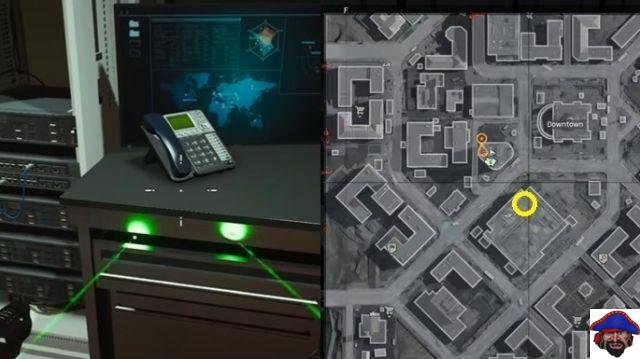 Phone #1 can be found at the Bank in Downtown. 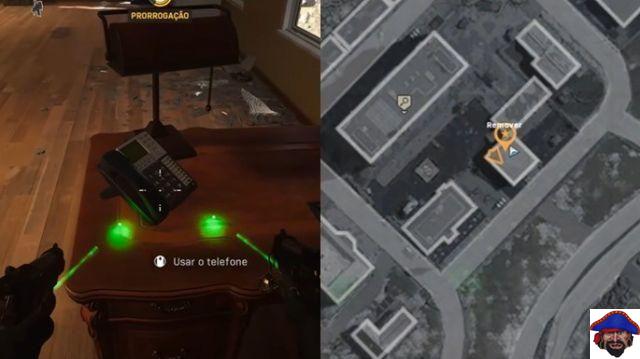 Almost next to phone 8 (which can deliver the message in Russian), in a building next to the cafeteria in the village of Lozof Pass on the second floor. There you will find phone number 3. 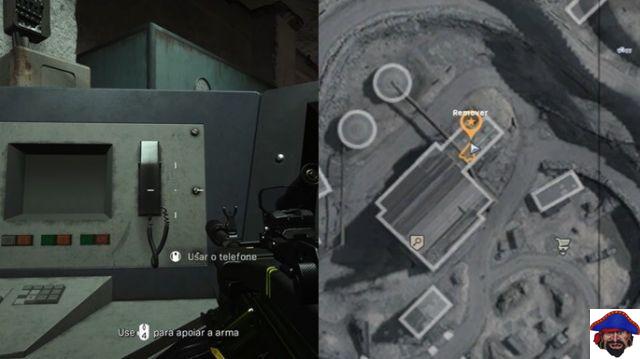 Phone #3 is in the northern part of the Quarry, on the second floor of what also appears to be a control room. 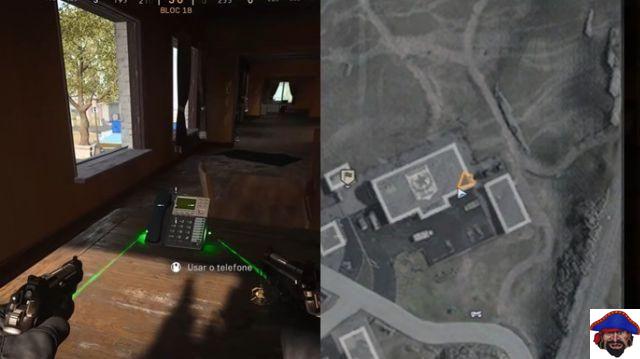 On the second floor of the police station which is halfway between the Quarry and Lumber Yard. 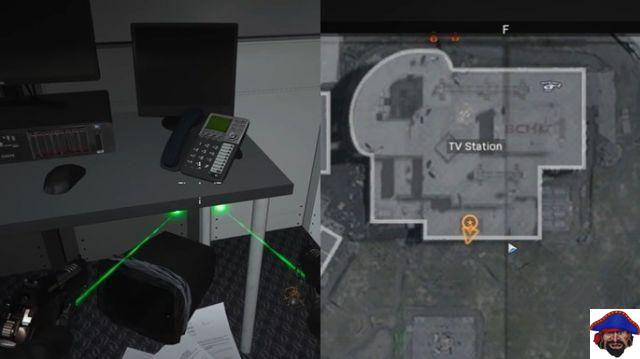 Phone #5 is also inside the TV Station, so you need to be careful not to confuse it with phone #6 from the first part of the easter egg. Look for a separate room from the main hall, just south of the building. 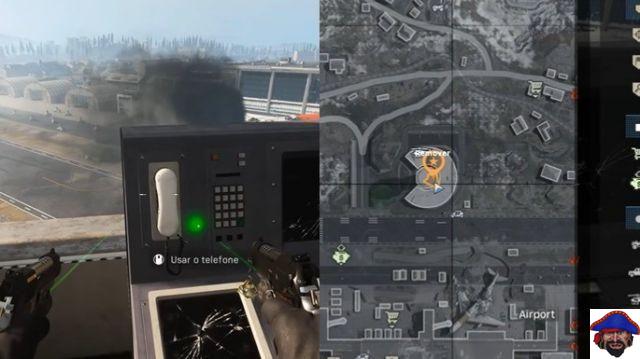 In the airport's conning tower, high above the runway. You need to go up to the top floor. 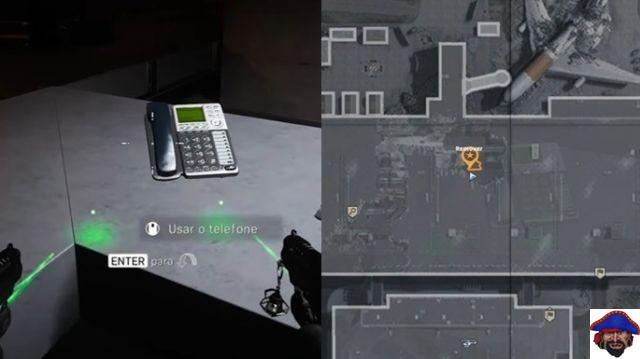 Inside the airport, in the baggage claim area. You'll find the phone on a counter in a dark room. 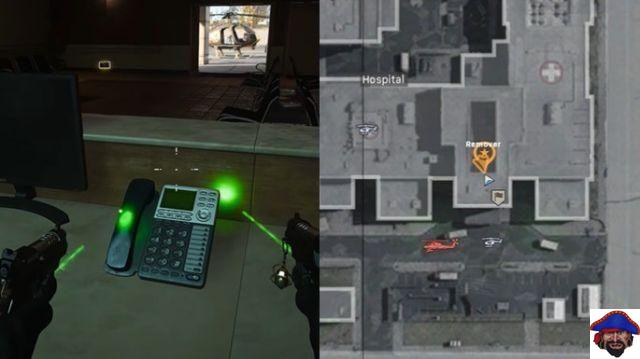 Inside the Hospital, behind the service desk. Just access through the main entrance. 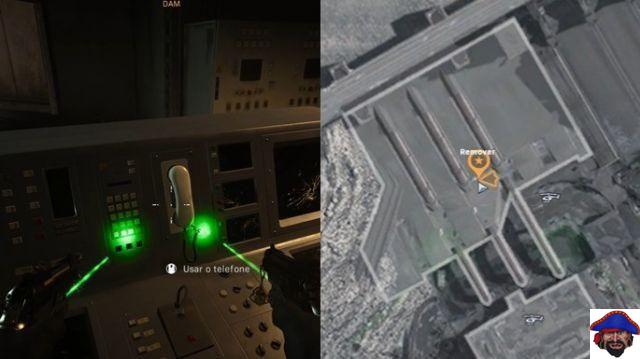 Again at the Dam (Dam), this time at a higher point on the map, in the building next door.

After you activate the 3 phones of the code, you will hear a hit tone with another message in Russian. Then you can move to bunker number 11 (as per the maps above). When you arrive at the place, you will notice that the door light is green, so just interact with the panel on the right and the doors will open. 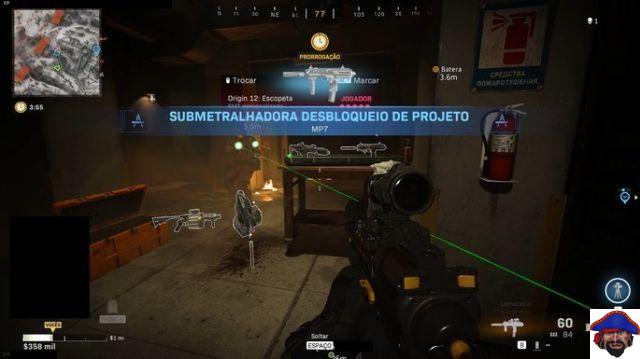 Bunker #11 provides the same type of loot found in the others, but it also has a number of other interesting rooms. Some have items you can interact with, but apparently still useless.

Also, one of the rooms contains two golden MP7s. If you pick either one, you will receive a new blueprint of the weapon, adding it to your arsenal.

Audio Video Learn how to find and open all Bunkers in COD: Warzone!
Learn how to make a fence in Minecraft in 3 steps! ❯

add a comment of Learn how to find and open all Bunkers in COD: Warzone!