How to play Freya in Mobile Legends: tips, build and items

Freya is a Soldier-type character with Initiate and Burst specialties. Although the character isn't very good at the beginning of the game, once she gets her ult she becomes one of the best initiators in the game.

Freya's main role is to jump in the middle of fights and knock enemies out of position. For that, her ult turns her into a great tank capable of leading the team.

Check below everything you need to know to use Freya!

Spawns a holy orb around Freya after 2 basic attacks. When she accumulates three orbs, they deal damage to any enemy they touch (no effect on minions).

Freya leaps to a targeted area dealing 240 (+100% Extra Physical Attack) physical damage to enemies in the area, pulling them to the center.

Freya increases the attack speed of her first three basic attacks within five seconds. The third attack stuns enemies in an area and deals 180 (+60% Extra Physical Attack) physical damage to them.

Freya enters a valkyrie state, dealing 360(+150% Extra Physical Attack) physical damage to surrounding enemies and slowing them. Meanwhile, your physical attacks are increased by 20 and both Physical and Magic defenses are increased by 15. The skill also grants a shield that absorbs at least 200 (+50% Total Physical Attack) damage, based on the number of enemies hit. Lasts 2 seconds.

Your priority should be to max out Wings of Faith for first and Swift Cutter for second, but be sure to put points into Valkyrie whenever possible.


During battles, your default combo should be 1-3-2, i.e. Wings of Faith (which pulls enemies close), Valkyrie (which deals damage to all of them) and Swift Slash.

Regarding battle skills, choose one of the following:

Learn how to play Mobile Legends on PC!

Tips on how to play with Freya 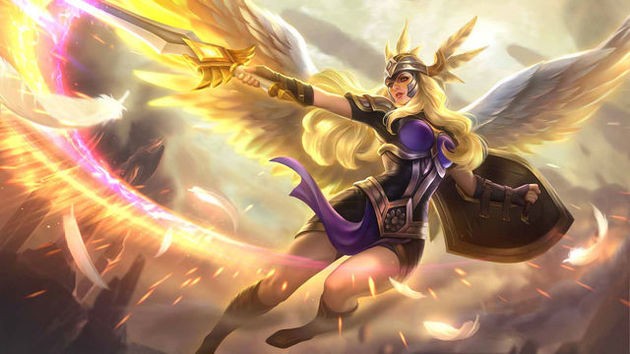 Check out our super guide to all Mobile Legends items!

add a comment of How to play Freya in Mobile Legends: tips, build and items