How to Evolve Combee into Vespiquen in Pokémon GO!

Many Pokémon GO players wonder why their Combee can't evolve, since the Pokémon, in fact, has evolution. If you also have this question, don't worry, we are here to solve it as quickly as possible!

The answer is very simple: only female combees can evolve. That's right. The pokémon is part of the select group of pokémon whose evolution depends on its sex. Other Pokemon of this type are Snorunt, Burmy, Kilia, Salandit, among others. While most of them have different evolutions for each of the sexes, only Combee and Salandit cannot evolve if they are male.

Know right away that the female Combee is much rarer than a male Combee.

How to tell the difference between male Combee and female Combee

To know the difference between the sexes of Combee, just look at the symbol that is on the right side of the pokémon's name. The image below shows an example of a male Combee and therefore the game does not provide an option to evolve him: 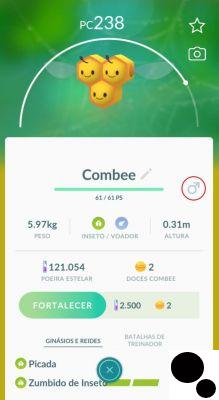 In the case of the female Combee, in addition to the female symbol, the pokémon has a red triangle on the lower head, which also indicates its gender and the ability to evolve. Check out the image below and note that, in this case, the game allows evolution: 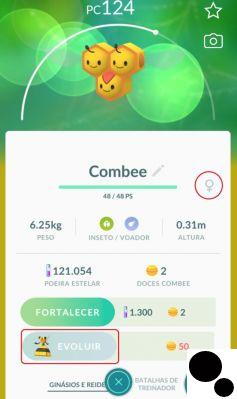 The red triangle on the pokémon's forehead can still be seen on the map, that is, you can know the pokémon's gender even before battle. NOW ATTENTION: be sure to capture male Combees, as their sweets also serve to evolve the female. So, don't make the mistake of thinking that your sweets won't work for evolutions. Keep accumulating them for when you capture a female Combee.

Combee's evolution cost is 50 candies, which can be obtained from both females and males. After collecting the amount, you can evolve it into the majestic Vespiquen: 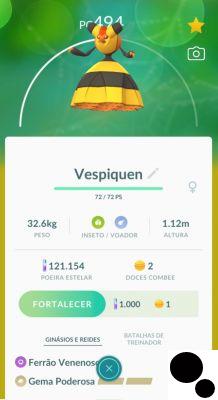 add a comment of How to Evolve Combee into Vespiquen in Pokémon GO!