Don't make any more rookie mistakes. Hearthstone is a card game that takes a while to master, but with the right tips, you'll evolve quickly. Learn how to improve with this comprehensive guide.

See our general Hearthstone tips for how to spend Arcane Dust and Gold and basic game strategies for winning matches. Follow these tips and see that everything will be simpler from now on!

Do all daily and special missions

This is the golden tip that accompanies all players from beginners to the most experienced. Every day, a new quest appears and you have to take advantage of all of them to earn more gold. Remember that you cannot accumulate more than three missions, so do the missions soon and don't leave them for later.

In addition to the daily quests, there are special quests where you can fetch a lot of extra gold. However, these quests can only be completed once, but they are a good way to earn more gold.

Without opening packs, you will have no cards. So, as the gold is low in the beginning, you need to know exactly which are the best packages to open. Expert packs have core cards for all classes and it's a playable edition, so it's highly recommended. The latest expansion packs are also important because they have a lot of cards that play in current decks.

The only exception to the previous rule is that the game guarantees a legendary card in the first 10 packs of each expansion. As legendary cards are usually very powerful, we recommend opening packs of all expansions until this bonus kicks in. The legendary card can even come out in the first pack of those 10, but then it goes back to normal probability, which is between 20 to 30 packs.

If you spend money, buy the Welcome Pack

For players who can spend $4,99, we recommend purchasing the Welcome Pack. There are 20 expert packs plus a random class legendary from the Classic Set. Compared to regular pricing, where two packs cost $10, this is, without a doubt, the best deal you can get on Hearthstone. 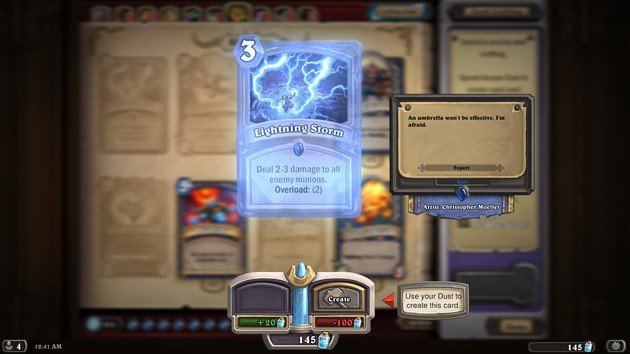 Arcane Dust is a very valuable resource and you have to be very safe whenever you spend it or disarm cards. One of the biggest mistakes new players make is that they disenchant cards they don't use to get Arcane Dust and then create cards that aren't worth it in the medium/long term.


If you want to build a deck, initially think about using Arcane Dust on neutral cards that can play in multiple decks. There are Classic Set cards that have been playing in various decks forever. Think about creating these cards first to give them the ability to play in different decks.

The 100% safe cards to disenchant are the gold cards, which you already have in the normal version. Aside from gaining Arcane Dust for the full cost of the card, golden cards do nothing more than normal ones, they're just more visually captivating.

There are very strong cheap decks

It's wrong to think that only expensive decks win games. It's true that legendary and epic cards are very important, but there are several cheap decks under 1000 Arcane Dust capable of beating 10000 Arcane Dust decks.

Look at the sites where players place their decks. There are several filters you can put like the cost, where you can find it and what you want. Check out some of these sites:

This is a good way to gain experience when you're short on cards. Every Wednesday, there's a new Tavern Mode challenge that you can play many times without having to build a deck with your cards. The only reward is a package, but you can use this mode to do more difficult missions.

Tavern Mode becomes available when you reach level 20 with any Hero. 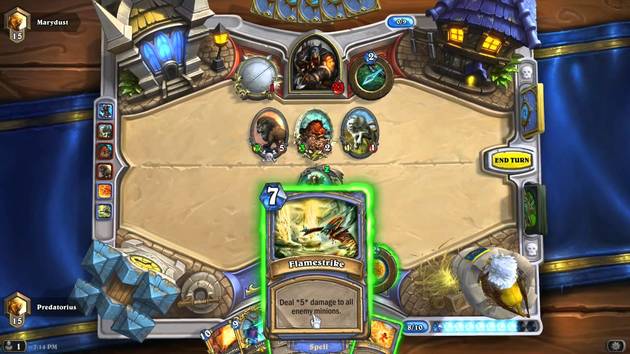 Play with all Heroes

In the beginning, every game you play is always new knowledge that you gain. There are hundreds of cards and little by little you will memorize what each one does. With this knowledge, you will understand the game and begin to anticipate some of your opponents' moves.

The ideal is at the beginning not to cling to any class and play with all the Heroes. There's nothing better than playing with the classes to get to know the strengths and weaknesses of each one. First, reach level 10 with all Heroes to unlock all the basic cards, and then slowly explore.

The games are won in the sequence of the moves that you make in several turns. So you always have to feel the game controlled with your game plan. Even if you play with more aggressive decks, you have to know that you will have enough damage to beat your opponents in a few turns. This is all table control.

In control decks, it is normal for you to always want to eliminate all enemy minions, as your plan is to drag the game into several turns, where you are stronger. In aggressive decks, you sometimes have to decide to attack an enemy minion instead of dealing direct damage to the opponent.

Always remember that an enemy minion may seem harmless, but if it is enhanced with a spell or if you lose all your minions, it can become a threat.

Don't put everything on the table

Another big mistake for beginning players is to play all the cards they have in their hand, even when they don't have to. Everything can suddenly turn around.

Imagine that you already have three minions on the table and your opponent doesn't have any, most likely he has some spell in his hand that will destroy all your minions. If you keep putting minions on the table, the more he will be able to eliminate. The ideal is to save some cards to get an answer.

If you run out of table and cards in your hand, there is a high probability of losing the game.

Do the math and think about the odds 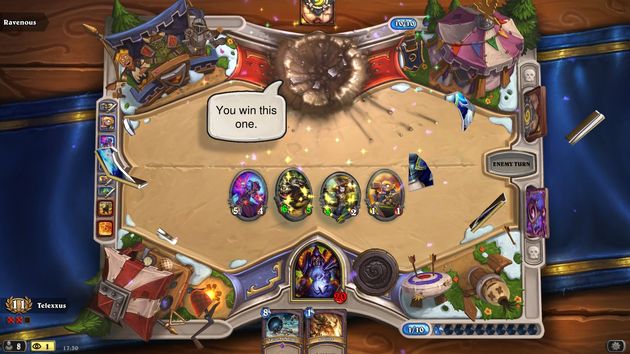 Hearthstone is a game where your math lessons can finally come to some use. You have to think over and over how likely things are to happen. For example, if you're waiting for a card in your deck that currently has 10 cards, you're relying on luck.

Before attacking, always do the math to see if you have enough damage to defeat your opponent. You have more than 1 minute to think, so make the most of every second to plan every move. Many players fail lethal (damage to win) and lose matches because they didn't do the math well. Sometimes finding lethal can seem like a real puzzle!

There are some legit add-ons that count the cards that are out and count the odds. We recommend Hearthstone Deck Tracker to help with accounts.

All the information you obtain before attacking is very important for your decisions. If you have any spells to draw cards, use them before attacking. Always think that you can draw some card that can replace your minion's attack.

The same applies to other cards or abilities that can give more information or cards. This type of approach can often define your victory.

Think a turn ahead

Great players are usually always thinking about the next turns. Only in this way will you be able to anticipate your opponent's moves and will always be one step ahead.

It can be a mistake to think about winning the game quickly and, as a result, make riskier and unnecessary decisions. If you can't win this turn, think about having the necessary conditions to win the next turn. Patience is a great virtue in more balanced matches. 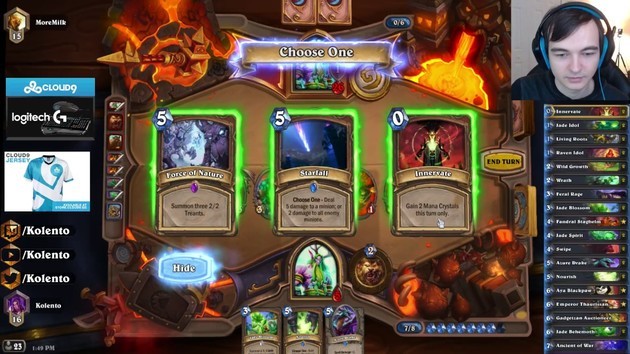 A very important part of learning is observing other professional players. On Twitch, you will find many good players and learn from them.

There are several players from our country that you can follow. Think about the plays you would make and the plays the player is making. So you can see some things you might be doing wrong in your games.

If you like Arenas, don't miss the 5 foolproof tips for the 12 wins!

add a comment of Hearthstone Tips: Complete Guide for Beginners