GTA V Roleplay: know what it is, what the rules are and how to play! 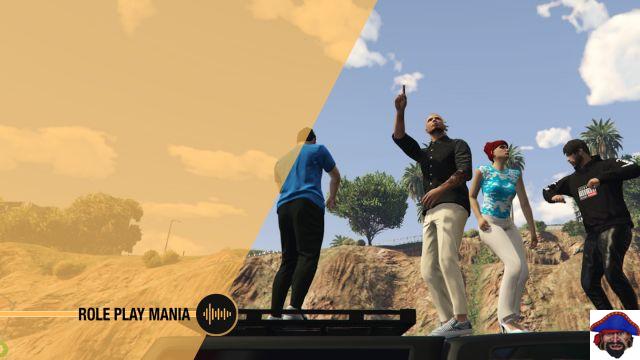 GTA Roleplay is a "new" game mode for GTA V, created by the community of PC gamers. In this article you will understand what this mode is, how to play it and what are its main rules!

What is GTA V Roleplay?

Basically GTA Roleplay is a mod created by the player community. That's why it's only available on PC. These users used existing mods to allow players to take control of Los Santos citizens instead of the protagonists or other criminals.

But what does it mean? In traditional Online mode you create your avatar and do whatever you want with it around Los Santos. Driving like crazy, shooting, hunting other characters, etc. As in GTA Roleplay you are a normal citizen, you lose your freedom. In other words, it will have to fulfill a pre-established role.

The rule, therefore, is what guarantees the fun: let's say you are a salesperson in a clothing store. You need to work until the store closes. What if a burglar breaks in? You may or may not react.

Or it could be a taxi driver. He's ever imagined being involved in an accident from a citizen's perspective. Here you can't even stick to the red light!

The process is a little complicated, but here goes. Firstly, install the FiveM mod. It will transform the game's campaign mode, the offline one, into an extra online mode. That is: it does not interfere, in part, with your experience in the original GTA V Online.

Once you download this mod, you will receive instructions to search the Roleplay servers. All only support 32 people per server. In many cases you will have to get on a waiting list to play, which can be demotivating.

Once you've managed to join a server, that's it: it's time to comply with the GTA V Roleplay rules!

Each server will have its own rules, but there are things they all have in common:

What is RDM and Metagaming?

O RDM in GTA RP it stands for "Random Deathmatch", which is when a player randomly kills another for no reason. Depending on the server rules, you may be kicked for doing so.

Example: "Don't go that way because someone is giving RDM there."

Already Metagaming means you'll bring real-life behaviors into the game. So even if you know something that could impact the game, but your character doesn't, don't use that information. If you play a taxi driver who has never picked up a gun, it goes without saying that you shouldn't pick up a gun and shoot others in the head. You, inside Roleplay, don't know how to shoot.

Is this mode allowed?

The straight answer is: no, it's not allowed by Rockstar. It's not just a regular GTA V mod, as you play on other people's servers, not Rockstar's.


We all know this is a huge breach of the company's Terms and Conditions. In other words: it is at your own risk to invest in this adventure. It could be that it gets banned from GTA V or even from all the company's games, which is quite annoying for players.

If you choose to take a risk, which we do not recommend, remember once again: unlocked consoles do not allow access to Roleplay. Only on PC can you play!

Audio Video GTA V Roleplay: know what it is, what the rules are and how to play!
Basic guide on how to create Discord bots in 2022! ❯

add a comment of GTA V Roleplay: know what it is, what the rules are and how to play!