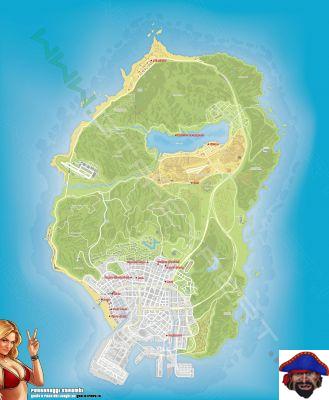 The truth is that Grand Theft Auto 5 needs no introduction. It's a gigantic game that, as one of the most profitable pieces of entertainment media in history, has had a seismic impact on the video game industry and the media in general. With the growing popularity of its multiplayer counterpart, GTA Online, and its planned existence on at least three different console generations (for now), it's clear the game isn't going anywhere.

But another thing that isn't going anywhere is the game's single-player mode. Unfortunately for fans of the satirical crime saga, developer Rockstar Games has never released any single-player DLC for the main game. However, it's a remarkable story, with plenty of scathing reviews and colorful characters.

Michael de Santa, born Michael Townley, is a semi-retired bank robber who is forced to return to a life of crime early in the game. He may be the introductory character, but the jury has yet to decide whether he will beat the other two playable characters in a popularity contest. Maybe he's just lenient enough to get the most votes.

On the other hand, he has some air of mystery about him, considering he has a fake headstone that says he was born in 1965, while all of his friends and family refer to him as 45, which would make his birth year in 1968. XNUMX.


Franklin is the youngest of Grand Theft Auto 5's main protagonists and arguably the most likable.


Born in 1988, he had a difficult childhood with an absent father and a drug-addicted mother. At the beginning of the game, he is trying to earn an honest living, but eventually, he joins the other two main characters and becomes a bank robber as well. It's a pessimistic turn of events, but this is Grand Theft Auto, after all-criminal pays.

The third and final main character in Grand Theft Auto 5 is Trevor Philips. In short, Trevor is a psychopath.

He was born in Canada, and while there is no canonical birth date for him, he claims he “grew up in five states, two countries, fourteen different homes, eight parents, three nursing homes, two correctional facilities, a beautiful flower damaged from a mother."

The main characters of the Grand Theft Auto V storyline. This includes friends, family and associates of the protagonists, in addition to the main antagonists of the game.

An old friend of Michael's, Lester is the mastermind behind the Heists that Michael, Franklin and Trevor perform. He also issues assassination missions for Franklin. Despite Lester's physical shortcomings, he makes up for it with genius-level intelligence, masterful experience in technology and computing, and a keen eye for detail, which makes him an excellent planner for the various heists he has carried out throughout his life.

Lamar Davis is Franklin's crazy friend, a proud member of the Families and co-worker at Deluxe Premium Motorsport. He frequently annoys Franklin about his attempts to leave the gang life behind.

Dave Norton is the FIB agent who is credited with Michael's “death” in North Yankton 9 years ago. In fact, he struck a deal with him, setting him up for a new life in Los Santos. He gives jobs to Michael, Franklin and Trevor. Norton is a corrupt agent of the FIB, although not as much as his boss Steve Haines. Unlike Haines, he is portrayed as a reasonable and polite man, preferring to resolve problems amicably rather than using violence. However, he is more than capable of breaking the law if it means maintaining or advancing his career.

Steve Haines is a highly decorated, albeit highly corrupt, agent of the FIB. Using his position as Dave Norton's superior, Haines uses Michael, Franklin and Trevor to help him undermine the rival IAA in order to secure more government funding.

Devin Weston is a corrupt and influential billionaire who owns several businesses in San Andreas. He has a private army in the form of the security consulting firm Merryweather and blames Michael for interfering with his business. Weston is considerably pompous, selfish, narcissistic, arrogant, charismatic, moody, and over-the-top. He likes to constantly remind the protagonists that he is much richer than they are and that his wealth allows him to do whatever he wants.

Amanda De Santa is the wife of Michael and the mother of Jimmy and Tracey. Amanda was working as a stripper and possibly a prostitute when she first met Michael. The relationship between Amanda and Michael has become very bitter in the last decade and they barely tolerate each other. Michael spends his time drinking, grieving, and losing his temper with her. She spends her money freely on expensive clothes, jewelry, and plastic surgery, while verbally assaulting him. His constant burning of Michael's funds, and his affair with his tennis coach, leads to a set of circumstances that force Michael to return to his life of crime.

Jimmy De Santa is the son of Michael and Amanda. He is a fat, whiny pot smoker in his 20s who is prominently very lazy and addicted to video games. Like the other members of his family, he has a conflicted relationship with his father.

Tracey De Santa is the bratty, fame-obsessed daughter of Michael and Amanda. She has aspirations to become a singer and dancer. Tracey has a very bad relationship with her parents, appearing to be very spoiled, obnoxious, and immature. She is known for being rebellious in her actions against her parents, and even getting to audition for Fame or Shame without their approval.

Harold "Stretch" Joseph is a high-ranking member of the Families who, while considered a friend by Lamar, constantly endangers Lamar and Franklin, sending them on jobs that tend to go terribly wrong. He and Franklin have a strong dislike for each other.

Wei Cheng is the leader of the Los Santos Triads who are trying to expand their drug trafficking operations in Blaine County. He eventually comes into conflict with Trevor when he decides to abandon Trevor's "business" and associate with the O'Neil brothers.

“Angry” Ron Jakowski is Trevor's shy, paranoid friend and neighbor at the Blaine County trailer park where he lives. Like Trevor, Ron is a skilled pilot. He is also the host of reruns of Blaine County Talk Radio's "Blaine County Radio Community Hour" podcast, warning listeners of every conspiracy theory under the sun.

Wade Hebert is friends with Trevor and Ron and a cousin of Floyd. Mentally challenged and stupid, he helps Trevor with his jobs in Los Santos and Blaine County.

Other supporting characters that play an important role in the story of Grand Theft Auto V.

Martin Madrazo is a Mexican businessman and leader of the Madrazo Cartel. It is implied that he is a drug dealer, but insists he is a legitimate businessman, despite recent charges being dropped due to the silencing of witnesses. Martin is often described as a psychopath because of his quick temper and ruthless methods of dealing with people who go against him. Michael finds himself owing Madrazo a lot of money after making a rash mistake.

Simeon Yetarian is the owner of Premium Deluxe Motorsport, the dealership where Franklin and Lamar work. He's a corrupt drug dealer who tricks people into buying luxury vehicles they can't afford, then dispatches Franklin and Lamar to repossess the cars when the payments stop coming.

Solomon Richards is a famous Vinewood film producer and owner of Richards Majestic Productions. Michael, being a huge fan of Solomon and his work, agrees to help Solomon in the production of his final film, "Meltdown".

Molly Schultz is the senior vice president and general counsel for Devin Weston's business. She acts as the corrupt billionaire's right hand. Molly is a devoted follower of Devin and may be in love with him, resulting in her following his orders without question, which Franklin summons her.

Floyd Hebert is Wade's cowardly but hardworking cousin who is drawn into the world of crime. He lives in his fiancee Debra's apartment on Vespucci beach.

Andreas Sanchez works for the Federal Investigation Bureau, acting as the right-hand man to the highly decorated and corrupt FIB agent Steve Haines. He is often seen with him during meetings with Michael De Santa and Dave Norton.

Tao Cheng is the son of the head of the Cheng Triad, Wei Cheng. Unlike his father, Tao seems more interested in parties than running a criminal organization. Tao is sent to Blaine County to negotiate a contract with Trevor Philips Industries; however, after Trevor's operation is attacked by the Aztecs, Tao's translator convinces him to negotiate with the O'Neil brothers, much to Trevor's anger.

Dr. Isiah Friedlander is Michael's therapist. He works for Mount Zonah Medical Center, with a clinic on the coast of Pacific Bluffs. On his official website, Dr. Friedlander is considered a psychotherapist, media personality, secular Buddhist and miniature boat enthusiast.

Patricia Madrazo is the elderly wife of Mexican gangster Martin Madrazo. However, their marriage seems unhappy as Madrazo mistreats her, verbally abuses her and is cheating on her with a Russian named Natalia Zverovna. Michael and Trevor find her when they arrive at Madrazo's house to do some work for him.

Brad Snider is a former partner in crime of Trevor and Michael. He is believed to have been captured in a botched heist in North Yankton prior to the events of Grand Theft Auto V. He apparently still keeps in touch with Trevor, but things may not be what they seem.

Chop is Franklin and Lamar's pet Rottweiler. Although nominally Lamar's dog, he lives with Franklin for most of the storyline. Franklin can engage in a variety of activities with Chop, including walking with him and playing fetch with a ball.

Other minor characters that can be found or appear in Grand Theft Auto V.

Characters from “Strangers and Crazy”

Gunmen, drivers and hackers available for recruitment as team members for the heist missions in Grand Theft Auto V.

Special characters and pedestrians in Grand Theft Auto V are found around Los Santos talking about their thoughts, preaching or conspiracy theories. Some can be unlocked as playable characters in Director Mode after meeting them.

The strippers who work at Vanilla Unicorn in Grand Theft Auto V.

If you liked our list of GTA 5 characters, check it out too:

add a comment of GTA 5: All Characters (protagonists, main, secondary and supporting characters)