Finally released the list with the best FIFA 20 players. Compared to FIFA 19 we had some surprising changes, while other players remained stable and with the same high numbers.

Despite the controversies, Neymar arrives with 92 Overall, while CR7 gets 93. Messi, as expected, is the best in the game, with 94. But to facilitate your visualization, we made a list of the 5 best by position . At the end of the article you can check the FIFA 20 Dream Team!

De Gea is no longer the highlight under the beams. Now Oblak is the boss of the FIFA 20 nets. Soon after, on the rise, is Ter Stegen. Alisson, our country champion in the Champions League for Liverpool, comes in third. The list goes on with Ederson, Courtois, Lloris, Neuer and other good names in the position.

By little Sergio Ramos was once again the best defender in the game. In FIFA 20 it is fair that the post is given to Van Dijk, the Dutchman from Liverpool. But Real Madrid's Spaniard is right behind, followed by Chiellini. Who surprises here is Koulibaly, from Napoli. Godín takes the fifth position, followed by Piqué and Hummels.

Marcelo has gone downhill in FIFA 20, losing his reign to rival Jordi Alba. Overall, the Overall of the full-backs in this edition dropped a lot. Proof of this is that Kimmich, second best, has only 86. He is followed by Robertson, Carvajal and Alaba. Our countrymen Alex Sandro and Marcelo appear even well below what they could be.

Kanté continues to reign as the best midfielder in the game. But in FIFA 20 Busquets is right behind. Our countrymen Casemiro and Fernandinho stand out as great our countrymen on this list. Verrati and Pjanic complement the TOP 10, as well as Raktic, Rodri and De Jong. Fabinho completes the group.

Anyone looking for quality socks will not be disappointed in FIFA 20. De Bruyne and Modric remain at the top of the position. Close behind are Kroos, Eriksen and Pogba. A trio that also wreaks havoc in any midfield.

Neymar Jr. surprises with the high number: 92. Many think that Ney would do badly in FIFA 20, but he is only behind Messi among the best wingers. Then come two more stars: Hazard, now at Real, and Salah. Sterling, Dybala and Mané arrive strong with 88 Overall. Insigne, Sané and Coutinho close the list.

Cristiano Ronaldo is the owner of the centre-forward position. Kane, Suarez and Aguero follow close behind. The young Mbappé is above the established Griezmann, Lewandowski and Aubameyang. Reus and Cavani complete the group! 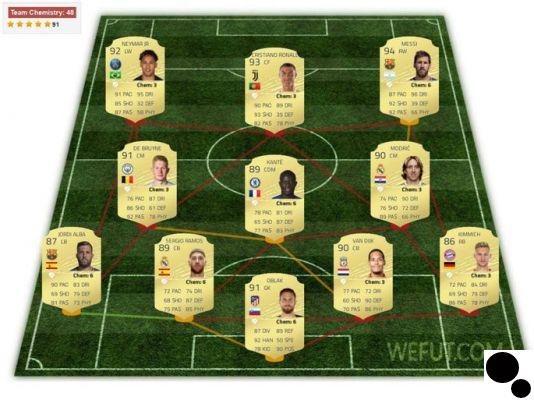 If you do well in FIFA 20 you can have the above team in Ultimate Team. Ever wonder? But of course, dozens of other players could compose other dream teams in this edition of Fifinha. Who else do you think could be there?

FIFA 20: discover the 5 best formations in the game!

FIFA 20 Career Goalkeepers: The best, the promising and the good and cheap

FIFA 20: the most promising players by position

add a comment of FIFA 20: see the best players by position