Do you want those promising players who can improve your team in Career Mode, but you're short on cash? So it might be a good idea to try to acquire some cheap promises, which will make your pocket more peaceful and your squad with higher quality!

We list in this article players whose purchase value is not more than 10 million and who have a salary below 100 thousand. Another detail to take into account is that, in several cases, players were loaned. In the "Team" column we put the team that has the player's pass, not the one he is on loan.

Our language Luís Maximiano is the one with the best Potential and the Overall Score on this list. However, it is also the most expensive to buy. In an economic sense, it is better to hire Vandevoordt, Bonet or Chevalier, as all three are more and not far behind in Potential.

Many of these defenders have the same Potential. Therefore, we recommend analyzing more the financial expenses that will involve the hiring of one or the other, of course, but even more the age of the player. Kouassi and Stergiou, for example, are only 17 years old, so they have a bigger margin for growth compared to the others on the list. Don't hesitate to recruit one of these two!

If you care a lot about the current performance of players, any of the first three options are good, especially Nuno Tavares. But if you just want to focus on Potential and spend as little as possible, Zagré or Katterbach are great bets for your team.

Douglas Luiz is the most prominent in the list of midfielders, both in Potential and in current General. The problem in this case is that it is also the most expensive. If you're looking for a little cheaper options so you don't sacrifice too much money, Palaversa or Fernandes are two good alternatives.

Reinier Jesus and Eduardo Camavinga are two of the highlights of this entire article, with an impressive Potential of 90. In fact, if you can afford it, we recommend that you hire both. Otherwise, don't miss the opportunity to have Gravenberch or Takefusa Kubo. They are cheap in purchase value and in salary they have good Potential.

Ansu Fati is one of the only ones that has 90 possibilities in this article and is therefore a player to watch closely. If you don't want to pay more than 5 million, Pedro De la Vega or Jérémy Doku are other promising youngsters who will make a positive change in your team.

The list of forwards is full of quality, but it is undeniable that Mason Greenwood stands out. Esposito is also not to be overlooked as it ranks second in potential and is the third cheapest to buy. A good investment for a promising future in your team!

Here's an example of one of the best teams of young stars you can form on these lists. There are other possible combinations and, in fact, many players can play in other positions. Take advantage of our tips to form the best team for the future, spending little money. 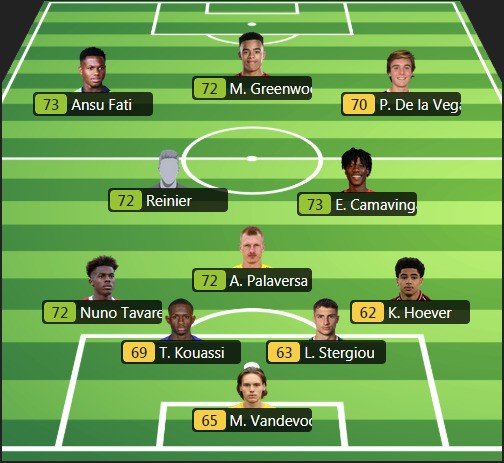 The players that make up the proposed team are:

The good and cheap ones for career mode!

FIFA 20: discover the 5 best formations in the game!

add a comment of FIFA 20: cheap promises with high potential in Career Mode