Name the positions, touchpoints, rotations, everything! In this guide we will show you all the essential information to get you started training on the Vertigo map (de_vertigo), the newest addition to the competitive mode in CS:GO. Despite having been around for years, many players and fans still don't know the map properly since it wasn't used in championships.

See below for everything you need to know to get started at Vertigo!

Like every competitive Counter Strike: Global Offensive map, Vertigo is also a bomb-plant/defuse map. The setting is a skyscraper under construction and combat takes place on two floors, just like in Nuke. The terrorist base is downstairs and both the counter-terrorist base and the two Bombsites are upstairs.

The map is extremely small, closed and curvy, making the use of shotguns and pistols even more viable than in Nuke. In Vertigo, the use of AWP (sniper) is certainly not necessary as in other maps.

Because it is very small, the rotations on the map are very fast for both teams. As there are almost always players nearby, footsteps can be heard easily, but it is difficult to understand exactly where the sound is coming from.

Before continuing, check the name of the positions at Vertigo. Despite being very small, the map has several links and small details for you to pay attention to:

Name of positions in English

If you watch matches with international narration, also see the name of the positions in English: 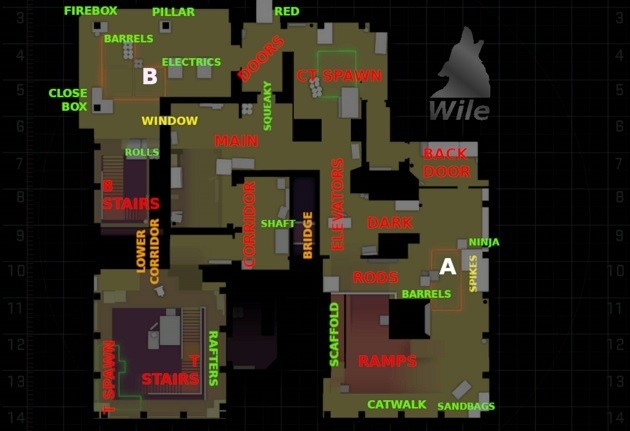 Upon exiting the base, the terrorists have three options to advance: 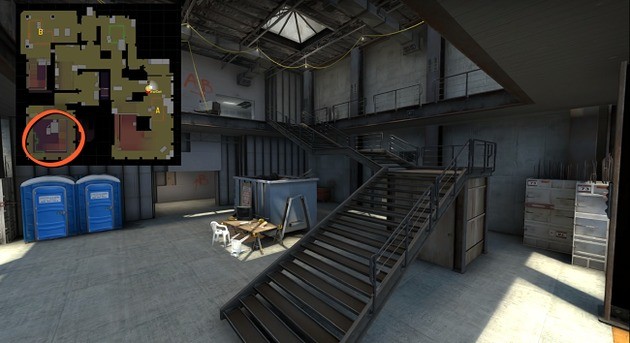 The stairs at the TR base lead directly to the Middle, which allows access to Bombsite B via Hole or Door, and to the Fall (elevator bay), which gives access to Forklift>Ramp>Bombsite A.

B Stairs (or just Stairs) 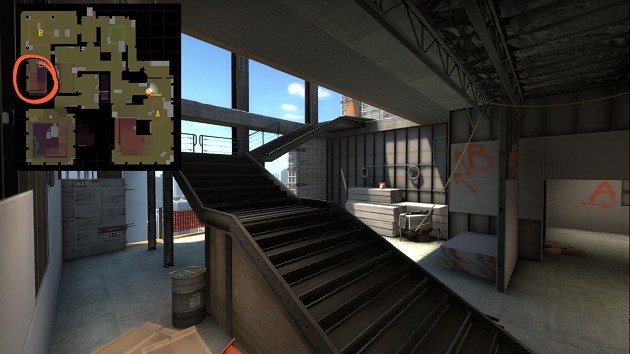 The Stairs are the fastest way between base TR and Bombsite B. Without a doubt, it's a prime target for rushes. At the foot of the stairs there is the option to proceed along the Curve, which gives access to the Bridge>Forklift>Ramp>Bombsite A.

Ramp of the A (or just Ramp) 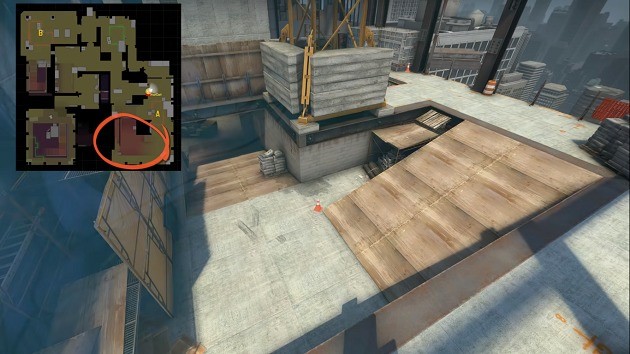 The Ramp is the main path to Bombsite A and is located just after the Forklift. Right next to the Rampa there is a narrower passage called Andaime, which allows the terrorists to split and attack the A from different points, similar to what happens in Inferno by Xuxa/Tapete.

Touchpoints are the regions where teams meet when running at full speed. Basically, it's the imaginary line that if the player crosses, he may already have an opponent waiting. 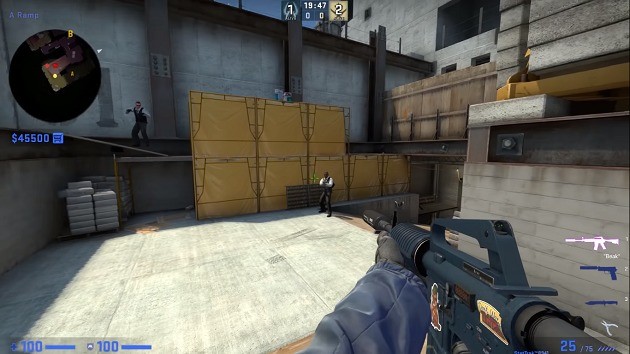 At Bombsite A, contact takes place at the turn of the Ramp. The CTs also need to pay attention to the Scaffolding exit. If the Ramp is lost, CTs can retreat and defend more passively, either through Madeira, Newba or even Fundo/Tetris. 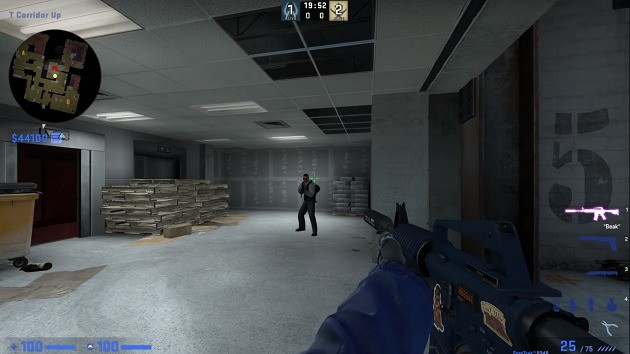 In the middle, the contact takes place exactly at the division between the Middle and the False Middle (near the Fall). Whoever has control of the region can quickly rotate to A by entering the elevator shaft. If they win the duels in the Middle, the terrorists will have access to the Hole (path to B) or the longer path to A. 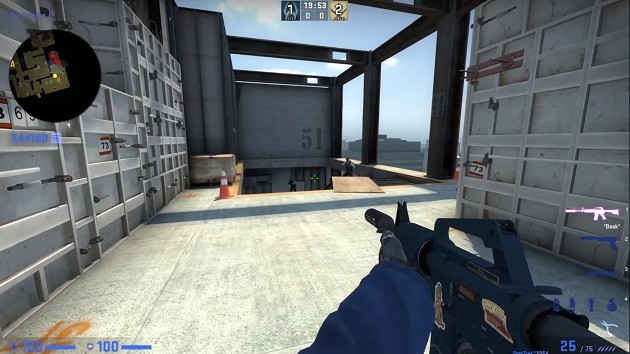 As mentioned before, being the fastest way to Bombsite B, the Stairs are the main target for rushes. In them, contact occurs exactly at the end of the stairs (on the way up). Since the Stairs are narrow, the entrance is easily obstructed with smokes and molotovs, just like Bombsite B in Dust2. 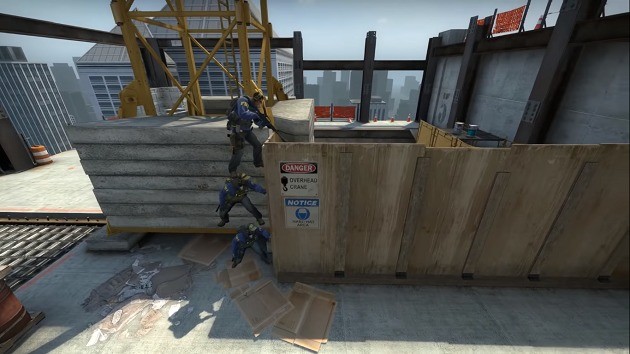 It is possible to mount this boost to have a view of the Ramp and the Scaffolding exit. The strategy is best suited for echo rounds where there is not much to lose. 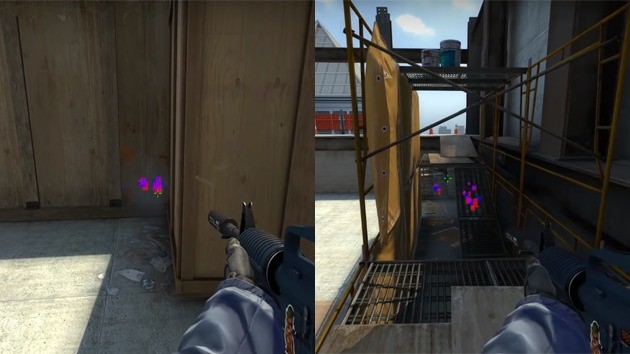 From Madeira it is possible to hit this rod in the image above. Just aim at the middle of the orange square and modify the angle a little to attack the two points of the Scaffold. 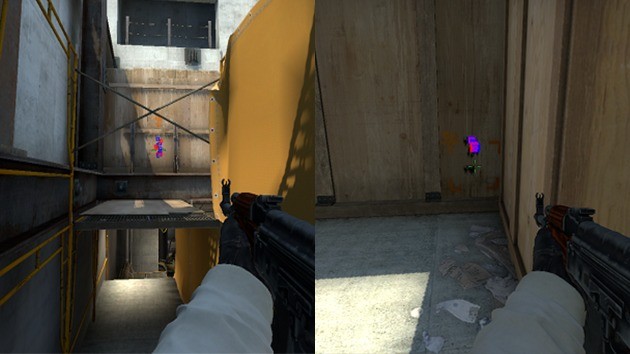 Terrorists can also return the rod quite easily. Just aim under the orange arrow as in the image above (left). The shots will hit exactly the middle of the square on the other side. 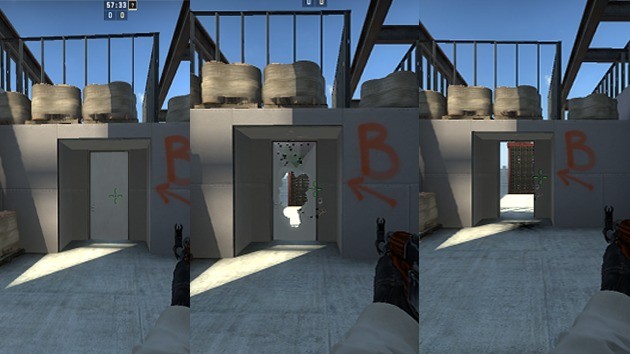 The Door is exactly the same as the Nuke. It makes noise when opening and closing and can be broken with bullets or completely blown up with grenades. 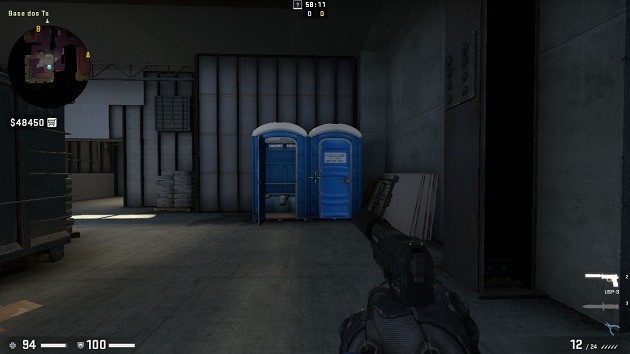 The bathrooms in the TR base are exactly the same as those at Cobblestone. It is possible to open and close the doors to hide and store weapons.

Check out the complete and updated CS:GO savings guide here

Everything you need to know about patents in CS:GO!

add a comment of Essential guide to the Vertigo map in CS:GO