Discover the Bermuda map and find out where to loot in Free Fire!

The action of Free Fire on the Bermuda map takes place on a deserted island, where you face dozens of other players in brutal combat. As in any Battle Royale style game, the player starts the game without any equipment, with only the clothes of the body.

It's essential choosing a place to land with a parachute e start picking up loot if you want to stay alive. Therefore, learning as much as possible about the island map will go a long way towards achieving a victory.

The locations where the loot appears are random and you can either be able to equip your character with different equipment quickly or you can just get a simple pistol. However, there are places that are more likely to be successful than others.

Keys on the Island 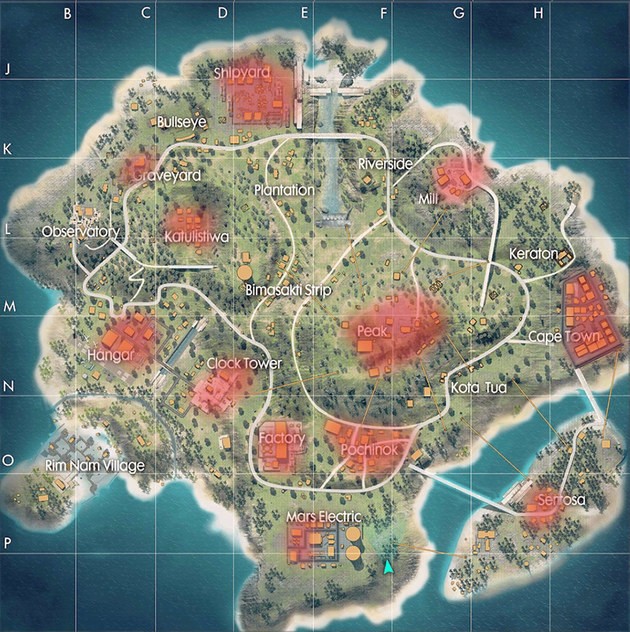 Locations with more buildings and industrial zones are highly likely to have valuable loot. You vehicles will appear mostly in industrial zones and in garages near the main road. Note that these locations attract a lot more players than more isolated ones. If you're still learning to play, avoid these overcrowded zones.

Have you seen the new map? Learn to master Purgatory! 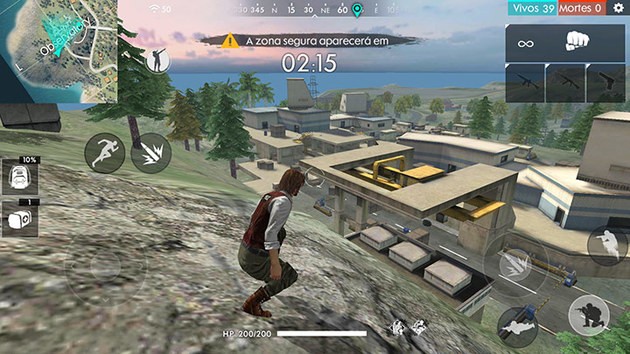 This new zone is in the former location known as the Outpost. There is a lot of loot scattered around the different rooms, there are lots of ramps, high places and lots of blind spots. If you like close range combat this is a good place to start. Basically, it's a kind of Mill in a small point, but with a lot more dangerous zones. It's on the west end of the map which can make it difficult to move to the safe zone depending on the Gas. 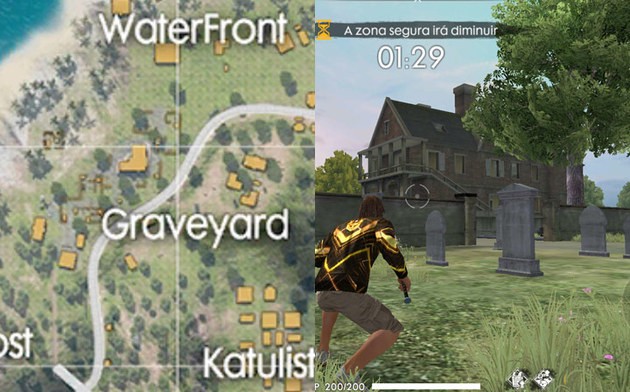 In the northeast part of the map there is an abandoned graveyard. There's a lot of loot among the tombstones, but first try to check out the mansion at the north top. It has many rooms and several floors to check. If jumping there initially, always try to land on the roof and start from the top down. And be careful or there could be one more headstone in the garden. Yours. 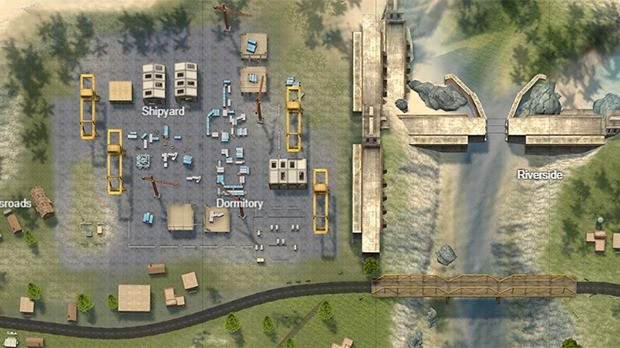 Located in the north of the island, this shipyard has a lot of loot, both in terms of weapons and other supplies such as vests and helmets. You two warehouses in the upper left corner are likely to have weapons, while central containers are typically heavily bandaged. The dorm zone has good loot odds as well. If you're lucky enough to catch a vehicle, take advantage of the road to escape. Watch out for cranes, as some players may use them as a high point to target you. 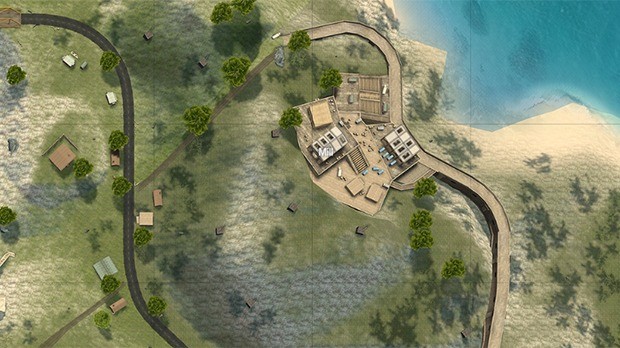 An old metallurgical plant situated on top of a hill in the northwest end of the island is a place full of loot. Always try to land at the top of the hill and only then proceed to the factory. The terrain is uneven, full of ups and downs. The two houses in the lower left corner are in a small valley, so save them for the end, as you're vulnerable to shots from up the hill. The factory also has two roads, making it possible to drive a car closer to the warehouses and then leave. Despite being at one end of the map, the zone attracts many players, so be extra careful. 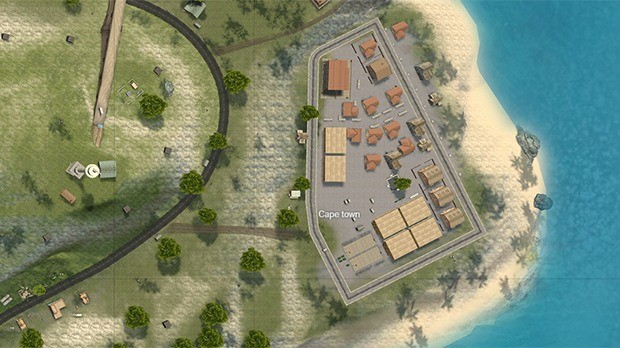 A small town on the northwest end of the island. There is a probability of taking at least one vehicle as a jeep or a tuk-tuk, which is very convenient as the main road to the island is close by. The houses have different rooms that are worth a visit. In the lower left corner are some two-story buildings that provide good locations to target enemies without exposing yourself too much. 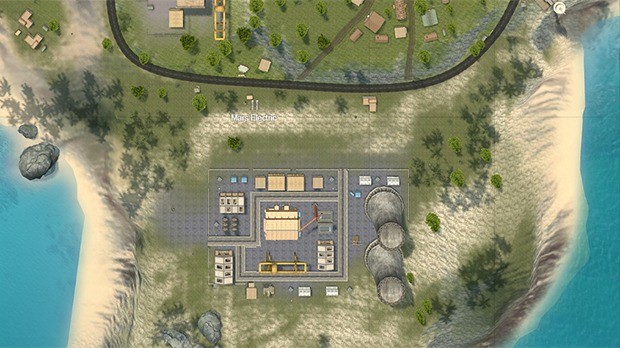 A large site with many areas where good loot and vehicles are likely to be. The warehouses are large and don't have many places to ambush or be ambushed. However, there are many pipes and seals that can hide unpleasant surprises. At the Central, there is also a crane that you can climb up to get a better view of the site. If you can't get a vehicle, use the cover of the side trees to get out of the station, as you're very vulnerable on the hill ahead. 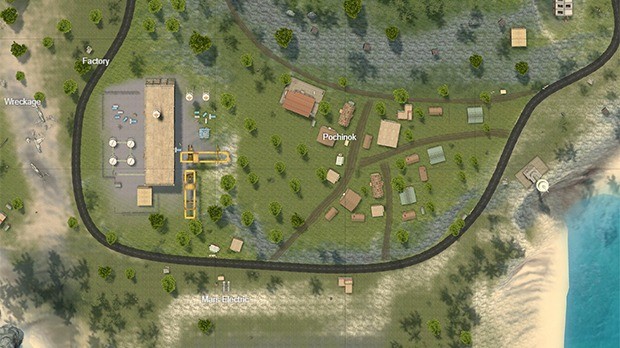 A tall, multi-story building with the small village of Pochinok on the right, the Airport on the left, and the Nuclear Power Plant on the south. If you pick up a sniper or similar weapon in the early stages of the game, you can guard these three locations relatively easily. There are some containers on the right side that are worth a look. There is a high probability of picking up a vehicle at this location. 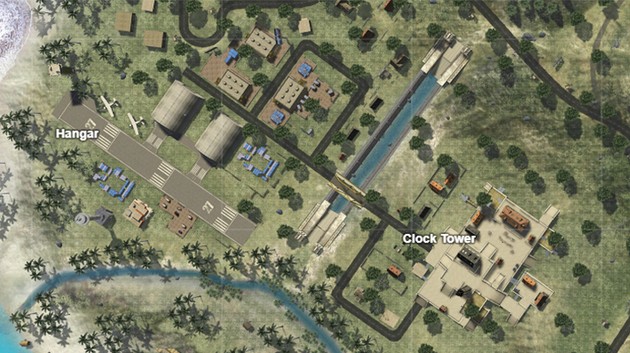 A military zone, the Airport usually has varied and very good quality loot. It is not uncommon to find a level 3 helmet and vest in hangars and trenches. Also exists high probability of powerful weaponry and many extras. The Airport is divided into two main areas: the Hangar area and the Clock Tower, divided by a canal. The Clock Tower area is ideal for landing if the plane's route allows it. As it is slightly higher, it offers good visibility and the main building has a lot of loot. Take care as you proceed along the airport runway. An average sniper will be enough to eliminate you. 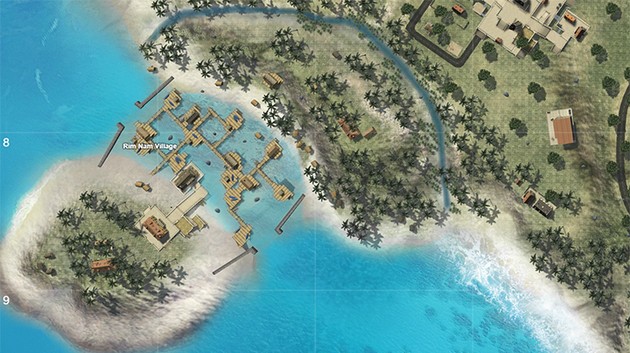 A fishing village situated in the extreme southwest of the map, Rim Nam has good loot possibilities, especially in the main mansion on the smaller island. However, if you jump there, remember to get out using the wooden piers that connect the islands. If you go through the water you will be forced to move more slowly and you will be exposed. There is a stream nearby, use it to sneak close to the Airport if you prefer. 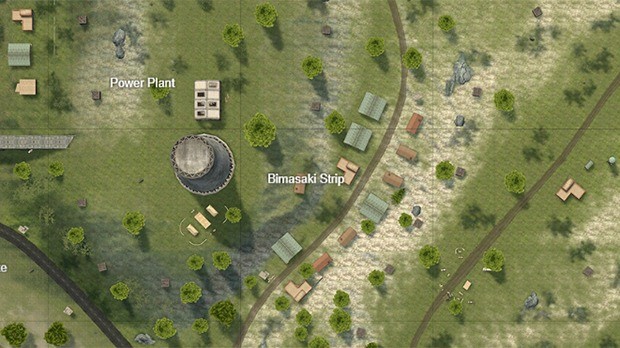 The village of Bimasaki is crossed by a dirt road. It's in a slight valley and it's very easy to get a vehicle in the garages of the houses, as well as different types of weapons. If you don't have any vehicles, enter the village from the left side, using the power station and its chimney to observe the terrain before moving forward. It's a very wooded area, so if the final circles are there, get ready for a bloody fight. 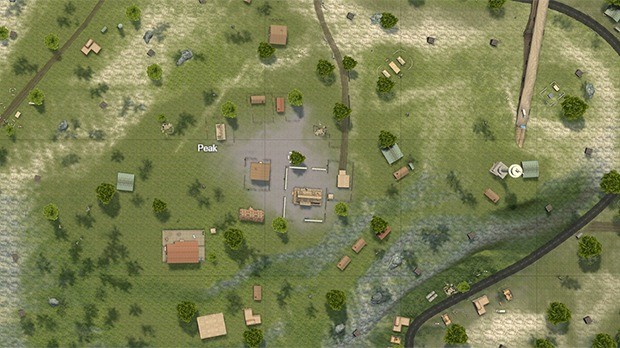 It is a central location on the map, in the highest part of the island. At the top, there is a kind of abandoned hotel. At the base of this hotel it is common to have some loot. It's a very dense area, full of trees and rocks that allow for lethal ambushes, especially in the final stages of the game. If the final circles happen to be there, go right to the top of the hill and move from there. The south side is steeper and has many more trees. The north side has a road from which it's easy to shoot incoming vehicles. 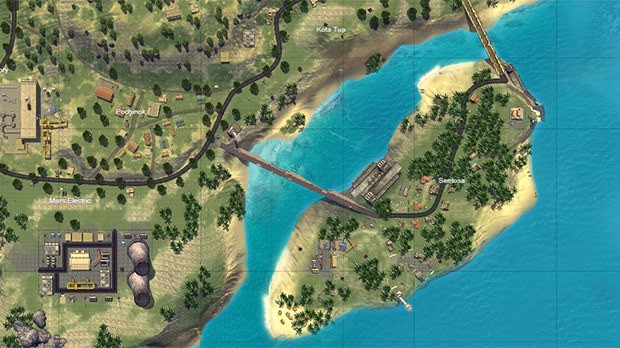 A smaller island, connected to the central island by two bridges. On the east side, there is a kind of lighthouse where there is a high probability of legal loot on the roof of this structure. Use the tires to jump. Down the road there is almost always a vehicle and inside the tunnel there are supplies. In the center of this island there are some houses with high chances of good loot. If you start your game by jumping on the island, remember that you need to go through the put on or crossing the strait swimming. Exiting the bridges is faster, but you may be ambushed on the way out. Swimming is slower, but it's quiet. Of course, while nothing, you can not shoot. 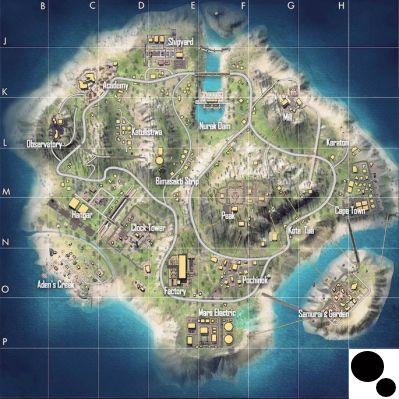 The Bermuda map has been remastered to a new version, for now available to play in Classic mode. In addition to the graphical improvements and changes to some places, four new zones were added to existing places on the map. 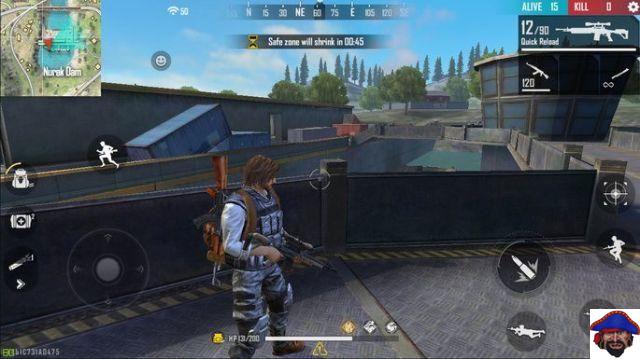 The old hydropower zone has been completely changed, with some cool structures to discover and loot. It's a good area to jump in first and then move to other areas. There's plenty of loot on the different levels of the complex, but watch out for the bridge further north. A sniper has a good line of fire to shoot at the plant. 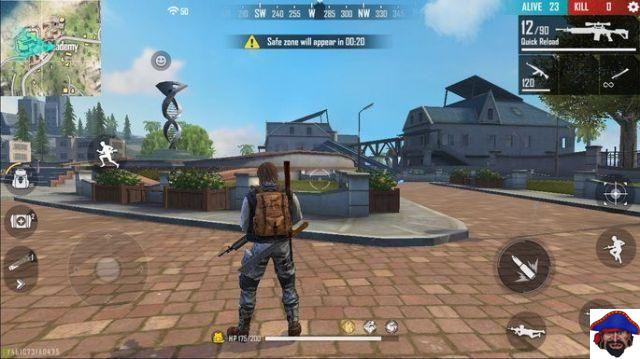 The former Bullseye and Graveyard area gave rise to the Academy, a kind of university. It is a place with large buildings with many divisions and a courtyard with very modern sculptures. There is a lot of loot scattered around the area and it seems to be a very popular spot. Always try to land on the roof of the three main buildings. 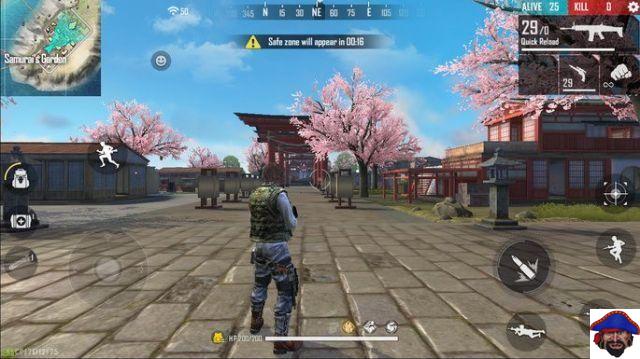 Sentosa Island has given way to a really cool Japanese village. Decorative samurai buildings are full of loot. Although the main street is very beautiful, avoid standing around enjoying the view or you will become an easy target. Sentosa was a very gray place, which became unpopular. Samurai's Garden seems like a good bet to start the game. 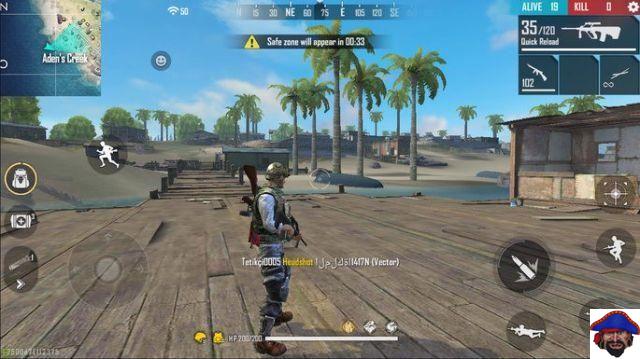 The village of Rim Nam has been practically redesigned again, with no water between the fishermen's huts and more places to hide and/or surprise enemies. The place itself has become less interesting, but there is more loot scattered around and less knee-deep time.

Battle Royale-style games like Free Fire, where surviving to the end is the goal, always depend on some luck, but knowing the game's map makes everything easier. Also learn which are the most effective weapons and tips to increase your chances of winning in Free Fire.

Audio Video Discover the Bermuda map and find out where to loot in Free Fire!
Discover the power of all Dragon Ball FighterZ characters ❯

add a comment of Discover the Bermuda map and find out where to loot in Free Fire!