Layouts are an essential part of the Clash of Clans experience. For those who don't know, they are the structural design your base will have. They take into account not only the way in which the outer walls are positioned, but also how all of their buildings are distributed within them.

For a beginning player this may seem unimportant, but it is not. Having a well-structured base layout can be what will save you from being raided, losing resources, and having your trophies looted. So in this article we will explain everything you need to know about setting up your bases, what types of layouts there are and what are the best ways to structure your defenses in the most varied of occasions. 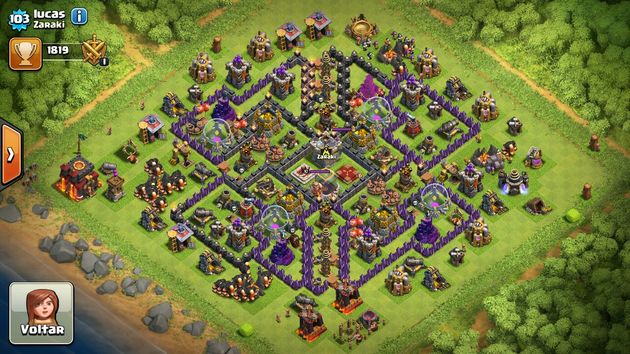 There are at least six types of basic layouts that you can do in Clash of Clans. They are divided according to the player's objective, so we have:

Everyone has their strengths and weaknesses, so you need to take a lot of consideration into your purpose and what each layout can offer you before choosing a type.

It is important to say that within each of the six types mentioned above it is possible to create variations according to what you want. By the way, it is recommended that you do this, since Clash of Clans is a dynamic game. A tactic that works today may be completely ineffective tomorrow, as players always find ways to break through the barriers of their enemies.

As each of the basic layouts doesn't say much, we'll explain everything about them below. We'll also give you tips on what type of enemy to use them against and provide you with strategies you can follow according to the design objective you choose to use. 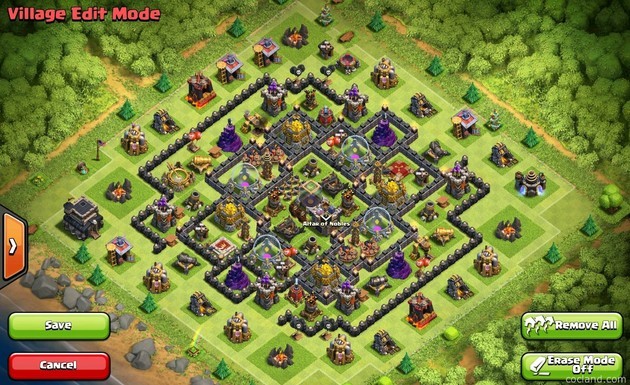 Farming-oriented layouts are for those players who fear other players will plunder their most precious resources. Since unfortunately you can't have everything in life, to protect items like Gold and Elixir, you'll have to sacrifice some less valuable possessions.

We recommend that you keep your clan castle in the center of the base. Around you should be the biggest deposits of resources you have. If you have a Dark Elixir deposit, make sure you stay as close to the castle as possible, as this is the most important item you can have.

The other deposits must be distributed along the entire base, always protected by defense units. Give preference to forming a triangulation of buildings, so that your buildings are not all in the same space. This will force the attackers to spread out to try to destroy the deposits.

Another tactic is to keep as many high-level collectors as possible in your base. Don't even try to place the lower level ones, as more experienced players will recognize the difference between the two. This is important because instead of attacking your important buildings, the invaders will end up looking for the gatherers first. This can give you time to resist the attack.

What is the best design for a farming layout?

In most cases, it is not recommended to build your base from a segmentation model. In the case of a farming layout, however, it is interesting that you divide the base into three rings. The first ring is considered the main compartment. This is where the castle and those resource deposits that you consider most important will be located. It is important that you add specific defenses to this sector, such as air defense and mortars.

In the second ring, divide it into four compartments. Each can be left with a simpler deposit of resources, in addition to, of course, some defensive units or buildings. We recommend that you add the Gold and Elixir deposits to your second ring. Finally, in the last ring are the collectors and more defense units.

Something you also can't help but do is put your Town Hall within reach of your main defenses. Towers, for example, need to be able to hit all enemies that approach that building. Also, they need to be evolved to the maximum, so that you can guarantee that they will be able to eliminate mages and archers.

In addition to the turrets, it is also interesting to evolve the mortars and cannons. If they are at their maximum potential, they can eliminate barbarians, mages and archers quickly. 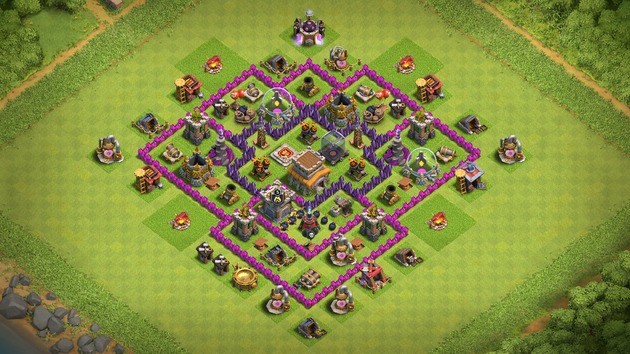 Trophies are often obtained and lost in Clash of Clans from multiplayer battles. If you attack an enemy, for example, you gain trophies if you are victorious, but you lose a part of those you already had if you lose the conflict. The same is true if you are the target of the attack. If you manage to repel opponents, you earn trophies. If you fail, you lose.

Generally speaking, Trophies serve as a way to rank players. This interferes a lot in the multiplayer mode and, consequently, in the possible invasions that you can receive. Knowing your Trophy count is interesting to get an idea of ​​the levels of players that can attack you.


If you don't want to lose yours, therefore, you need to invest in a specific layout that focuses completely on defending the castle and Town Hall. It is interesting that you surround the Town Hall with walls. Outside of them, add turrets, mortars, airstrike units, X-Bow and Eagle artillery. The castle is also an important part of the protection of the city center and should be next to the Town Hall or at least very close to it.

What is the best design for a trophy layout?

In addition to isolating the Town Hall along with the clan castle, everything you do should be thinking about delaying the enemy's advance as much as possible. In other words: creating segmentations of walls around the city center can be interesting. You don't even need to fill in those spaces between one defensive line and another, as in the case of farming layout. You can leave it empty, or with traps, so that the attackers have to waste time destroying another wall.

Another tip is not to place too many buildings outside the walls. If you don't want to lose Trophies, make sure that very little of what you have is destroyed. As you know, it is possible that you lose a minimal amount of Trophies if 50% of the base is dropped. So try to distribute the buildings so that the majority are always behind the walls.

Hybrid layout bases are considered the most common type. That's because your goal is to protect both resources and Trophies. The tip is to analyze the best of each type of layout before deciding how you will build your base. Of course, unfortunately, it is not possible to protect everything at the same time. Unless you are the master of war in Clash of Clans, something will have to sacrifice.

Therefore, in the hybrid layout, your greatest assets will be the air combat and defense units. Mortars, for example, make it easier to protect you because they have a long range. They can thus slow down enemy advances. Another interesting attitude you should have is to place a mage tower near your warehouses. If it is a highly evolved tower, it can take care of eliminating barbarians and goblins quickly.

What is the best design for a hybrid layout?

In terms of design, the castle and hero altars should be centered as much as possible. This ensures that your performance covers a good portion of the base. This type of defense is more efficient in this layout than archer or cannon turrets, as the idea is to protect the base core, but without losing sight of the deposits.

Here the segmentation is also interesting. Especially if each base compartment is small. This doesn't give enemy troops a chance to move too far towards the core. It's easier to slow down the opponent's advance if you don't pool resource deposits as well. Make sure both these warehouses and your Town Hall have at least two walls defending you. 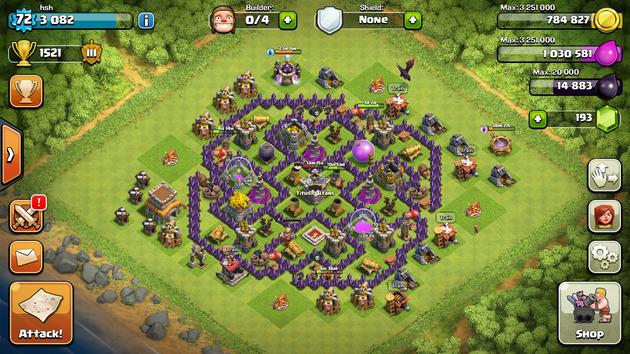 The three layout types above are quite specific, but at the same time they act as derivatives of the first three we presented. Shield Grabbers are perhaps the most "exclusive", as their purpose is to ensure that the attacked player receives a shield of protection for a minimum of 12 hours. To do so, you must be attacked, but you must ensure that the opponent uses at least 33% of your army, getting you around 30% of destruction.

Depots, collectors, and other units or buildings are placed outside in War layouts. The most common tactic is to leave the castle and Town Hall centralized and easily accessible, so that enemies focus on destroying just these two buildings. This causes the invasion to end, but with only 2 stars for opponents.

Finally, the troll bases. They are the simplest, being a very used strategy in farming and in War. These bases have a layout whose objective is to deceive the opponents. Hence the name troll. To do so, you must leave spaces, gaps or gaps in the walls, in order to make enemies think that your base is easy to attack. If done correctly, you can create a foolproof trap for your enemies.

How to keep enemies away from your base?

Bases with a high amount of resources are the most targeted by raiders in Clash of Clans. So in addition to preparing a solid defense, try to prevent enemies from getting close to entering your base. One tactic is to place high-level Gold Mines and Elixir Collectors outside the walls.

This strategy only works if your Elixir and Gold deposits are level 9 and up, as enemies will think they are empty even if they are full of items. This will make them give up trying to breach the walls, focusing instead on the Mines and Collectors you've placed outside the city. When they realize that they have been tricked, they will have already lost a good part of their troops, giving up the attack.

Finally, to avoid the Wall Breakers, units that focus on destroying walls near buildings, is quite simple. Knowing that they don't run towards the wall itself, but towards the building it defends, you just need to place traps between the buildings and walls that you think will be destroyed. This is also effective against Giants, as it gives you more time to kill all possible invaders.

Audio Video Clash of Clans Layouts: Learn how to build a secure base
League of Legends: 5 champions to counter Zoe ❯

add a comment of Clash of Clans Layouts: Learn how to build a secure base