For a franchise as adaptable as Assassin's Creed, it's admirable how even the series' logo continues to iterate and change over time. Each game in the franchise has its own time period and therefore adapts and alters the Assassins logo to match whatever setting or story point is being represented. Whether it was 12th century Holy Land or 8th century Scandinavia, virtually every new location in Assassin's Creed has provided fans with a new iteration over the same triangular logo that has prevailed since 2007.

With each change to the Assassin logo, there is usually a thematic tone representative of that particular entry in the series. This themed design can be as simple as Assassin's Creed Syndicate, where the logo features nuts and bolts and hard edges to symbolize the industrial revolution. At the same time, Assassin's Creed Rogue utilizes a broken logo design to represent Shay Cormac's betrayal of the brotherhood. Either way, each time an Assassin's Creed game is released, the now-iconic game's logo continues to ebb and flow with each time period and setting change. 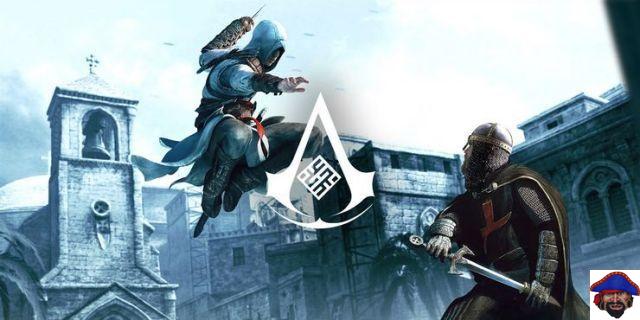 While the original logo still prevails throughout the first Assassin's Creed game, this particular logo is the logo of the 11th century Holy Land Masyaf guild. Officially known as the "Levine Brotherhood of Assassins", this is where it all began for Altair and the franchise itself. First under Al Mualim, and then led by Altaïr after his betrayal was discovered, the Masyaf Guild began a globalization effort to branch out the Assassins across the world. 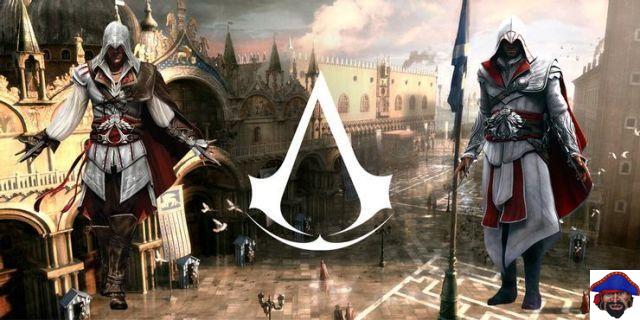 From Assassin's Creed 2 and Assassin's Creed Brotherhood, the game generally uses the default logo as the main game logo. It is important to note that Ezio's Assassin clothing and armor had Renaissance stylized versions of the Assassins' logo, but any type of guild logo used the default logo. The reasoning by which the logo remained standard rather than a stylized version (like the rest of this list) is subject to interpretation. Through Ezio's lore, it may have been a desire to remain humble, much like his character's arc in Assassin's Creed 2. It's a simple but imposing logo that, perhaps from Ezio's perspective, didn't need the extra talent or imagery. . 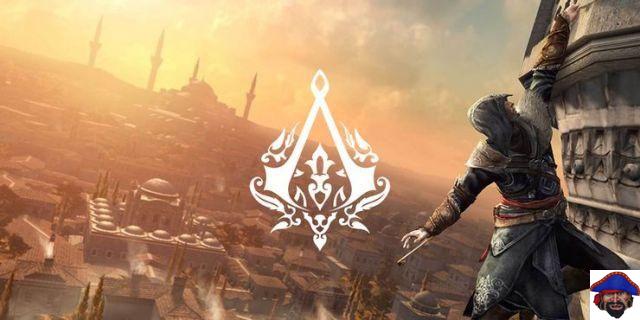 In Assassin's Creed Revelations, the Turkish Assassin guild had a much more stylized version of the Assassin logo. Unlike the previous logo, the Assassin's Creed Revelations logo was chosen to represent the guild of Constantinople by Yusuf Tazim, leader of the Ottoman Brotherhood of Assassins. Ezio, who had originally intended to visit Constantinople for a short time, ended up working with Tazim to help rebuild the brotherhood in the city. This particular design follows early 16th century Ottoman art, which explains the floral and feathery textures around the logo. 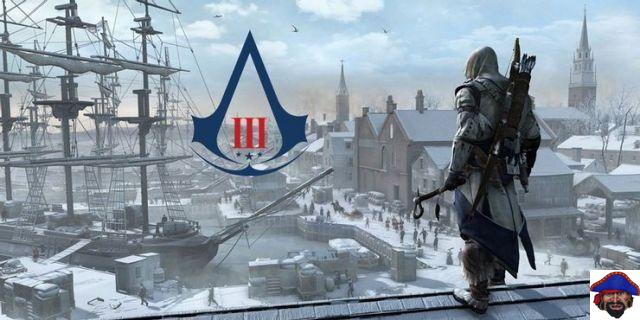 Assassin's Creed 3's logo is a little closer to the American Revolution setting. Once again, the default logo returns with minimal additional flair, as this particular version served more as a logo for the game itself, rather than being contextualized within the game's events. Connor's journey in Assassin's Creed 3 is a lonely one, as there was no official Assassin chapter/guild in 18th century America. Bearing the burden of Assassin's goals largely alone, Connor makes a formative impact on the American Revolution at best. way it can. 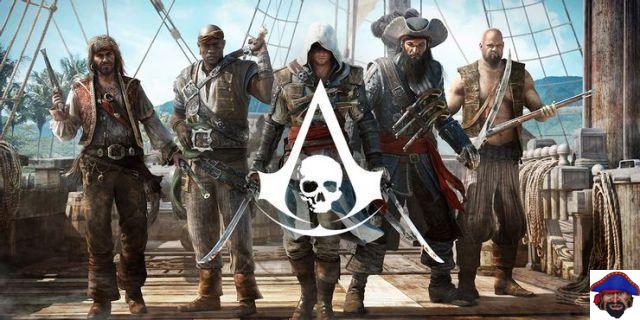 Assassin's Creed 4's Black Flag logo is equally obvious for the pirate theme. Although this time the logo was featured prominently as the flag of Edward Kenway's ship, it strongly represented the theme of the 18th century Caribbean pirate. It is arguable that Kenway's skull logo is a metaphor for the death of the pirate, which matches many in-game events, but the skull logo themed elements are still largely up for interpretation. 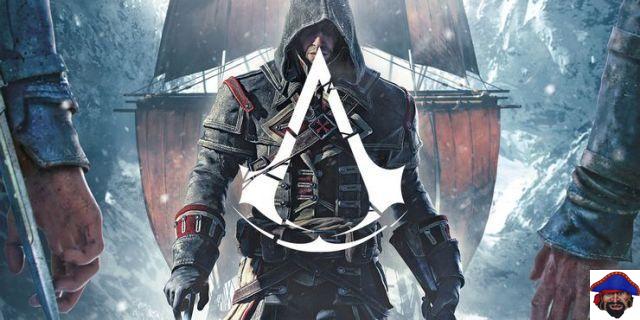 This particular logo is where Assassin's Creed logos started to become a little more abstract and interesting, at least from a design standpoint. For Assassin's Creed Rogue, the Assassin's logo has a broken glass design that is a little more abstract compared to previous efforts. The shattering effect is an effort at symbolism, as it is representative of Shay Cormac's betrayal of the Assassin brotherhood. Shay betrayed the American brotherhood of Assassins after a severe difference in morality, and severely disrupted an Assassin-led search effort to find more Pieces of Eden. 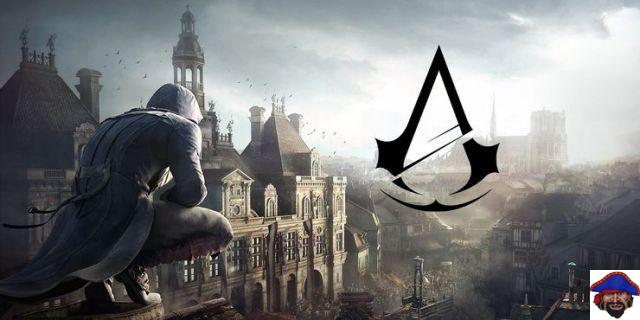 After Rogue, Assassin's Creed Unity continues the trend of symbolism in its amended logo. This particular logo represents the blow of a guillotine, which makes sense considering the game's setting during the French Revolution in the late XNUMXth century. While not as abstract as Rogue's logo, this particular logo is arguably one of the best Assassin logo designs yet. This particular design started Ubisoft's trend of designing a new logo that was unique to each time period. 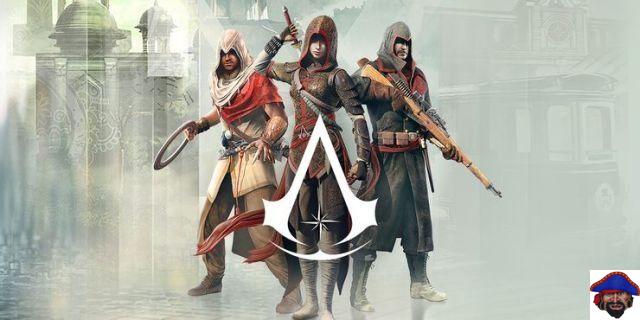 Even though these three games are spin-offs, all three games ended up having a unified logo for them. The Assassin's Creed Chronicles logo features what appears to be a compass-style star, and while it is arguably representative of Chronicles: Russia, this particular logo was used for all of them. In fact, there's not much more to the star symbolism than it resembles a compass, theoretically referencing the fact that each game took place in a new setting. 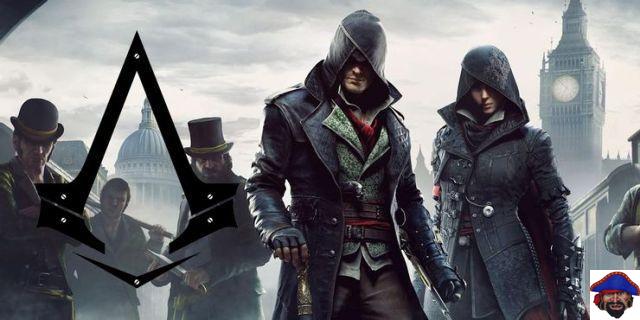 Following in Unity's footsteps, the Assassin's Creed Syndicate logo represents the British Brotherhood of Assassins. Along with the stylized sharp edges and angles, this particular logo had several nuts and bolts included to symbolize the Syndicate's time period: the UK industrial revolution. 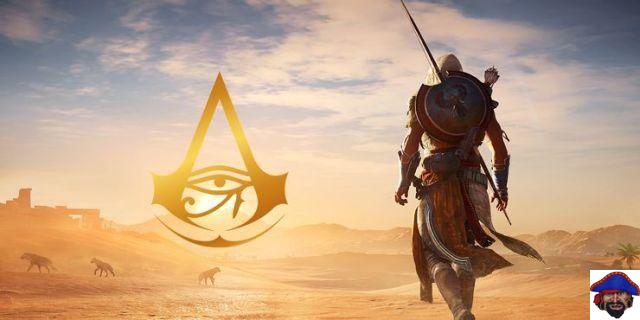 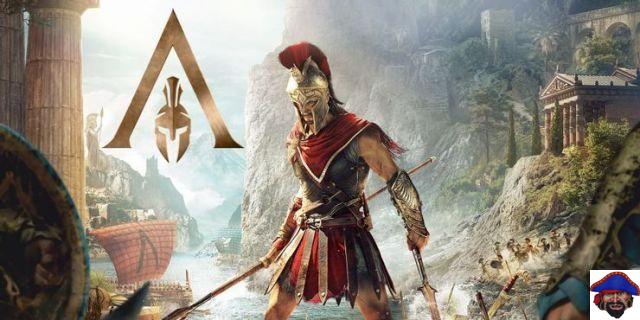 Perhaps the biggest change to the Assassin's Creed logo so far, Assassin's Creed Odyssey has entirely remixed the default design. While the overall shape is the same, the arches resembled Greek architecture/pillars, and the Spartan helmet was an obvious nod to the middle period. This helmet could also represent the Wolf Helm, the helmet of the Spartan polemarco Nikolaos, who also happened to be the player character's adoptive father (who is canonically Kassandra, but could also be Aleixo). 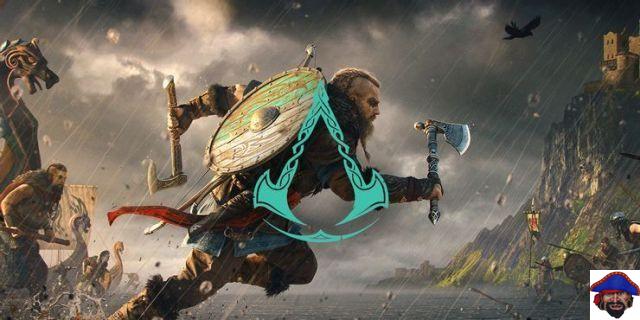 Each Assassin's Creed game continues to iterate on the series' classic logo, and while some designs have been a little more obvious than the last, the latest designs show that each new logo will have a clear stylistic and thematic inspiration. You can check out other lists like the 11 best Assassin's Creed games.

Audio Video All Assassin's Creed franchise logos explained
All Terraria NPCs: where to find them and what they offer you ❯

add a comment of All Assassin's Creed franchise logos explained