All about Arena of Valor maps and battle modes

Arena of Valor offers a quality MOBA experience for free on your mobile. The Chinese game has several maps and battle modes that may seem intimidating at first, but are actually quite easy to learn.

Understand everything you need to know about the game's maps and different battle modes.

What is the traditional Arena of Valor map like? 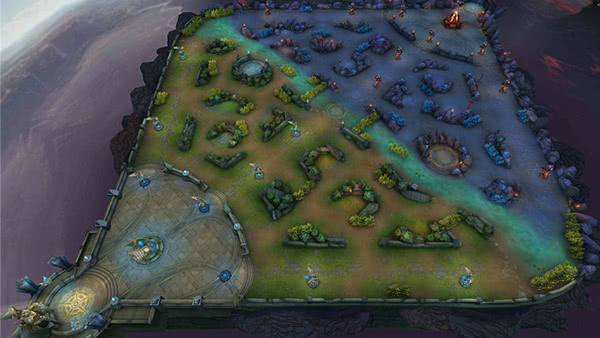 In this first part of the article, we are going to focus on the most popular map in the game, the one that is used in 5v5 matches. Like many MOBAs, Arena of Valor has the map divided into 3 "lanes": Top, Middle (also called Mid) and Bottom (or Bot). Top is the top lane of the map, Mid is the middle lane, and Bot is the bottom lane.

The lanes are the paths that the heroes take to reach the enemy base and destroy its core. Something common in all lanes is the objective of killing minions and attacking enemies, preventing them from attacking your towers or even reaching your base.

In the middle of the map is the Jungle (or jungle) which works as an area to gain experience in fighting monsters and farming gold. Junglers (players dedicated to fighting in the jungle) are usually agile heroes and can also use this area to gank enemies.

There are 20 towers in Arena of Valor, 10 for each team and 3 for each lane. These buildings help protect from invasions and are divided into three different types, varying their HP, attack level, armor and magic resistance. The closer to the base, the stronger and more powerful the turret, with the Core being the most important of the turrets.

How to play in each lane 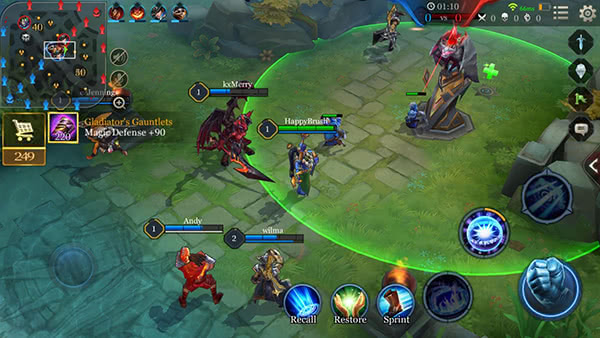 Typically, Top and Bot lanes are played with two heroes each, while Mid is usually played by just one player. What will be the best way for you? This will depend on your hero and your playstyle.

Heroes from classes like Warrior, Tank, Support, or Marksman are often ideal candidates to play Top or Bot. But Mages or heroes with ranged attack are a great choice for Mid, while Assassins are perfect heroes for Jungle.

The Jungle is the area of ​​the map populated by monsters that give experience and gold when they are defeated, with some kills even granting buffs or upgrades to the Jungler or your team. But what are the main monsters what can you find in this jungle? 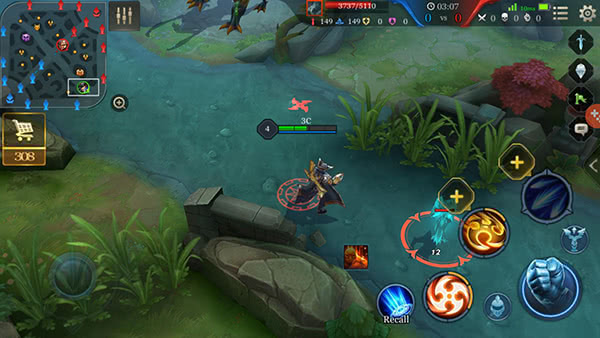 These are the monsters that patrol the river along the Top and Bot lanes, being the least powerful creatures you will find in the jungle. Incidentally, this is an animal that only attacks if attacked first, which makes them really docile creatures.


So what do you get out of killing one of these little monsters? Upon its defeat, the creature gives gold, experience and releases a special light that will be like a spy in enemy jungle, revealing the heroes that hide there. 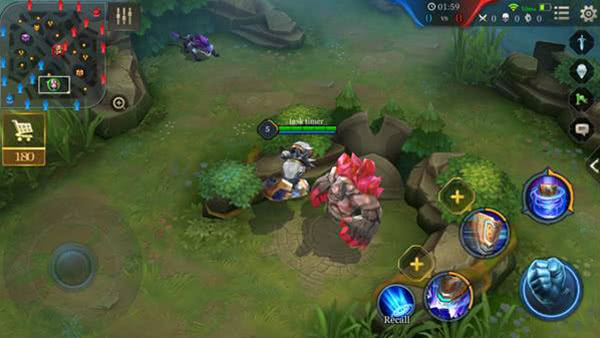 Defeat the red Golem and you'll receive a temporary buff that reduces the enemy's movement speed when you hit them with a normal attack and deals extra damage. 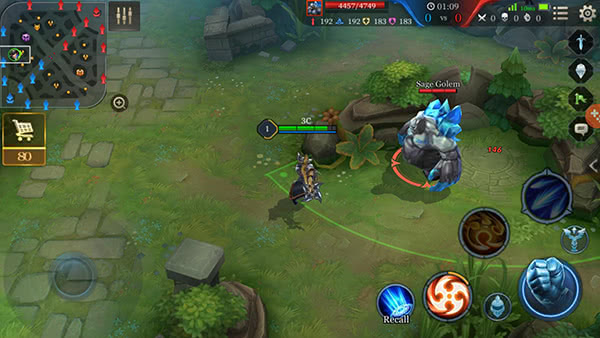 When defeated, the Blue Golem gives the player a 20% decrease in cooldown and a 2% per second increase in mana regen. 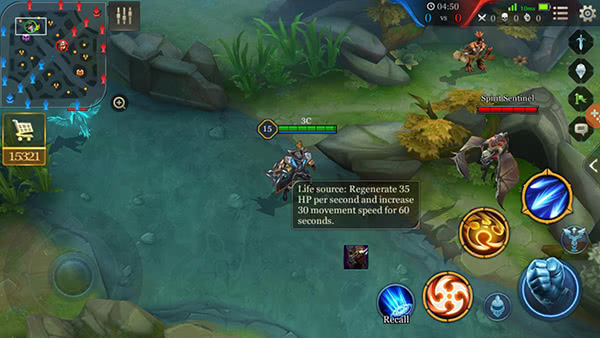 This flying monster is a danger to fight early in the game, so it's best to wait a while before trying your luck. Upon the death of this sentinel, the hero gains gold for the entire team, regeneration of 35 HP per second as well as a 30% bonus to their movement speed. 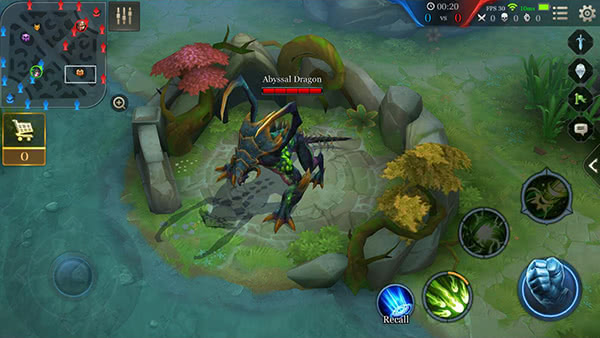 This is one of the monsters that are essential to help your team reach victory and should be considered a priority in the game. When defeated, the dragon gives gold and experience to the entire team. 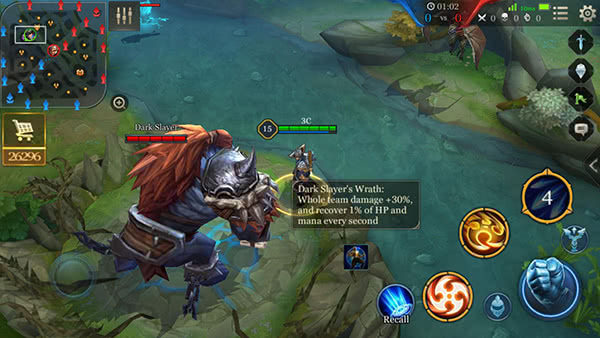 There is no creature as strong as this in Arena of Valor. The Dark Demon is really a very difficult and powerful monster to face – and that is why the reward of his death is so great.


Defeat the monster and your entire team receives a 30% bonus to damage dealt and a 1% increase in HP and Mana regeneration.

The different battle modes and their maps

Arena of Valor offers varied experiences to its players – ranging from the traditional 5v5 to the innovative War of Hooks, but what can you expect from these battle modes? 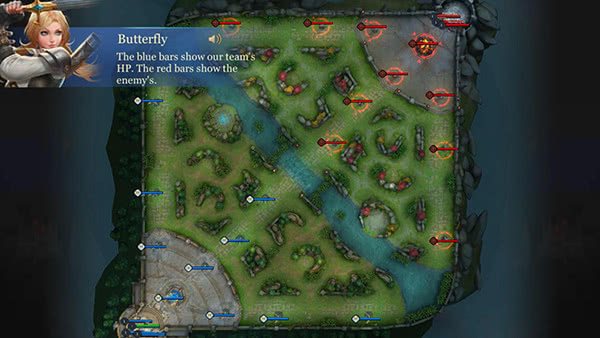 It is in the Great Battle of the Antaris battlefield that the most competitive game mode from Arena of Valor. The classic 5v5 is the one that will demand more strategic thinking from its players and where we see the importance of play as a team.

As their name implies, they are two teams of 5 players fighting for the destruction of the enemy base. In this classic mode, it is essential to defeat monsters like the Abyssal Dragon and the Dark Demon to reach victory. In this map there is the Altar of Life, that is, the possibility for each hero to return to their base to restore lost Health.

Each player starts with 300 gold and battles usually last between 12 to 18 minutes, this being the slowest mode, but with the highest gold and experience reward. It is in 5v5 that you should apply everything we talk about in this article.

Vale do Combate: 3v3 on the Battle in the Pampas map 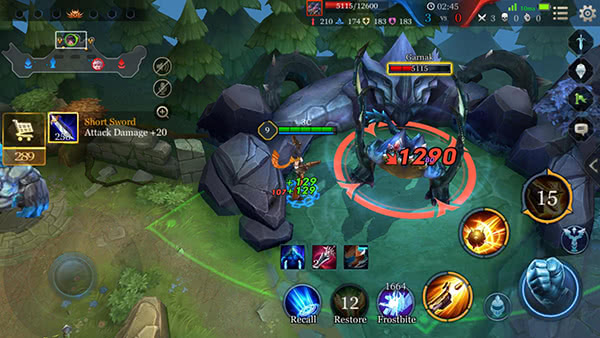 In Vale do Combate, each team can only have 3 heroes, making the process of choosing characters more complicated. Each player starts at level 3 and with 800 gold and in this mode all heroes gain experience and gold much faster.

There is only one lane in this battle mode and only one tower defending your base, but the objective is the same as in 5v5: destroy the enemy base. On this map there is also the Altar of Life.

Here there are two different monsters waiting for you in the jungle: Garnak and Winged Sandals. when defeated, Winged Sandals grants a 30% increase in movement speed for 30 seconds; already Garnak is a two-headed dragon that gives different bonuses for each defeat:

The 3v3 game mode usually lasts between 5 to 8 minutes, being a fast and fun alternative to the slower 5v5. 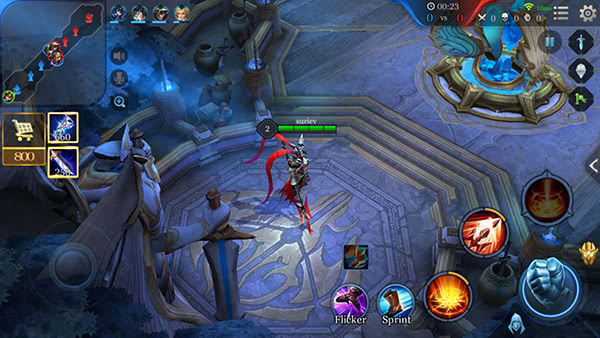 This is one of the most fun and insane battle modes in Arena of Valor, despite having only one lane and two towers for each team. In Abyssal Conflict, the Challenger enters a 5v5 two-team battle mode, but with one important twist: you won't be able to choose your heroes. The choice of characters is made randomly by the game itself at the beginning of the game.

But that doesn't mean you don't have the option to change your hero. There is a first reroll attempt which is free, but from there you have to use gems to gain the chance to change heroes.

Each player starts with 800 gold and the objective is the same as in the traditional way: destroy the enemy base. There is no jungle, so there are no monsters. This means that to gain experience and gold, you will have to kill minions and other heroes.

On the Abyss Throat map there is no Altar of Life nor the option to return to your base or the possibility to buy items at any time. Only after your hero dies will you be able to acquire the much-needed items.

Learn how to earn gems and how to use them

1v1 on the City of Shadows Arena map 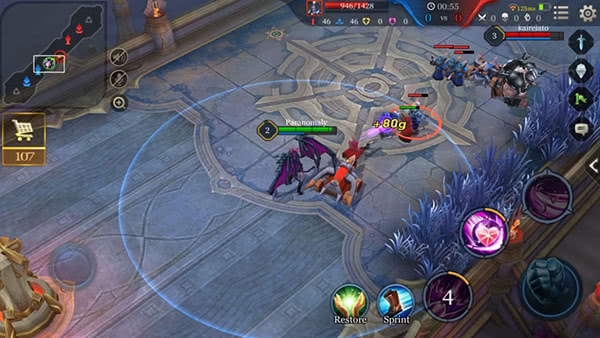 Arena of Valor duels take place on the City of Shadows map. In 1v1 mode, two players face each other in a single lane, without jungle and with only one tower defending their base. Despite these limitations, the Altar of Life is unlocked on this map.

It's a good idea to choose heroes who are strong in melee combat such as Lu Bu, Violet or Taara. There is only one Health cooldown in the center of the map and it is essential to dominate this point if you want to emerge victorious.

This is fastest game mode of the game and is ideal for more experienced players who want to prove their worth.

War of Hooks on the Treasure Bay map 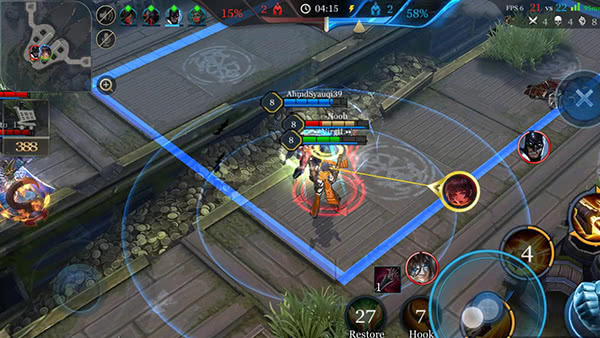 This battle mode is so special that it's only available on the weekend. When playing Hook War, forget what you know about MOBAs, because this mode is completely different from the usual!

Inspired by pirate stories, War of the Hooks has two ships and the objective is to get control of the treasure between these ships. The treasure is surrounded by a rectangular blue “box” and both teams fight to achieve 100% domination of the area, much like the control of several other games.

When a player enters the treasure space, the percentage advances towards the desired 100% and the first team that achieves that goal wins. But if there are heroes from opposing teams in that area, then no one gets points or sees the percentage increase.

And the name hook? Each player receives one new hook-like skill, being able to shoot up to a long distance and, if it hits the target, it is pulled towards the shooter. It is with the hooks that players will fight for the domain of the treasure.

There are no towers, no Altar of Life and much less jungle with monsters on this map. You can only buy items in your base and only if you have died. Most importantly, you don't choose your hero. The Abyssal Conflict hero system is the same as in War of Hooks, i.e. heroes are randomly assigned to players. But as with the other map, here you can also use gems to gain chances to change your character. May the luck be with you!

Audio Video All about Arena of Valor maps and battle modes
All about Paloma do Free Fire (Description, skills and tips) ❯

17 GTA San Andreas mods for Android you have to play!