MARVEL Tournament of Champions is one of the simplest and most challenging fighting games you can play on mobile. Both in offline and online modes, it allows you to gather dozens of heroes and villains from the House of Ideas to fight by your side.

In the midst of so many gameplay possibilities and with several characters to choose from, it's normal for you to have some difficulties at first. To help you, we've prepared 9 tips for you to be the best fighter in the game!

1. Have a fighting strategy 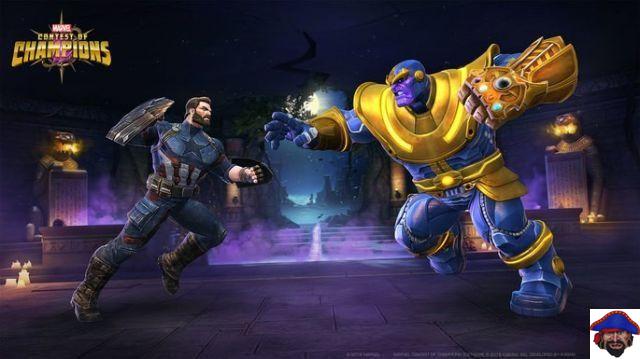 This game has a very simplified fighting mechanics. It is light attack, strong attack, defense, special move and side moves. Still, that doesn't mean you can just finger the screen anyway.

A minimum of strategy is required. The main one, for example, is to use both hands to play. One controls defense, while the other controls offense. This makes your fighter's movements much more fluid.

Another tip is to start the fight already defending yourself. Keep in mind that in Story mode your heroes don't recover health after every fight, unless you use a potion. So it is ideal to minimize the damage you will incur.

Learn to block and evade

To learn to use these skills effectively, you need practice. Therefore, it is important to spend some time training these movements in order to master them. Believe that learning to use blocking and evasion well will make the game much easier for you.

Always be calm and study your opponent's movements. Tournament of Champions is almost a game of chess in that sense.

There's no shame in recognizing when your team of heroes isn't that powerful. Sometimes you may end up not being able to progress in the Campaign, as you will be constantly defeated by the same enemies.


One solution is to repeat all those missions already completed. In fact, the game kind of forces you to do that, since to complete some quests 100% you have to play them at least twice.

Some missions even have side quests. They have a slightly higher level of difficulty, yet they provide some of the best bonuses in offline modes.

3. Know what each crystal in the game is for

If you've already started playing Tournament of Champions, you know that crystals are the most important part of the game. It is through them that you get evolution items, potions, shards for new crystals and, of course, new characters for your collection.

However, not every crystal is the same. It is necessary to pay attention not only to the colors, but also to the formats of each one. This will indicate the type of reward that is coming, as well as its level.

Altogether there are more than fifty different crystals. Throughout your experience in the game you will start to notice the differences between them all and what each one can provide you. However, there are six types that you need to know about before playing or if you are at the very beginning of the game. See the table below! 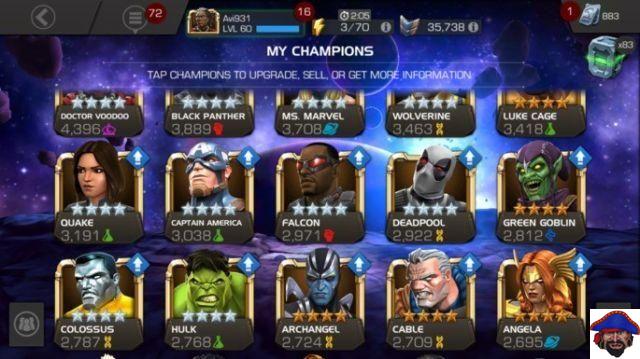 Selling your heroes can be a bad idea for several reasons. You might think this is a good way to earn money or shards, but actually the profit you make isn't that rewarding.

What's more, the Contest of Champions has already made it clear that all hero levels matter. This can be seen in Events and the Arena, where certain tasks can only be accomplished by low star characters.

It's often said that the game's developer rewards those who don't sell their heroes, but rather evolve them. So the more evolved copies of the same character you have, the better.

The four items above are extremely important for your evolution in Contest of Champions. Literally, by the way, since two of them are specifically used to increase the power level of your champions: ISO-8 and gold.

ISO-8 will determine how much experience your hero will gain. There are several types, with those that provide 75 experience points and those that offer 500. They are usually obtained from quest crystals, but can be found on the quest maps themselves.

Gold, also obtained by carrying out various missions and through crystals, is where the payment for the evolution of your characters will come from.

The Tournament of Champions energy system works relatively well. It is only used in quests. Each move given on a map consumes an “x” number of energy. As you progress, the tendency is for your stock to run out.

If this happens, you can ask your Alliance members to give you what you need. You can also buy energy refills.

The smartest way to spend Units is to acquire special abilities in the Collector's Shop. Although you can buy special crystals, the chances of getting 3 or 4 star characters are minimal.

So invest in improving the heroes you already have and buying items like boosters, which will make your life easier in battles.

Once you reach Chapter 2 of Act 1 Story Quests, you can start picking up Event Quests. Every month there will be an event with time-limited missions that grant very good rewards.

So focus on completing these quests before continuing with the normal quests. In all of them there are high chances that you will get at least one 2-star hero.

7. Explore the Arena and online matches

You must invest time in the Arena to do well in the game. In the beginning it is normal to stay in the beginners stage. As you level up and strengthen your team of fighters, you will automatically be able to fight more powerful players.

But the ideal is to take advantage of this beginner phase of online duels to gain experience and confidence. If you've mastered the defensive techniques well, it will be even easier to win prizes on top of newbies and newcomers to the game.

8. Don't underestimate the power of an Alliance

You should try to join an active Alliance, ie: choose one where all players join the game at least once a day. This is critical, as an active group brings prizes to all its members.

If you don't find any, you can create your own alliance, keeping in mind that initially it will be difficult to find people who want to join it. 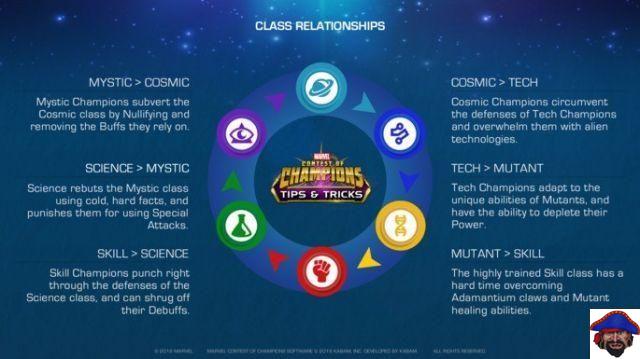 Being a fighting game, you need to have good champions to win. Each hero can belong to one of six categories, with their own special abilities and weaknesses. Since your enemies also have diverse strengths, you shouldn't stick with just a fixed team of heroes.

So see below which classes exist in the game and the respective heroes of each one:

They are those heroes who have been scientifically altered to obtain powers. They have battle bonuses against the Cosmic Class. Currently your heroes are:

This class of heroes comprises all those who came from space or are somehow extraterrestrial. Has an advantage in fights against Tech Class. His heroes and villains currently are:

Skilled ones are those who don't have mutation, technological gadgets or any special powers. They attack and defend using only their combat skills. They are powerful against the Mystic Class. See who belongs to this group below:

Mystics, in turn, are those who have magical or supernatural gifts. They excel in battles against the Cosmic Class. Their fighters are listed below:

All those who have undergone some genetic mutation are in this Class. Mutants are especially strong against Skilled ones. Check out the names currently belonging to the group:

Finally, Technologists are those who depend on some kind of technology to defend themselves and to attack. They are powerful against Mutants. See who belongs to this Class:

Audio Video 9 tips to be the best fighter in MARVEL Tournament of Champions
9 precious tips to get started with everything in Ragnarok Mobile! ❯