83 League of Legends (LoL) slang so you don't miss out!

Like any successful game, League of Legends (LoL) has its own vocabulary used by the community. If you are not familiar with the language of MOBAs and you no longer want to have problems communicating with your partners or opponents in LoLzinho, check below a list of the 83 main slang and expressions of the game for you to understand everything!

Slang and expressions related to the map 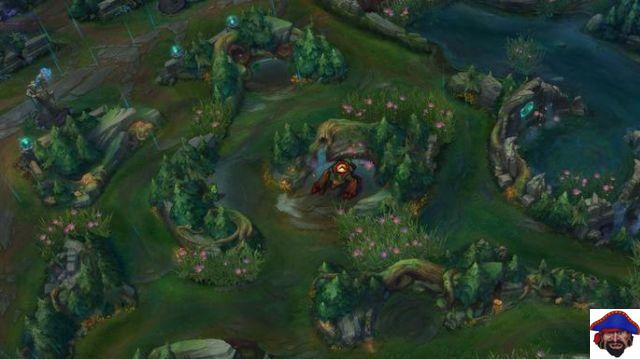 Lane means path, lane or lane. These are the three paths players travel along to reach the enemy base. The lanes are:

Jungle is the forest between the lanes where you can kill monsters to get money and buffs.

Minions are uncontrollable creatures that spawn in your base and advance through lanes towards the enemy base.

Wave is the set of minions that spawn periodically and advance through lanes.

- I'll clean that wave and come back

Fog means "mist". It is the dark part of the map that you have no vision of.

Face Check means "checking with the face". This is when a player enters the Fog without first using skills or any items to reveal the path.

Wards are in-game items capable of providing vision over areas. Wardar, therefore, is the act of using these items or even skills capable of revealing Fog.

Slang and expressions related to combat 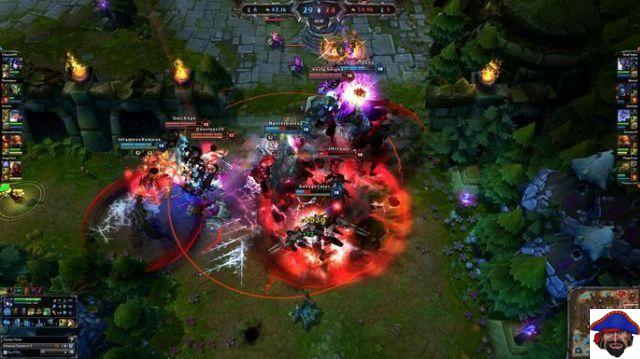 Push means to push or advance. This is when your team advances in a lane, clearing waves and destroying towers.

Gank means ambush or ambush. This is when one or more champions leave their lane to surprise enemies in other lanes.

Split means division or to divide. It's when a team that is gathered separates to attack several points at the same time. A Split Push can also be done by just one player while the rest of the team attacks from the other side.

To start or “engage” means to start a combat. This is when a team coordinates to initiate action. Usually the “start” action is performed by a tank.

The opposite of engage. This is when you or your team run away from ongoing combat.

Dive means diving or diving. It is when a player chases an opponent even when he is under attack by the enemy tower.

Flank means "flank". It is the back of the team or a champion.

Let me take the flank...

TF is the acronym for “team fight”. This is when both teams engage in a fight involving all or most of the players.

Ace or Wipe is when an entire team dies.

Bait means bait. That's when your team mounts some strategy to lure opponents into disadvantageous situations.

Last Hit means "last hit". This is when a champion finishes off a creature or opponent, thus receiving the money, buff, kill, etc.

Farm means to raise. This is when you get money and experience by killing creatures or opponents.

Feed means to feed. This is when a player dies a lot to the opponent, causing them to become stronger.

DPS is the acronym for "damage per second". It is the most used damage measure in the game. It can also designate a champion that deals a lot of damage.

Burst means "burst". It is a large amount of damage dealt in a single hit or in a short period of time.

KDA is the acronym for "kills, deaths and assists". It's your score in the game.

Poke means "to poke". This is when you attack opponents from a safe distance without them being able to immediately counterattack.

Harass means "to molest". It's when you annoy an opponent anywhere on the map, obstructing your game rhythm and your farm.

Juke is an expression created by the North American community of LoL that means "to deceive the opponent". It's when you use skills or movement ambiguously to "dribble" the enemy.

To zone means "to control a zone". It's when you use items or skills to gain control over a part of the map, either to prevent or discourage enemies from entering it.

Shadow means "shadow" and Ghost means "ghost". Being someone's Shadow or Ghost means you'll cover an ally while hiding in the Fog.

Slang and expressions related to champions 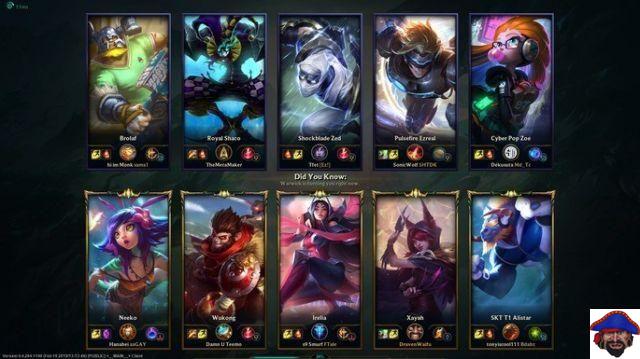 Pick means choice. It is your choice of champion for that particular match.

- Who are you going to pick?

Meta Pick and Meta Ban are, respectively, a champion's pick and ban based on the current metagame. It usually happens when a champion is too strong and gets picked or banished quickly.

Blind means "blind". Shielding is when you "blindly" choose a champion, without thinking about the counters you can take. It usually happens when you already know who you're going to play before you even find a match.

Frontiine and Backline (or Front Lane and Back Lane for some) are champions that are, respectively, in front and behind in fights. Frontlines are generally tanks and other tough champions, while Backlines are more fragile champions that typically deal more damage.

Counter means to fight. A counter is a champion with characteristics suited to fighting another. The expression is also used to designate skills that are used in response to others.

Build means to build. It's the way you assemble your character's abilities and items.

OP is the acronym for overpowered. It's the famous stolen champion. The acronym can also be used for items and abilities.

- This champion is very OP!!

ADC is the acronym for “Attack Damage Carrier”. It is the champion responsible for dealing a lot of damage per second and thus charging the team.

MVP is the acronym for “Most Valuable Player”. He is the most valuable player for the team, which is defined based on the final stats of the match.

Team Comp is the acronym for "team composition". Refers to the overall set of champions chosen by the 5 players.

This Team Comp is horrible...

Power Spike means "power spike". These are moments in the game where your champion gets considerably stronger by leveling up or getting items.

Slang and expressions related to skills 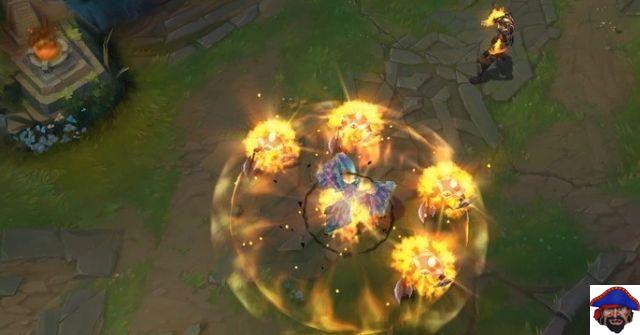 Range means range. It is the distance at which an ability or attack takes effect.

Buff means polishing or polishing. This is when a champion receives some bonus to their stats, either through skills, upgrade patches, or rewards for killing map creatures (like the Blue Buff and Red Buff). Debuff is the opposite of buff. It is any buff that a champion receives to its attributes, such as slow, attack or defense decrease, etc.

- Mordekaiser was heavily buffed in the last patch...

Stun means stun or stun. It is an effect that makes it impossible for someone to walk and use skills for a few seconds.

Silence means silence. It is an effect that makes it impossible for someone to use skills for a few seconds, but still allows movement.

Slow means slow or slow. It is an effect that slows someone's movement or attack speed.

Knock up is the effect caused by skills that send targets into the air for a set time. It is a kind of CC (Crowd Control).

The best translation for Gap Closer is "space shortener". It is any skill in the game that can be used to quickly approach enemies.

Heal means "to heal". It is any skill or item in the game capable of restoring health.

CC is the acronym for crowd control. These are abilities that limit the number of active players in the fight for a few seconds. It includes stuns, silences and any other effect that takes control of the characters.

Stack means "accumulation". It is any in-game item or skill that can apply stacking effects on the opponent, be it buffs or debuffs. Stacking means "to accumulate".

Ult is the acronym for ultimate, which is the last and strongest skill of a champion.

Cooldown is the cooldown of a skill.

Counter means to fight. Any ability used to limit or negate another ability. The expression is also used to define champions that are strong against specific ones.

OP is the acronym for overpowered. It's a very strong skill, possibly unbalanced. The acronym can also be used for items and champions.

Slang and expressions related to players 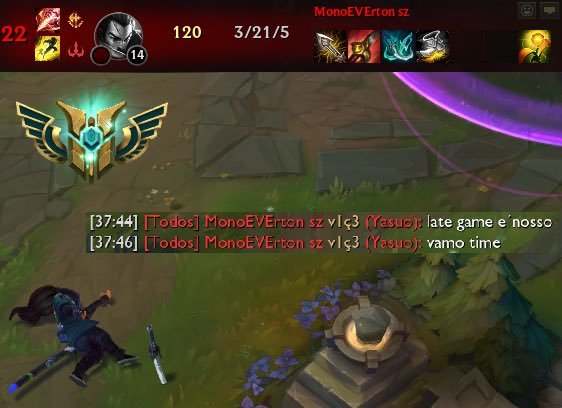 Smufs are experienced players playing on new accounts, that is, against players far below their level.

Trolls are the annoying players that get in the way on purpose, whether it's cursing, not helping in fights, feeding on purpose, etc.

KS is the acronym for "kill stealer" or "kill steal". It's the player who didn't contribute much to the damage, but delivered the final blow that finished the opponent, or just the act of stealing the kill.

Flex is the acronym for "flexible". When a player enters this at the start of the game, it means he is willing to play in any role or lane.

Roaming means "to roam" or "to roam", so Roamer is the player whose role is not to stay in a specific lane, but rather to roam the map looking for openings and gank opportunities.

Other slang and expressions 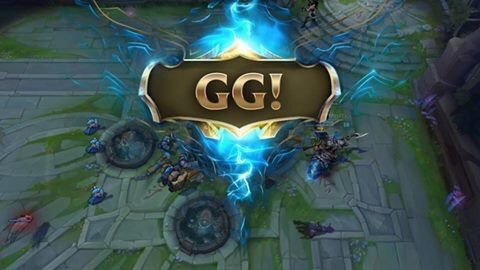 Metagame consists of the current moment of the game. This is when you refer to all the features of the current patch (champions, items, strategies, etc.), to define what is good or not.

The current meta is very boring...

GG is the acronym for "good game". It is used at the end of the game as a greeting to the players. Over time, the acronym became synonymous with "end of match".

GGWP is an extension of the acronym GG. It means "good game, well played", and serves as a compliment and praise to opponents for playing well.

GLHF stands for "good luck, have fun", and is just a polite greeting used at the beginning of games.

FF is the acronym for "Forfeit", which means surrender. It's when a team gives up the match because they believe there is no way to win anymore.

Buff means "to polish". It's when a champion, skill, or creature gets an upgrade that makes it stronger.

Nerf means to weaken. This is when a champion, skill, item, or creature receives an upgrade that makes it weaker.

- Drave deserves a nerf in the next patch...

AFK stands for "away from keyboard". It is when a player is absent from the match for any reason.

Izi is our country's way of saying "easy". The expression is used to provoke opponents by saying that the game is too easy.

Snowball means "snowball". It is when a team takes advantage of a situation to greatly expand its advantage over the rival team.

- So-and-so died so much that he gave rage quit...

add a comment of 83 League of Legends (LoL) slang so you don't miss out!