8 Tips to Improve Your Deck in Yu-Gi-Oh! Duel Links

In Yu-Gi-Oh! Duel Links, the duel starts long before you meet your opponent and making the right choices before the match is even more important than playing well during it.

Deck building is, without a doubt, the most determining point in your success in Duel Links. It's no use being good if you just don't have the cards you need at the right time.

That's why we've selected the 8 best tips for you to build the best deck possible in Yu-Gi-Oh! Duel Links!

1. Keep as few cards as possible

For starters, the most basic and perhaps the most important tip. In Duel Links decks can have 20 to 30 cards. It's crucial that you keep yours at 20 or so. The reason is that in this game, the important thing is to be consistent in your card purchase. The fewer cards your deck has, the more chances you have of drawing the card you need at the right time.

Your deck needs to have a balance between monsters, spell cards, and traps. It is advisable that you keep a ratio: 2:1:1, that is, 2 monsters for every 1 spell and 1 trap. The structure is not mandatory but is often the most successful.

In Duel Links there are three ways to win a match:

Based on that, there are four main ways to achieve these goals:

It's important that your deck prioritizes only one of these victory conditions. If you try to win through two or more, you are very likely to have a hard time. For example, it is not advisable for your deck to aim to win the duel through Effective Damage and depleting your opponent's cards.

The best way to win in Duel Links is to focus on a win condition and come up with a very strong Plan A. If you still have room for other cards, use them in case plan A fails.

4. Give your deck an identity

Once you've defined the victory condition you want to focus on, build your deck around it. For example, if you have a White Dragon with blue eyes, of course you intend to win by Battle Damage, as it is an extremely strong card that can destroy most monsters in the game. Your deck's identity should revolve around this card.


Based on this, ask yourself: which cards will help to summon, protect and assist the monster? Likewise, choose your skill according to the intended strategy.

Most of the time, if a card is good, you should have two or three copies of it in your deck. As mentioned before, in Duel Links, the player who has the most consistency in drawing cards wins, and this is achieved by increasing your chances of drawing the right card at the right time.

Obviously, you can't fill your deck with repeat cards because you have to be prepared for a lot of different situations. Just try to reduce the “luck” factor as much as possible.

Another way to increase the consistency of your strategies is to decrease the use of situational cards, that is, those that require several different conditions to come into play. You may lose the match while waiting for the chance to execute your plan.

6. Don't get attached to bad cards

In Duel Links, it is strangely common for many players to keep bad cards in their deck without noticing that they are not contributing effectively, either because they want to be faithful to the design or because of experiences from other games.


Stop to analyze the deck regularly and try to identify weaknesses, as every deck has one. Returning to the deck White Dragon with blue eyes, for example, the weakness is being able to summon the monster, since it requires two tributes. In that case, he removes cards that don't contribute to the strategy and inserts cards that make his summoning easier.

7. Adapt to the metagame and prepare to win the majority

Modify your deck according to the current metagame. Recognize which decks and strategies are being used the most by players and play accordingly. That way, the result will be a deck that is prepared to win most matches, rather than a deck built to fight just one strategy. 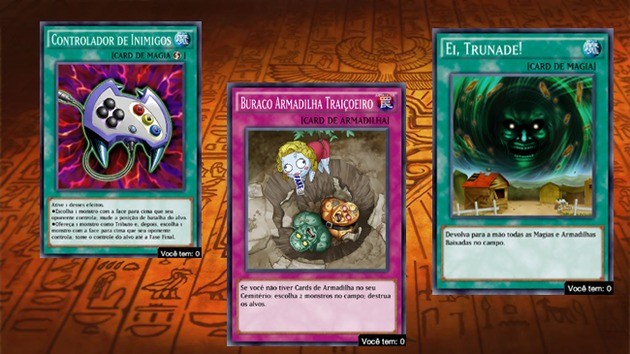 If your strategy is established and there are still spaces left for cards, try to fill them with wild cards, that is, versatile cards that can be used in numerous situations. Some good examples of wild cards are Etaqua typhoon, Enemy Controller, mirrored wall e Kuriboh sphere.

Audio Video 8 Tips to Improve Your Deck in Yu-Gi-Oh! Duel Links
8 precious Teamfight Tactics tips to get to victory! ❯

add a comment of 8 Tips to Improve Your Deck in Yu-Gi-Oh! Duel Links