Harry Potter: Hogwarts Mystery is the first RPG built around the world created by JK Rowling. It's a fan service that all lovers of the wizard's books and movies have been waiting for a long time. Best of all, it's a completely free game and available for Android and iOS. The only problem is that it's not such a simple game to progress.

Patience and sometimes money is what you need to keep evolving in the Hogwarts Mystery narrative. If you have the first but don't have the second, we can help. We have prepared some simple tips to make your days at the biggest witch school in the world a fun experience.

1. Accept that the energies run out

Yes, we know that Hogwarts Mystery's energy system greatly complicates the experience. Pretty much everything you do requires spending your energy pellets. Normally a complete mission, depending on its importance, will already consume almost all your reserve. The worst is when this happens in the middle of a class!

The secret, however, is not to get frustrated and not to despair. That's the system and there's not much you can do about it. Wait for your reserve to fill up again and take a break from the game. Put down your cell phone, go read a book, have a snack. The producers' idea is that Hogwarts Mystery was really a hobby-style game.

How to gain more energy?

On average it takes 100 minutes, just over an hour and a half to recover your energy points. For some it's a long time, so the game allows you to acquire extra marbles.

One of the ways to get more energy is to finish exercises and classes. Sometimes, unfortunately not always, there is the option to choose extra energy as a reward. This is perhaps the hardest way, so don't count on her too much.

A second option is to interact with certain points of interest scattered around the castle. See what they are below:

Is it possible to increase the maximum power limit?

In your first year at Hogwarts it is possible to increase your energy cap by three points. This is possible by taking flight lessons. That's why it's a good idea to prioritize these classes over the main quests at first.

Wizards' money has only one purpose in Hogwarts Mystery, which is to buy clothes and other items for your character. It is with the coins and the rare gems that you customize your wizard or witch with very exclusive things. Although some specific clothes and accessories provide stat points, it is best not to focus on earning money as a reward.

There are many ways to earn coins in the game, but stat points not so much. They are mostly provided when you complete the classes. Each teacher grants you a unique type of attribute, which can be courage, wisdom ou Empathy. Having high levels of these points is important to unlock dialogue options that will be most useful to you.

We point out, however, that the more advanced years at Hogwarts make the mission of earning these points more difficult. As you will have accumulated good money, you will be able to buy outfits that will boost your attributes.

3. Understand the dynamics of duels 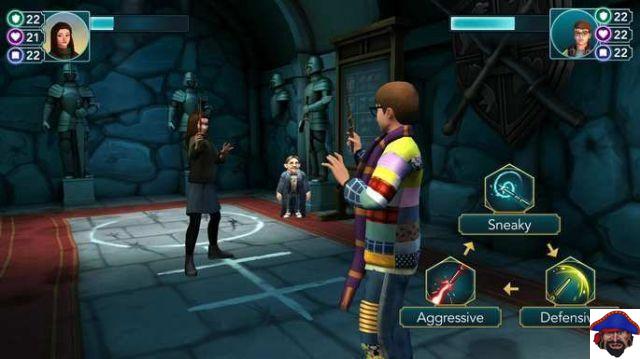 One of the most fun parts of Harry Potter: Hogwarts Mystery is dueling. The system created for the game is simple, not as challenging as it could be, but still pretty cool. It is divided into two parts: the first is a "rock, paper and scissors". Whoever wins this part can then take an action.

In the first part you will have to choose between Aggressive, Defensive and Sneaky. Pay close attention here. If you choose Aggressive, you will beat Sneaky, but you will lose to Defensive. Sneaky positions beat defensive positions and lose to aggressive ones. Understanding this dynamic is essential.

Ben will almost always be defensive, while Merula will often adopt aggressive or sneaky positions. But this will not always be so. So pay attention to how the duelist behaves in that particular duel. Clashes do not resolve in one or two moves. In fact, sometimes they take time precisely because the duelists are studying each other.

Duel calmly and always try to predict the opponent's moves. It's the best way to become the winner in the first part of the duel.

The action part is the easiest. Your attitude will be related to the position you chose in the first section of the duel. To understand what is possible, see below:

4. The time you play matters

Many missions have a tolerance of up to 8 hours to complete. In addition to yielding better rewards, they allow you time to recover your energy. In this regard, it is important that you choose the right times to play these missions.

Think about what your day to day is like. Try to plan the game so that in these 8 hours of the mission you can play every hour and a half. Since this is the time it takes more or less to fill your energy bar, in 8 hours of mission you can finish it with maximum success.

5. Be smart to win the House Cup 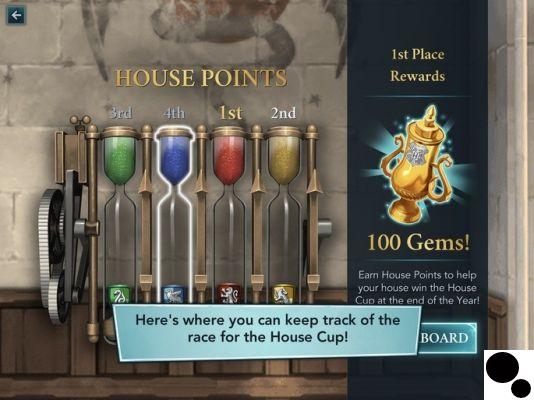 It's not enough to be a good student to win the House Cup in Harry Potter: Hogwarts Mystery. Of course getting all the questions right, doing the right spell movements in class is essential, but it's not enough. More needs to be done to ensure your home is the winner at the end of the year.

There are two important things you need to do in this regard. The first requires patience, as it will require an expenditure of energy points. But if possible, go to the classes you've already attended several times. Repeat lessons as often as you can, as they award points.

Another thing is to pay attention to the dialogue choices. Choosing the right answer depends on what you want. If you want points, choose the answer that matches the house the Sorting Hat has placed you on. Discover her most outstanding traits.

Slytherin, for example, has to do with ambition and cleverness. Griffyndor It is boldness and bravery. Hufflepuff stands for loyalty and friendship. Already Ravenclaw it is intelligence and wit. You won't want to miss out on winning the Cup, as you'll receive at least 100 gems if you do.

6. Learn to focus in class

Missing a focus challenge in Hogwarts Mystery makes the professor angry and misses the chance to earn more points for his house. Those who are hasty often end up making mistakes at that moment, getting frustrated and a chain reaction of errors.

7. Keep an eye out for special events 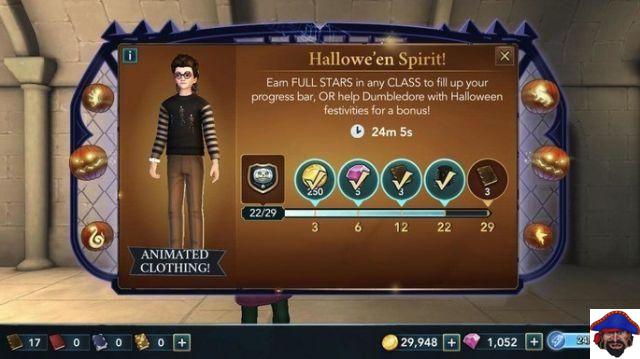 Another fun point about Harry Potter: Hogwarts Mystery is that the game almost always has some special event going on. There have already been events for Valentine's Day, Halloween, Christmas and Easter. In addition to the seasonal ones, there are other more differentiated ones, some specifically aimed at the game's narrative.

Pay close attention to these events as they allow you to win unique items and prizes. You usually have to do some specific missions, which usually earn good points for your house.