SimCity BuildIt is one of the most popular simulators for smartphones. It lets you take on the role of Mayor of a city, with a mission to build it from scratch. For this, it is necessary to manage the most diverse services and buildings, in addition to increasing the population of the metropolis and making all citizens happy and with their needs met.

Doing so, however, may not be that simple. If you are having some difficulties in this game, we can help you. We bring you 10 tips to have a super developed city, with happy inhabitants and who pay the highest taxes for you. 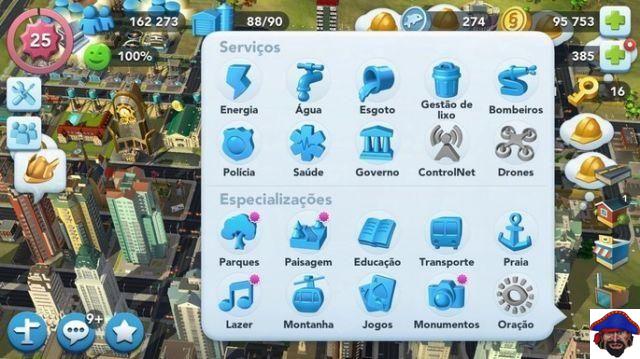 Public services in SimCity BuildIt are indispensable for the evolution of the city. Providing water, energy, sewage treatment and waste treatment is the basics you must do to have a happy population. Subsequently, requests from firefighters, police and hospitals will still need to be dealt with. Dealing with all this costs a lot of money, but mostly strategy.

Public services are divided into two types. The easiest to manage is the one that takes into account the number of families in the city, that is, how many houses you have built. The second is more complicated to manage, as it uses the size of areas that a given building, such as a hospital, can handle. See below for tips for managing each type.

Services that use number of families in the city

Energy and water supply, as well as garbage and sewage treatment, take into account the number of houses built. Within each of these services are buildings, each providing the service to an "x" number of people.

A water tank, for example, will supply water to 8 houses. If you build 9 dwellings, you will need at least one more water tank. The same goes for a hydroelectric power plant, which supplies energy to several houses, but is polluting and cannot be located near the dwellings. On the other hand, wind energy does not pollute, but more weathervanes are needed for the entire population to be served.

All clean constructions are obviously more expensive. It is necessary to have a strategy to not have a greater demand than you can meet. This will cause citizens to leave your city.

Services that use the physical area size

The basic services that use the size of the city's physical area to serve citizens are fire, police and hospitals. Those are more difficult to manage. It is necessary to think about the construction and layout of your dwellings so that none of them are outside the areas served by these buildings.

There are buildings that serve an 8x8 area, as well as those that serve a 12x12 area. So think carefully before you start building houses anyway. You will end up not serving all the inhabitants, which will cause them to leave your city.

Many beginner players make the mistake of thinking that the ideal is to build several houses at the same time. First of all it will just fill your city with building spaces that won't necessarily be built. Most of the time you will not have the materials needed to build the dwelling.

Another fact is that the more evolved the houses, the more inhabitants they bring to the city. This without increasing demand for any of the services. That's why it's always best to build in a region and try to evolve the houses in that region as much as possible before building more homes.

3. Rearrange the city whenever you need

One of the features of SimCity BuildIt is being able to reorganize the city almost 100% whenever necessary. Best of all, you rarely need to pay extra for it.


If you want to relocate buildings, factories, shops, services, just enter the game's edit mode. With roads this can be a little more complicated. If you have evolved the city's roads and you want to eliminate some of its parts, you will have to redo it from scratch, in addition to not recovering the money invested in its evolution.

You can still get a small amount of money by taking out buildings like factories. Factories and other buildings can still be stored in a warehouse for later use if you see fit. In any case, all polluting buildings must always be placed away from dwellings.

The factories are the foundation of the city's evolution. They make the raw materials for the first evolutions of their homes. Then they become the basis for other materials that will also be used in the housing upgrade.

Keeping them at full steam is essential, as this way you ensure you always have the items you need in the Municipal Depot. Wood and iron, for example, are two commonly used items that you can never do without.

5. Increase the space of the Municipal Deposit

The Municipal Deposit is where all your items are kept. From the simplest raw materials to the rarest items, such as those used to unlock the mountain and beach regions. As you can imagine, it's easy to get a full tank in a very short time.

There are three special items used to upgrade the Depot. They are usually obtained when you click on the inhabitant interaction balloons. They can be obtained by watching promotional videos or they can be purchased at the sale markets in other cities.


Be aware of this, as a "stuck" Municipal Deposit will certainly harm the evolution of your city. 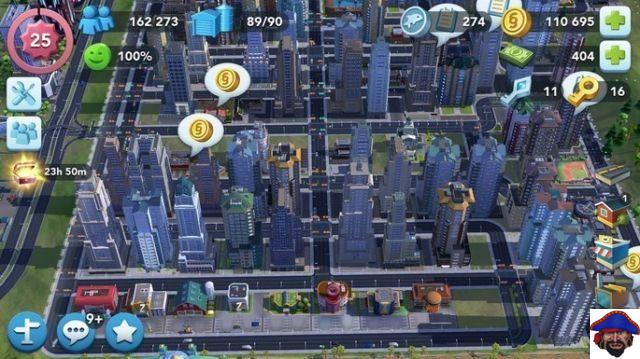 Usually the speech bubbles of the inhabitants say funny things, make some demand or praise the work of the Mayor. Sometimes when you click on them, regardless of their written content, you get special items. This interaction is important, as it facilitates access to rare and hard-to-find objects.

In the same way, there are specific balloons in which the inhabitants ask you to sell some items stored in the Municipal Depot. This always generates coins. If they are common items, the profit is minimal, and sometimes the sale ends up not being worth it.

Either way, all these interactions count towards earning SimCash at City Hall. For each "x" balloons clicked you will win this award.

Many smartphone games these days have the option to watch promotional videos to earn free items. SimCity BuildIt brought this possibility, and it is quite useful.

This is the fastest way to earn SimCash, for example, or items that will allow you to unlock new regions in your city. Don't overlook this. Videos typically last between 30 and 50 seconds, although there are some that last less. It doesn't interfere with your gameplay and still gives you good rewards.

8. Open new regions in the city

At first there is very little room to build in SimCity BuildIt. As you progress through the game, you'll notice that there are two new regions that can be opened: the beach and the mountain. They allow you to build specialty buildings, which can increase the population of nearby houses by up to 20%.

In the same way, you will eventually have to expand the city, increasing its useful areas. All of this is only possible using very specific items. They can be acquired by watching promotional videos, clicking on inhabitant interaction balloons, or by purchasing from other players' retail outlets.

Right at the beginning you will be taught to visit other cities through the commercial center or sales and purchase point. Every city has one. In yours you will sell items for other online players to buy. In the others you will buy items that are available according to your game level.

It is important to say that visiting foreign cities has another advantage. Quite often there is an interaction balloon in the neighboring city. It has a picture of a gift box. If you click on it you will get a random item. It could be an iron or it could be a rare item to expand the city.

10. Participate in the Club, Wars and Mayor's Contests 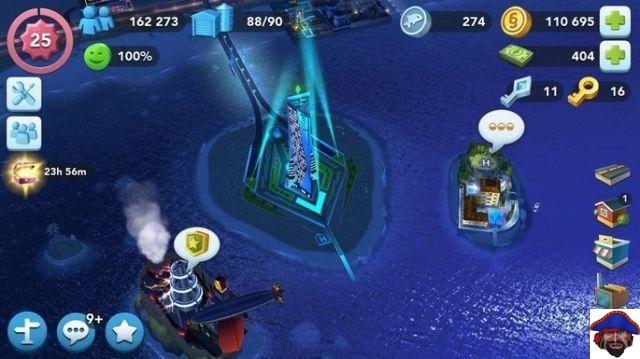 Mayors have access to very specific buildings, which are located at sea. They are specific to online interaction, which is completely non-mandatory. However, we recommend that you invest some time in this, as the payouts can be very high.

When you reach level 18 you will have access to the Club. The Club is the social interaction of the game. You can create your own group of up to 25 players or you can request to join an existing one. Once inside, you can request and send resources, ask for tips or simply chat with other players.

Not every Club participates in the Wars. If you have joined one that participates, you can, from General Vu's Fortress Island, launch disasters on the cities of an enemy Mayors Club. You need to collect attack upgrade cards, as well as items, war shipments, which are needed to attack.

At the end of the conflict period, the winning Club gains spoils of war. These loot are split among the party members who participated in the raids.

This is SimCity BuildIt's most fun and profitable online activity. You participate in weekly competitions, in which you must carry out specific activities in your city. For example: produce 50 wood and collect them in 15 minutes. The more difficult the task, the more Plumbob points it gives.

Each competition lasts five days. You will compete against 100 other randomly selected Mayors from around the world. The greater the amount of Plumbob Points at the end, the greater your prize pool. You can earn Gold Keys, Platinum Keys, Coins, SimCash and Gold Tickets. Tickets are used to buy more tasks if yours runs out.