10 modern houses to build in Minecraft! 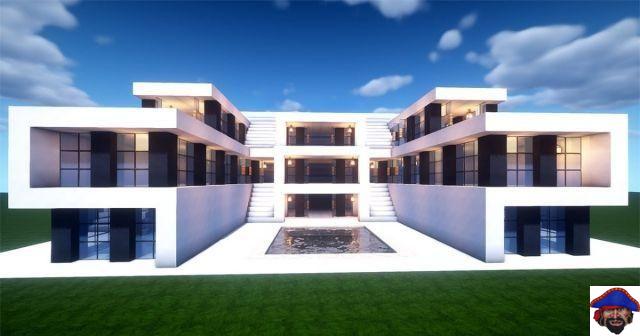 Building modern houses in Minecraft takes creativity and patience. In this article we bring you 10 detailed video tutorials that will make your life easier and allow you to have a spectacular home!

This mansion is truly a spectacle. There are 2 floors in sight, with a huge suite on the top. On the first floor you have a giant TV screen, fireplace, open space kitchen and many other modern and characterful features. And it has a spectacular view of the water and the sunset.

But wait, there's more! Upstairs there's a terrace, the bedroom, with a great-sized aquarium in the center of it all. And the bonus is the basement, where you have a professional movie theater, to invite all your friends!

2. House on the water

This modern house is so modern that it floats on water. To enter it, you must cross a small bridge over a pond. Inside, the details are all designed in black and white, from the walls to the furniture. In the center of the dining room is a skylight in the ceiling, which lets in natural light.

It is not very spacious, but it has a kitchen with two stoves, a very large bedroom, with modern paintings and a very rich decoration.

Random Steve Guy surprises by making a house stuck in the rocks of an abyss. It is not very big, but it stands out precisely for its location and because its windows have a waterfall constantly falling on them. Crazy, no?

Inside it is a little dark, gloomy, but very cozy. It has a very cool color game and has a room that reminds a lot of a big safe!

Have you ever imagined a modern Japanese house, with all the beauty and simplicity of Japanese homes, but with a rich and refined touch of contemporary architecture? Then this is the perfect home for you! It even has a large cherry tree in the inner courtyard!

5. Modern house in the middle of nature

Just because you live at the base of a mountain, in the middle of a forest, doesn't mean you can't afford a magnificent, modern home. This example of a 1-story building features a bedroom, a large living room, a kitchen and a beautiful view of the water. A paradise!

This house is one of the most spectacular on the list. It has 2 huge floors, the most striking being the open terrace, which is very reminiscent of a luxury hotel. It has a swimming pool, barbecue, sun loungers and lots of open space. Inside are two bedrooms, a huge living room and kitchen.

Okay, this house sucks. First, it is located in the middle of a beautiful green valley. After that, there are practically 3 floors, with a terrace and external green space and an open garage for at least two cars. Inside there is a refined decoration in all rooms. It takes work, but it looks wonderful!


Not every modern home needs to be giant. This construction proves that you can have a modern space inside and out without spending a lot of material and without wasting a lot of time. It's made in a container style. It has a small garage, living room and kitchen downstairs and a bedroom with a small balcony.

Minecraft: How to Build a Large Modern House Tutorial (Easy)

A two-storey house with a terrace on the upper floor, large open windows and lots of light. The highlight here is the presence of two swimming pools. One is right at the entrance to the house, while the other is more interior.

To finish, let's go with the most modern possible. This moon-shaped house is so cute. The hardest thing here is to make the external format. Then it gets easier, and you fill the interior with a more rustic decoration, to break the strangeness of the shape a little.

add a comment of 10 modern houses to build in Minecraft!