10 Facts about the Nemesis from Resident Evil 3

Survival horror aficionados will fondly remember Resident Evil 3 as perhaps the scariest among the first trilogy of Capcom's beloved horror franchise. After all, this Resident Evil title diverges from the first two games with two distinct factors. First, Jill Valentine faces the horrors of the zombie outbreak in Raccoon City alone. Second, she has a way of finding a city while the game's main boss – Nemesis – relentlessly stalks her.

As such, players didn't just roam around Raccoon City with RE3's fixed camera angles. Instead, they need to stay on top of themselves, as Nemesis can walk out of almost any door at any time. Unlike the first two games, Jill Valentine is constantly on the run. However, Nemesis hides far more than his burly figure and signature phrase would have players believe. What other secrets does Nemesis hide?

10. A Clone With Augments 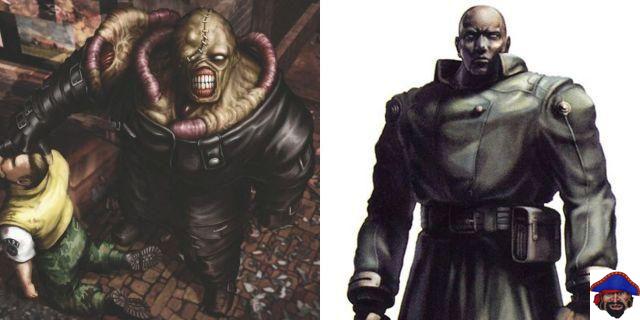 Players who've been through the first three Resident Evil games might wonder why Nemesis and Mr. T had similar appearances - from the black jumpsuit to their burly appearance. In the game's lore, the similarities are actually rooted in the fact that the Nemesis T-Type serves as a clone of the model T-103 Tyrant - which Mr. T is also a part of.

In turn, Nemesis possesses the basic abilities of a T-103. This includes superhuman durability, stamina, and even regeneration. However, while a conventional T-103 Tyrant had limited intelligence, the T-Type Nemesis received power-ups from the Nemesis-Alpha parasite. 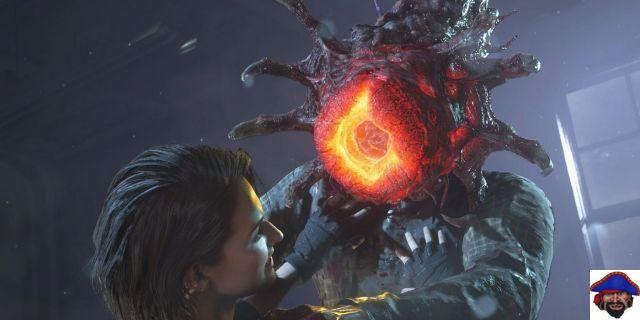 Interestingly, the Nemesis T-Type was formed from a “competition” between two international teams – Umbrella North America and Umbrella Europe. In keeping with tradition, the two teams at Umbrella had to come up with a practical application for the Tyrant Virus. While the North American team created the Tyrant bioweapon, the Europe team created the Nemesis-Alpha parasite based on the Las Plagas legend of Spain.


According to Umbrella Europe, Nemesis-Alpha became the team's answer to the severe mental degradation and brain damage that resulted from T-Virus infections. With Nemesis-Alpha, hosts not only display human intelligence, but also self-awareness. This parasitism explains the Nemesis T-Type's ability to wield weapons or even pursue objectives. 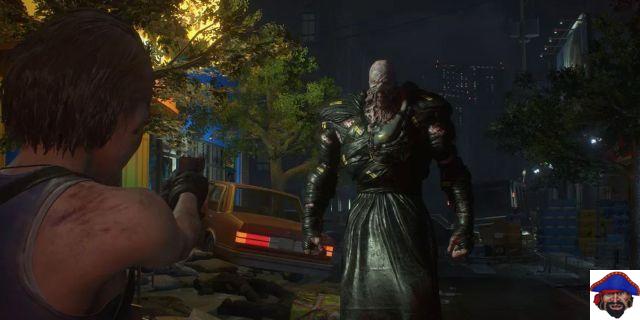 Given the Umbrella Corporation's unhealthy opinion of practicality, they used Raccoon City's ongoing outbreak to deploy and test their newly created Tyrants. Essentially, Umbrella wanted to find out the viability of their BOWs. The T-Type Nemesis eventually fit the criteria for deployment, and the STARS members who remained in the city became its new targets.

According to Umbrella Corporation logic, STARS members made sense as targets due to their knowledge of Umbrella's bioterrorism research. Additionally, the Nemesis T-Type's quest has become a way of determining its ability to recognize targets and pursue objectives. In this regard, the Nemesis T-Type deployed to Raccoon City has earned the name "The Pursuer". 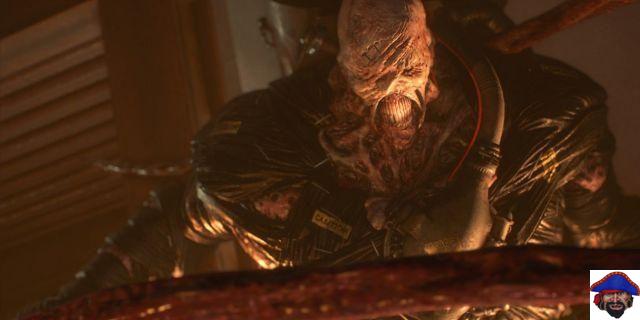 As mentioned, Nemesis remains a special boss for Resident Evil fans due to its three main forms. However, appearances differ in the second and third forms depending on the game in question. For example, the original RE3 simply had a topless Nemesis in its second form and a monstrous beast in its third.

However, in The Umbrella Chronicles, Nemesis' second form will have an inflated upper body. In this iteration, his ribcage becomes visible and spikes now appear on his body. Lastly, in the Remake, even Nemesis Type 1 will inflate its upper body and have a tentacle arm when damaged enough. This tidbit can serve as a reference to his Type 2 and Type 3 forms. Also, the Remake forms had more visual differences. 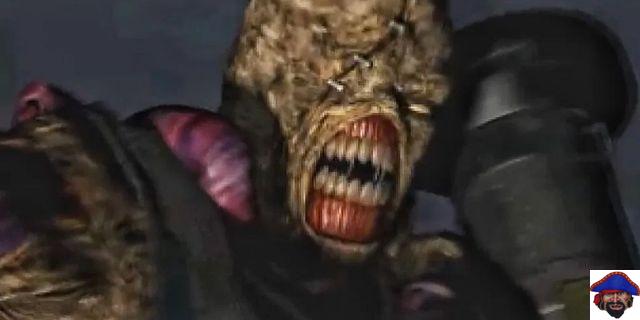 Despite the Nemesis T-Type's dominant appearance, the main theme of Nemesis' design seems to revolve around the idea of ​​restriction and pain. For example, Nemesis from RE3 had a waterproof cape that largely concealed his body, except for his hideous face. Nemesis takes off her coat during her second transformation, this time more unhinged and free. However, his original third form had Nemesis clinging to the ceiling like a large four-legged animal.

At each level, Nemesis appears more mutilated and grotesque than usual. Yoshinori Matsushita, who designed Nemesis for the original game, said that Nemesis' third form, in particular, reflects the Tyrant's suffering - as his transformation means mutilating his original body.

5. Remake: A Tyrant in Restraint 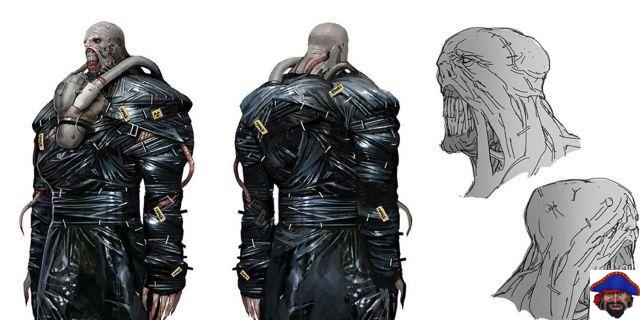 When Capcom released the RE3 Remake in 2020, its design team took a different approach towards the Tyrant star. Yonghee Cho, the art director for the Remake, wanted to keep the original look and feel that Nemesis had in the original game. However, they also had to consider some elements. For example, a Tyrant with clothes seems difficult to be considered "realistic". Also, considering that the Tyrant or Mr. T in Resident Evil 2 already had a coat that hid his body, how can the team make Nemesis unique?

Interestingly, the answer fell on a recurring design reason: moderation. In the Remake, tradition declares the Nemesis T-Type to be a prototype and not a finished model. As such, the aesthetic chosen for Nemesis reflected the “guinea pig” theme. In turn, the somewhat "stitched" appearance of Nemesis' black "coat" actually serves as a temporary seal. After all, Jill also encountered the second and third worst and most unstable forms of Nemesis once her "coat" was removed.


4. Defeated by a Railgun 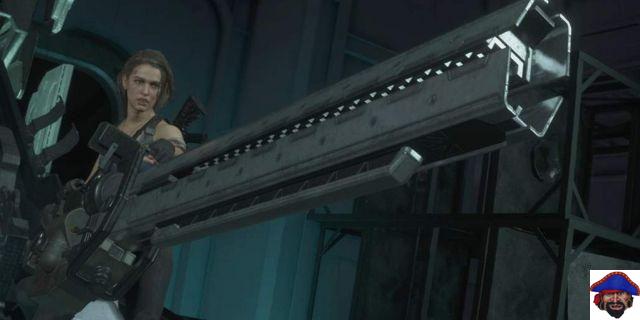 Interestingly, the main incarnations of the Nemesis T-Type will always meet their end at the hands of a next-gen railgun. However, the railguns that Jill used to damage (in RE3: Nemesis) and destroy (in Remake) Nemesis differed in their backstories. In the original game, the US Army designed the Sword of Paracelsus as an experimental cannon in their attempt to recover the G-Virus. In this regard, the Sword served as their “insurance” in case another Tyrant-type bioweapon appeared.

However, in the remake, Jill used something called a Next Generation Rail Cannon (FINGeR) with use of ferromagnetic infantry. As with the sword, the US military also created FINGeR. However, this time, the US Armed Forces simply wanted to use FINGeR against any sort of horrible bioweapon, not particularly just Umbrella's. 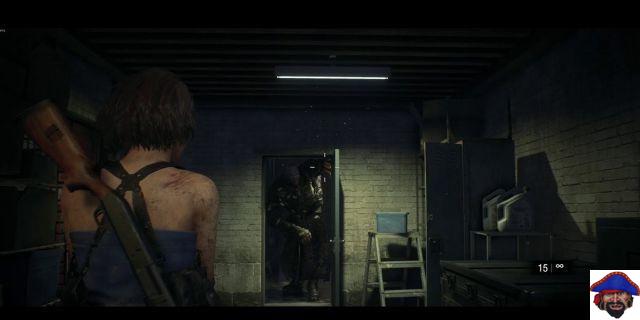 Of all the creatures at the start of the Resident Evil trilogy, it's the T-Type Nemesis that just relentlessly stalks the player throughout the game. Except for Save Rooms, Nemesis can chase players from one area to another. Also, except for the three encounters where players have to fight Nemesis, players have eight other encounters where they can either flee or temporarily take down Nemesis.

Given the scarcity of bullets in the game, the latter may not be a recommended option for players. However, if they try to escape Nemesis, the game will request a special “chasing song” where Nemesis can appear anytime and anywhere. It's when the song ends that players can safely roam the city again. 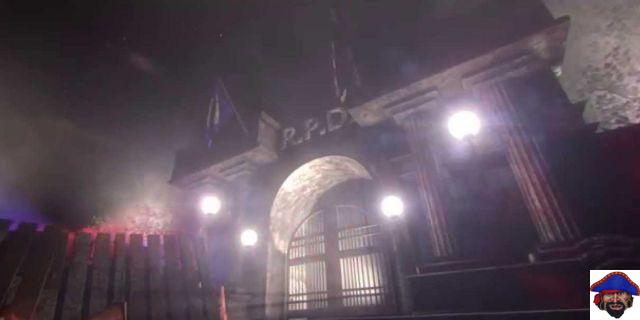 Fans know that Nemesis stands best as the boss of any Resident Evil scenario that takes place inside Raccoon City. However, the modern Nemesis actually makes an appearance as early as the Resident Evil 2 public demo. In the Resident Evil 2 RPD Demo, fans heading to the graveyard outside the Raccoon Police Department can hear a familiar phrase echoing. at a distance.

When they listen, they discover Nemesis howling the iconic "STARS!" dialogue just beyond that wall. Given that Capcom had no comment on a RE3 Remake until the time of the demo's release in January 2020, the subtle participation gave a chilling impact to fans eager to wait for Nemesis' reappearance. 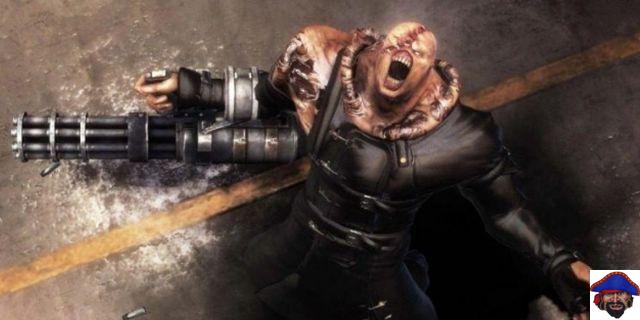 Interestingly, fans who want more information about the Nemesis T-Type can take a look at China's Gameplayers Magazine. Back in the heyday of Resident Evil 3: Nemesis, the publication released the “Biohazard 3: Last Escape Complete Domination Official Guidebook.” In this guide, a “Nemesis Report” contained non-canonical reports about Nemesis.

However, the report mentioned some items based on the lore of the time. For example, Birkin's research on obedient Tyrants (the T-002 model and the NE-Alpha parasite) led to the T-Type Nemesis. Furthermore, Nemesis had three main “forms”. Unfortunately, errors in descriptions start showing up in more specific statements – like the Nemesis' internal biology.

Audio Video 10 Facts about the Nemesis from Resident Evil 3
10 Minecraft house ideas to inspire you! ❯