Due to her expertise with bioweapons and bioterrorism threats, Jill becomes one of the most formidable protagonists in the entire franchise. Furthermore, her skirmishes against the powerful Bio-Organic Weapon (BOW) Nemesis proved just how incredible Jill's survival skills were if put to the test. However, what else can fans clean up from Jill Valentine? 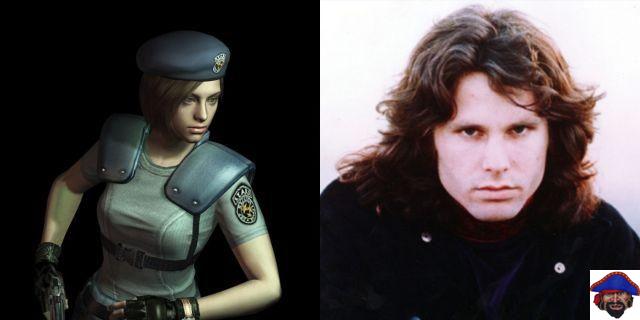 Interestingly, one of the most interesting aspects of Jill's origins may have something to do with her namesake. Her original name "Jill Morrison" served as a reference to Jim Morrison, a member of the band The Doors. However, Capcom eventually changed its name to "Jill Valentine", referring to Robert John Valentine, who ran the Chiba Lotte Marines baseball team.

It's interesting to note that almost every character in Resident Evil has references to actors, movies, and even music. For the first two games in particular, the characters seem to have some slight references to the music and the movie, as reflected by Jill Valentine and The Doors in Claire Redfield's jacket with a reference to Queen. 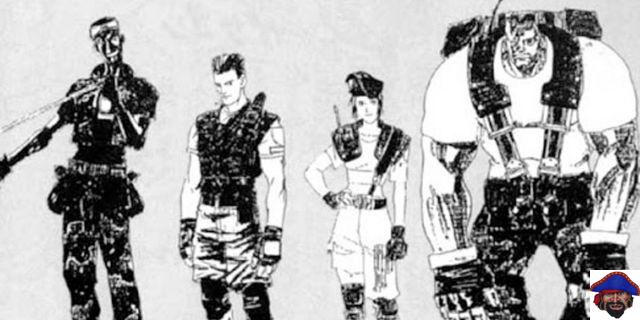 When the Capcom team planned the original Resident Evil release, Jill really got a ton of design changes. The first iteration of Jill was courtesy of Capcom artist Isao Oishi. In this draft, Jill was given the name “Jill Morrison” and even had several backstories. For example, one version claimed that Jill was a survivor of a plane crash. Meanwhile, another story saw her receive cybernetic enhancements as part of a special forces team.

Also, in the original Resident Evil plans, Jill would start first as one of four (!) playable characters. Another review would have downgraded her to "Beam", Chris Redfield's supporting character. 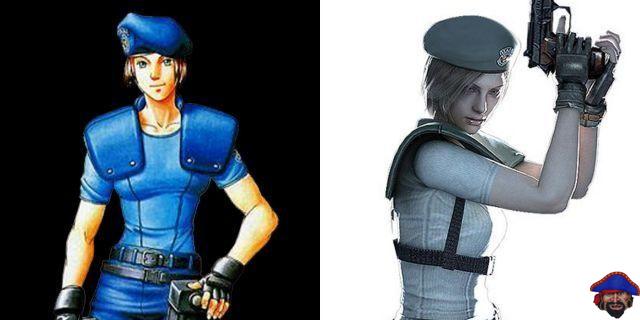 By the time Kenichi Iwao took over the RE story, his draft called for a more toned down and realistic nature of the STARS unit. In turn, Jill became a former Delta Force soldier who now serves as a member of an elite police team unit. In this final draft, Jill specializes in counterterrorism.

However, Oishi did not like the “same” design of military uniforms. As such, Oishi's design for the "most realistic" police force still had everyone sticking to individual themes. As such, Jill wore her signature beret and shoulder pads. 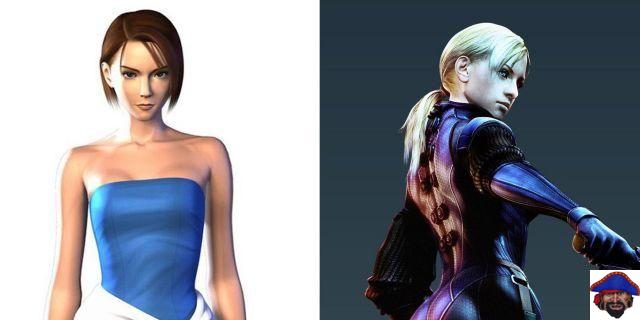 Among protagonists who gained new costume designs in future games, Jill remained consistent with her blue motif. In Resident Evil 3, Jill's military outfit is largely replaced by a blue blouse - but it's still blue. Her appearances in subsequent games also emphasized the blue suit equipped with tactical gear.

However, some of Jill's new outfits also required thematic changes. For example, Kenichiro Yoshimura's design for Jill in the Resident Evil Remake called for a more uniform take on the STARS uniform. In this case, Jill wore a uniform that still had her shoulder pads and berets - but now had a darker color similar to her companions, signifying the dark nature of her mission at the mansion. Jill is also given a darker "tactical uniform" for her time under Wesker's control in Resident Evil 5.

6. The Fight Against Bioterror 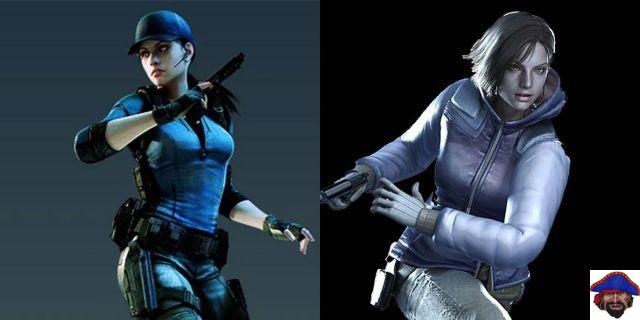 Interestingly, Jill resumes fighting the Umbrella Corporation after the Raccoon City Destruction Incident. She and Chris join the Private Biohazard Service, which has served as an international civilian counter-bioterrorism effort. In 2003, one of their missions took Jill and Chris to the Greater Caucasus area to investigate an outbreak similar to the Arklays. They eventually encounter rogue STARS member Albert Wesker and an enhanced Tyrant named TALOS. The duo's efforts eventually led to the destruction of Umbrella's facilities in the area and the eventual downfall of the Umbrella Corporation as a whole.

Meanwhile, Jill and Chris formed the BSAA, which eventually had a more proactive effort to thwart active bioterrorism threats. It was thanks to the BSAA that Chris ended up resolving the Kijuju crisis and other more recent threats.

5. Only One To Turn To Villainy 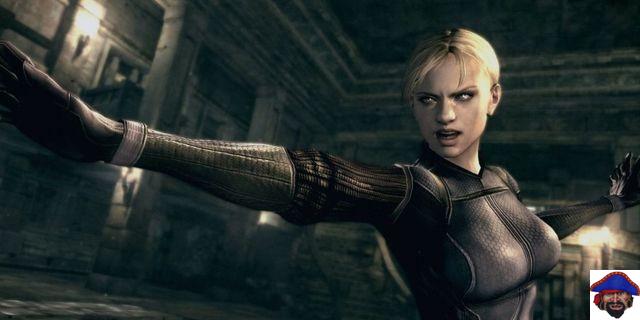 While the series' protagonists have maintained a firm grip on their desire to end bioterrorism threats around the world, Jill serves as the only protagonist to be given Tyrants-like physiology - albeit as a villain under Albert Wesker's control.

After Jill "died" with Wesker in their fatal encounter at Spencer Manor, Wesker did indeed survive and kept Jill in stasis at a Tricell facility in Kijuju. Experiments with the Uroboros virus kept Jill under Wesker's control - with Jill even fighting Chris with her newfound abilities. While Chris ended up saving Jill from Wesker's clutches, Jill still holds the record for being the only female lead to have a direct antagonistic role.


During Jill and Chris' invasion of the Spencer Estate, an unfortunate encounter with Wesker resulted in Jill and the antagonist falling off a cliff. Wesker survived the fall thanks to his physiology, while his people at Tricell Inc. kept Jill alive and implanted the Uroboros virus in her. Jill became Wesker's soldier for much of Chris' mission in Kijuju.

4. It May Be The Key To Immunity 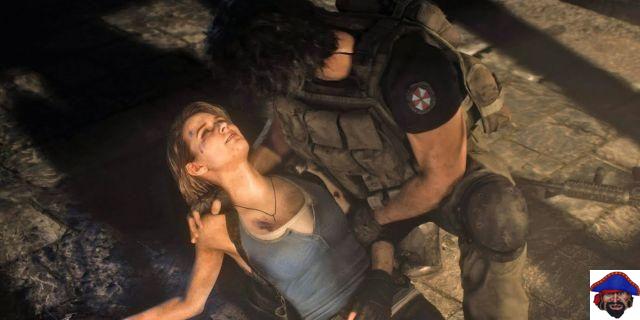 As fans may remember, Jill Valentine had a little grip due to her interactions with various viruses. During her ordeal in Raccoon City, the T-Virus found its way into Jill's system. It was thanks to Carlos Oliveira's efforts that Jill got the cure for the virus. Wesker will use Jill's newfound "immunity" to make her a test subject for the Uroboros virus, turning Jill into a superhuman agent under Wesker's control.

After Chris and Sheva Alomar saved Jill, Jill found herself in rehab to get rid of the virus completely. However, Jill remains out of order at the moment due to these tests. Interestingly, Jill's blood could be the key to full immunity to the T-Virus and perhaps help other protagonists and agencies form better cures for worse virus outbreaks in future installments of the series. 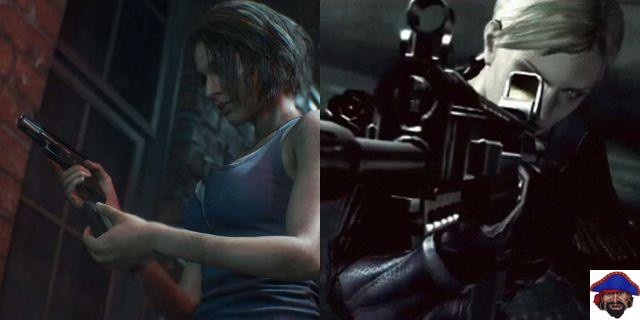 In addition to her STARS training and story-related enhancements, Jill may have gained specialized off-screen traits that really set her apart from her peers. In the Resident Evil 3 Remake, antagonist Nikolai Zinoviev wrote a report that states that Jill may indeed have immunity against the T-Virus. Fans will remember that Carlos Oliveira successfully vaccinated Jill from the infection in the same game. This report appears to solidify Albert Wesker's discovery that Jill's immune system had special properties that protected her against the lethal effects of the Progenitor Virus.

On a lesser note, Resident Evil 5 also demonstrated Jill being ambidextrous. First, fans can find a photo of Jill holding an M92F in her right hand. Meanwhile, the “Desperate Escape” DLC will see Jill firing a Sig 556 with her left hand. 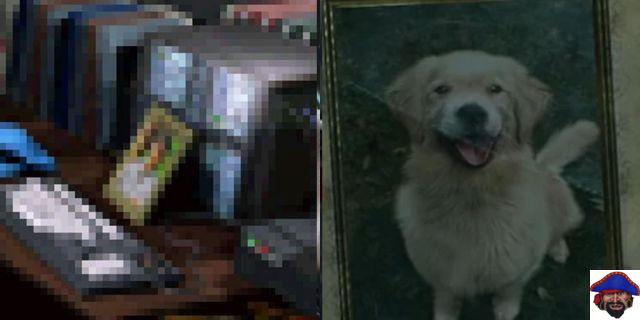 Players of 2's Resident Evil 1992 may find themselves exploring the STARS office at the Raccoon Police Station. Interestingly, fans may find themselves compelled to check out the various desks in said office, one of which belonged to Jill. Upon closer inspection, Jill's desk will have a picture of her and a young man. Fans can speculate that this man served as Jill's boyfriend. However, RE2 director Kazuhiro Aoyama clarified that this man simply served as Jill's "friend".

Interestingly, Resident Evil 2 and 3 Remakes have replaced this image. Instead of the same young, players can find Jill next to a Golden Retriever. 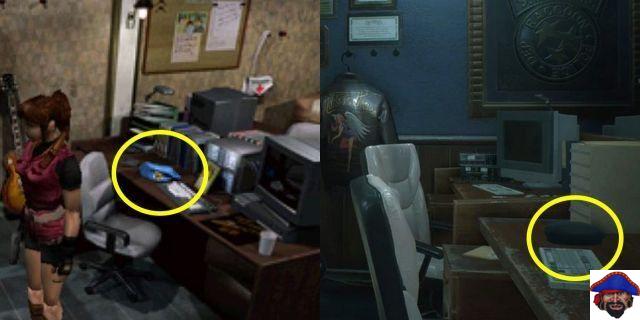 Players with a penchant for small details may recall that Jill discarded her beret at some point in the series. However, players can find her beret in two locations depending on the game they played. For example, players who played the original versions of Resident Evil 2 and Resident Evil 3 can join Beret at Jill's STARS table.

Interestingly, Resident Evil 3 Remake places Jill's discarded beret inside her apartment. Regardless, Jill can gain an extra piece of firepower by retrieving said weapon. Others might even say that Jill having her beret back is a sign of “returning to the fight”.